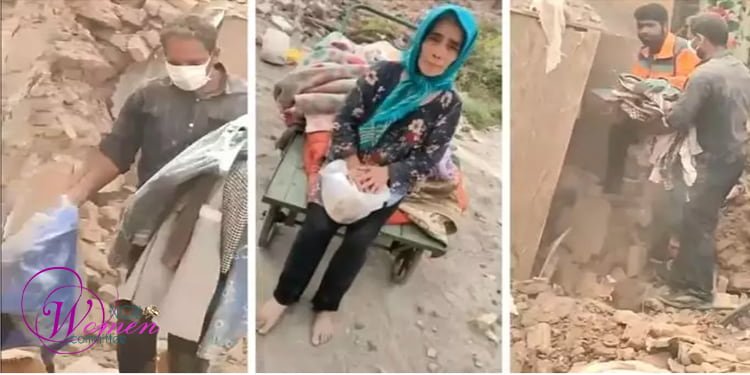 Municipal agents demolished the humble shelter of a female teacher in Rafsanjan, in southern Kerman Province.

She was taking care of her ailing mother at the time of the attack by municipal agents who arrested her.

According to the reports published on social media on June 17, the shelter of a female teacher with 30 years of experience and a master’s degree was destroyed by Rafsanjan’s municipal agents. All her furniture and home appliances were buried under the rubbles.

The agents attacked the small house on Quds freeway in the early morning hours. They forced the residents out and demolished the house with all its furniture.

The teacher whose small house was demolished said in a video clip:

They attacked the house in the morning. I was feeding my mother with a nursing bottle. She’s sick. She’s had a stroke and is now paralyzed and lying in bed. I heard the dogs barking.

I just wanted to say something; they had brought four women. They caught me. I told them I had a sick mother in this house. They said that is none of our business. (While showing her bruised hands, she continued:)

They caught me and pushed me into a car. My brother is a medical doctor. They arrested him while asleep and put him in the car, too. His son is a lawyer; they arrested him, too.

My cousin is a retired teacher. They arrested him and his wife.

I am a teacher in this country. I have a master’s degree. I educated your children.

Is this the condition of a teacher after 30 years of work?

Is this my life and living conditions? Is this the condition of a teacher who’s worked for you for 20 years? This is my money. It must be buried under the rubbles made by your loader because your banks are not credible.

You have buried all my life under the rubbles—all of my belonging.

What is our fault? Just that we’re living under your banner of misery.

At least 100 teachers were arrested during the teachers’ nationwide protests on June 16, 2022.

The teachers’ resolution in these nationwide protests said: Instead of reducing class divisions and poverty, government policies have targeted the food baskets of teachers and other wage earners, pushing the middle class below the poverty line at unimaginable speed.

Many teachers have been arrested and detained during these acts of protest. Now, one of the teachers’ most urgent demands is the release of imprisoned teachers.

The Iranian educators and teachers want the full implementation of the Civil Services Management Law. They say that only after implementing this law and the real ranking plan and accurate adjustments should the salaries of every retired and employed teacher exceed the poverty line. The same is true for newly hired and informal teachers. The end-of-service bonuses for retirees of 2021 and the arrears of casual teachers must be paid. Temporary teachers should also be formally employed.