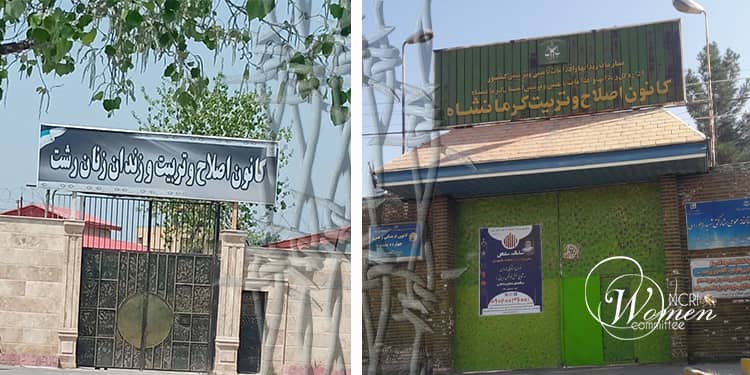 Female prisoners in Iran are subjected to miserable conditions.

Behind the walls of the mullahs’ black prisons, women experience the bitterness of being subjected to insults, humiliation, suffering, and pain. The most fundamental human rights of every prisoner are violated daily. Every day, prisoners are at risk of illness and death.

Lakan Prison in Rasht, and the Women’s Rehabilitation Center in Kermanshah, are among the prisons whose conditions are horrific for female prisoners.

The women’s ward of Lakan Prison in Rasht is located on the Rasht-Lakan Road, one hundred meters after the intersection of the Fooman-Saravan belt. The women’s ward comprises:

Quarantine Ward: Six meters wide and 20 meters long with 14 double beds. At the beginning of the Covid-19 pandemic, this space was used as an addiction treatment room. The number of prisoners in this quarantine ward varies from 7 to 30. The ward has permanent inputs and outputs.

Etikaf Ward: This space is more crowded than other prison wards because it houses detainees waiting to be sentenced or released.

Shakibai Ward: This space houses prisoners who have been sentenced and are serving prison terms.

Mahkoomin Ward: This space is also known as the convict ward. It has two rooms, a medium-sized yard, and no facilities. One of the rooms houses prisoners accused and convicted of murder (also called “under-retribution”). The second room houses other convicts. The overcrowding and noise level in a tiny area makes the space nearly unbearable.

Kanoon Ward: This space is a tiny room and yard with no facilities. The ward is separated from others by a fence.

The condition of women prisoners in the detention center of Lakan Prison, Rasht

Conditions in Lakan Prison for female prisoners, especially common criminals, are deplorable. Prison guards and other personnel routinely humiliate and assault the women. Most of the prison guards are criminals themselves, hired at low wages. Other guards are family members of intelligence agents or government officials. Among them are two female prison guards, Khabari and Faraji, who are members of government-affiliated families and Ministry of Intelligence agents.

Poor quality of water and food in Lakan Prison

The female prisoners must buy all their necessities from the high-priced and poor-quality prison stores. Prison agents sell the goods to prisoners at prices much higher than market rates. Families of prisoners do not afford to give their loved ones money for food. Thus, prisoners have no choice but to eat the same low-quality food in prison.

The prison store lacks fresh milk, fruits, and vegetables. Prisoners receive only 150 grams of dairy products per week. Food rations are insufficient, and prisoners generally stay hungry. The rations are not divided equally across all the wards, especially for female prisoners in the Etikaf ward.

Breakfast rations are served to prisoners at night, including a piece of bread, a 50-gram can of foul-tasting carrot jam, and lukewarm tea. Dry tea and sugar are distributed in the wards at the beginning of the month. If a new prisoner enters the ward in the middle of the month, she is deprived of receiving her food rations.

In Lakan Prison, two weekly rations of cheese are 100 grams per person.

Low-quality fruits and vegetables are sold once a week, but they are much more expensive than prices outside the prison. Each sale contains only 3 to 4 items, which may be spoiled. For example, prisoners once asked for eggplant and received 20 kilograms, of which about 4 kilograms were rotten.

There is no drinking water in some wards, and prisoners are forced to buy expensive water from the store. Despite frequent prisoner protests about the conditions, nothing has changed.

The prison’s doctor is a general practitioner, and no disease treatment is provided. A prisoner who needs a specialist must suffer while tackling bureaucratic challenges to get the prison warden’s approval for appropriate treatment.

The prison pharmacy only carries painkillers; all other medicines must be delivered to the prisoner by her family. However, this can only be done if prison personnel does not block access. Sick prisoners, such as those with diabetes, receive no special consideration.

Female prisoners in Lakan Prison can only use air for physical activity.

There are no books or newspapers in prison.

The prison’s cultural education system is limited to religious lessons. There are no other learning opportunities for prisoners.

The condition of women prisoners in Kermanshah’s Rehabilitation Center

Conditions in the women’s ward of Kermanshah Rehabilitation Center are reportedly deplorable. This prison is located a few kilometers from Kermanshah to Sanandaj and has two special wards for women and children.

According to prisoners’ families, about 70 women and a child are being held in five rooms in one of the wards. Most prisoners sleep on the floor since there are not enough beds for them.

Edris Abdi, the prison warden, allows prisoners to go outside for fresh air between 5:00 pm and 7:00 pm. At all other times, the female prisoners must suffer in an overcrowded, filthy, and unventilated space whose bathrooms lack doors.

The quality of the prison’s food is very poor, and the prison store sells food at exorbitant prices.

The prison warden forces prisoners to attend cultural and religious classes. If anyone refuses to attend, she is denied the right to have a weekly family visit.

The prison clinic lacks any specialized medical personnel. In a medical emergency, prisoners must wait several hours – and sometimes days – to be treated due to the lack of an ambulance.

Edris Abdi, the prison warden, and Hajar Korani, a security guard, insult, beat, and handcuff any prisoner who protests. Sometimes, they take the prisoner to solitary confinement with her hands cuffed and feet chained.