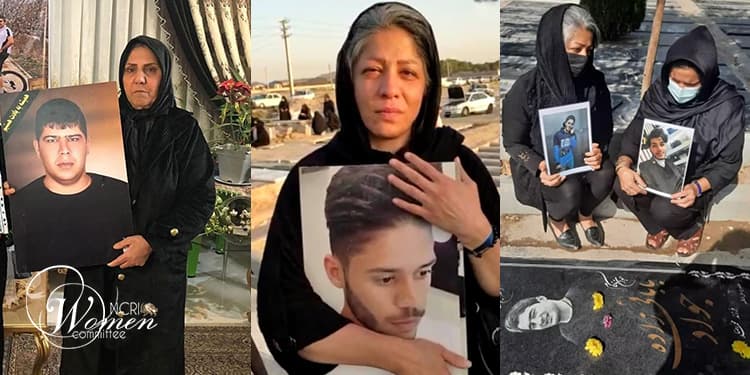 Mothers of victims of the November 2019 protests arrested, labeled ‘rioters’

In reaction to the spreading popular protests in Iran, the clerical regime has launched a wave of arrests in Tehran and other cities.

Sixty security forces arrested the mothers of the victims of the November 2019 protests, Mahboubeh Ramezani, Sakineh Ahmadi, and Rahimeh Yousefzadeh, at the latter’s residence in Tehran.

Also arrested was Somayyeh Jafarpanah, the sister of Mohsen Jafarpanah, another victim of the November 2019 protests.

Hours after the arrest of the mothers of victims of the November 2019 protests and several other relatives of the victims, the state-run Fars News Agency affiliated with the IRGC described the brave mothers as “rioters.” Fars wrote, “The detainees had contacts with an element with ties with foreign espionage services under the guise of seeking justice. They received money from a foreign financial liaison to create riot and insecurity in the country.” (The state-run Fars News Agency – July 11, 2022)

The names of the mothers arrested are as follows:

Mahboubeh Ramezani, the mother of Pejman Gholipour, 18, was shot five times by security forces in Tehran on November 17, 2019.

Somayyeh Jafarpanah, the sister of Mohsen Jafarpanah, who was 29 years old and had a young son. He was shot dead by security forces on November 17, 2019.

Mothers of victims of the November 2019 protests seek justice

The mothers of victims of the November 2019 uprising who seek justice for their children have a motto; “we shall not forgive nor forget.”

Their justice movement seeks the prosecution of all perpetrators and masterminds of the bloody crackdown on the November 2019 protests for committing crimes against humanity.

Supporting the mothers of victims of the November 2019 protests is a national and humanitarian duty.

The Iranian Resistance strongly condemns the recent attacks and arrests of the mothers of victims of the November 2019 protests and calls on Iranians, especially women and youth, to protest the regime’s repressive measures.

The Women’s Committee of the National Council of Resistance of Iran (NCRI) calls for urgent action by the High Commissioner and the UN Human Rights Council, and the UN Special Rapporteurs to have those arrested released, especially the mothers of the November 2019 uprisings’ martyrs.

We reaffirm the need to send an international investigative delegation to visit Iran’s prisons and talk with the prisoners, notably the political prisoners.