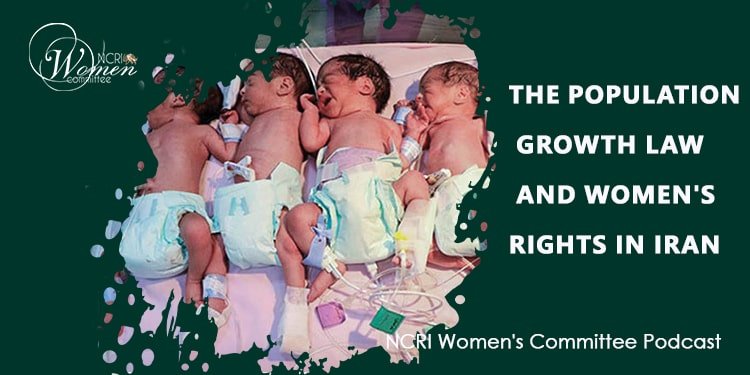 SDG 5.6 of the United Nations Sustainable Development Goals wants to ensure universal access to sexual and reproductive health and reproductive rights as agreed in the Program of Action of the International Conference on Population and Development and the Beijing Platform for Action.

In this podcast, the NCRI Women’s Committee will get into the details of how the Iranian regime has failed to give the minimum response to this SDG and even adopted a law that cripples women’s rights in this regard.

We’re going to discuss the Iranian regime’s Population Growth Law which has in practice had many grave consequences for women in Iran, the dangers posed to women by this plan and its impact on social ills, also the UN Experts reaction to the plan.

Its official name of the Population Growth Law is the Youthful Population and Protection of the Family law.

Like other measures, plans, and laws concerning women in Iran, the population growth plan aims to marginalize women and isolate them at home, deny their fundamental human rights, and suppress them because they are the most dissatisfied with the mullahs’ regime and are seen at the forefront of all protests.

By cracking down on women, the regime seeks to create an atmosphere of fear and terror in the entire society. This’s been the regime’s plan from the outset. By forcing women to wear the mandatory Hijab against their will, the regime expelled many women from their jobs and dared to attack them on the streets with clubs, pushing thumbtacks on their foreheads and splashing acid on their faces.

The Iranian regime doesn’t care about a youthful population because without any exaggeration, it is killing and jailing hundreds of young people every day. The only goal of its Population Growth Plan is to preoccupy people with secondary issues and the crackdowns in this regard, while the society is simmering with discontent and in a terribly volatile state due to the bankrupt economy, inflation, unemployment, poverty, and most of all, lack of freedom of speech and other fundamental freedoms.

They want to force this on women and the entire Iranian society. Let me read to you from the statement issued by UN experts in November 2021.

The UN rights experts called on the Iranian regime to repeal the new law that “severely restricts access to abortion, contraception, voluntary sterilization services and related information in direct violation of women’s human rights under international law.” They also said the consequences of this law will be crippling for women and girls’ right to health and represents an alarming and regressive U-turn” for the Iranian regime.

I really want to highlight this part of the statement which says, “This law violates the rights to life and health, the right to non-discrimination and equality, and the right to freedom of expression by making it illegal to access a range of reproductive health services and share information on reproductive rights, which amounts to the instrumentalization of women’s bodies and their reproductive capacity.”

The fact is that fertility rate in Iran has dropped nine folds in the past 36 years. In 1986, every Iranian woman gave birth to an average of 5.6 children. But now this rate has dropped to 0.6 children per woman. This is mainly due to poverty and repression. Young people are poor and they cannot buy a house or even rent an apartment and pay the expenses of a married life. Married couples are poor, and they cannot afford to feed their children, so they’d rather not have any children. Add to this the repressive conditions in society that discourage people from having children born into such heavily repressive society.

Therefore, the Population Growth law wants to force women to do what they really don’t want to. They don’t want and do not afford to have more children.

The regime also plays a dirty trick. They provide incentives to men to put pressure on their wives to have children. For example, they give exemption from conscription service to young men who have two children.