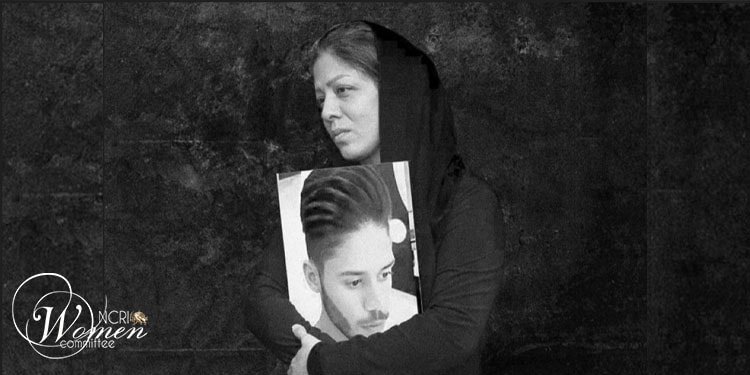 The bereaved mother, Mahboubeh Ramezani, has been sentenced to 100 lashes. The mullahs’ Judiciary issued the sentence in absentia several months ago.

Mrs. Ramezani’s son, Pejman Qolipour, was killed during the November 2019 protests by security forces in Tehran.

The news was published by Peyman Qolipour, Pejman’s brother, on his Instagram account. He said the Intelligence Ministry agents were waiting for an opportune moment to arrest his mother.

“The fact is that my mother’s only crime was seeking justice. They are so afraid of her because she cries out the truth. They fear her because she has not even put down Pejman’s photo for a moment.”

The bereaved mother, Mahboubeh Ramezani, and several other mothers and relatives of victims of the crackdown on the November 2019 protests were arrested on July 11, 2022.

According to some reports, the bereaved mother, Mahboubeh Ramezani, has been transferred to Evin Prison.

Peyman Qolipour said, “My mother was under pressure for a long time. They constantly intimidated her, and she had been summoned several times. A few months ago, they condemned her to 100 lashes, but that did not scare my mother. What do we have to lose after Pejman? What is left after November 2019? They were looking for an excuse to silence my mother. On July 11, the justice-seeking families were supposed to gather for their monthly reunion in the residence of Navid Behboudi’s mother.”

“My mother’s only crime is that she seeks justice. This is the most important reason they fear her. They fear her because she has not even put down Pejman’s picture for a moment.”

The bereaved mother exposed threats to her life

In an article published in April 2022, the bereaved mother, Mahboubeh Ramezani, explained: “After several times that (the security services) called my husband and I but we did not respond, they called my son. They told him to be careful. ‘If your family continues to do what they are doing, worse incidents will await them.’ My son told them, ‘My parents seek justice for their son.’ (The security services) replied, ‘Their son was an offender, and we killed him! Tell your parents to come here, or we will come and transfer them to jail.”

Reacting to the threats, Mahboubeh Ramezani reiterated, “The chests of all the families (of the victims of the November 2019 uprising) are ready for your bullets. Your threats, imprisonment, and torture are no longer effective. We will make you remorse. We will make you regret every single life you took over all these years.”

Since she lost her son in November 2019, Mrs. Ramezani has consistently sought justice for her 18-year-old son, Pejman Qolipour, and all the victims killed during the protests in November 2019. She has exposed the crimes of the clerical regime.

In May 2021, the bereaved mother, Mahboubeh Ramezani, revealed virtually in a video clip how the regime stalled her son’s murder investigation. “When I was looking for the camera above my child, I said, ‘Sir, show me this camera to find out who killed my child?’ After eleven months, they brought me a fake letter that the municipality had said that the camera had burned out on the 17th (of November) when my child was shot!”