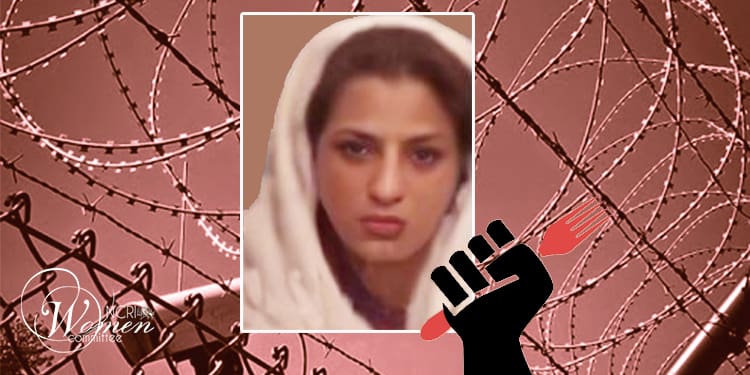 Leila Chegini began her dry hunger strike on Wednesday, July 13, 2022, in protest of being detained without standing trial and investigating her case.

Detaining prisoners on remand is a common practice in Iranian jails to torture prisoners. Since prisoners cannot access anyone during pre-trial detention, prison authorities and interrogators can do whatever they want.

Leila Chegini started a dry hunger strike while at risk of paralysis of both her legs. Nevertheless, she is not allowed to be seen by a doctor.

Due to her serious back injuries and bruised and swollen legs, she has repeatedly requested a doctor’s visit. She even undertook to pay the visiting cost. However, the Nowshahr Prison authorities have prevented her from going to medical facilities.

Political prisoner Leila Chegini cannot sleep at night due to pain. However, prison authorities will not let her use sedatives.

An informed source said, “The interrogators and torturers want to force Leila into making a false confession based on their scenario by harassing and depriving her of a prisoner’s basic rights.”

Despite her illness and pain, Leila Chegini had no option but to resort to a dry hunger strike to achieve her fundamental rights. Maybe in this way, she could convey her voice to the oppressive prison authorities.

Leila Chegini had previously gone on a hunger strike on April 27, 2022.

Political prisoner Leila Chegini, 43 and a mother of two children, is being tortured and beaten at Nowshahr Prison in northern Iran.

Intelligence agents arrested Leila Chegini at her home in Karaj on March 16, 2022.

Intelligence and security services allege that her charge is propaganda against the state.

Political prisoner Leila Chegini was transferred to the Department of Intelligence of Sari, the capital of Mazandaran Province, northern Iran. She was tortured and interrogated there for 20 days and subsequently transferred to Nowshahr Prison, where she was detained on remand.