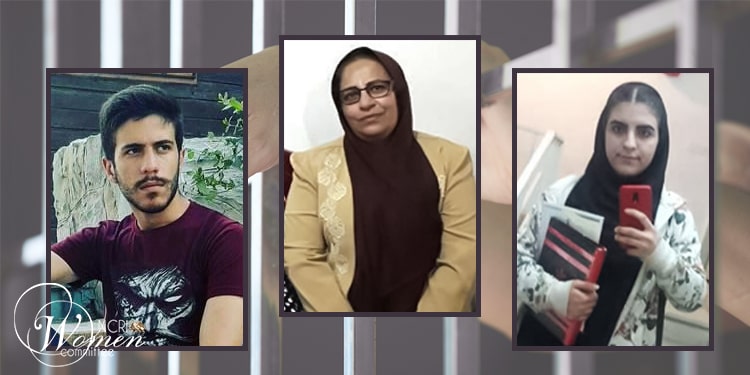 Zahra Safaei (middle), her daughter and her son

A further reason to deprive political prisoners of having family visits in Evin Prison.

The authorities of Evin prison are using a new excuse to prevent political prisoner Zahra Safaei from meeting her son, Mohammad Massoud Moini. He is also imprisoned in Evin Prison.

Evin authorities have demanded to see the birth certificate of Zahra Safaei’s husband to prove that she is her son’s mother to grant them family visits.

By such inhumane prevention of family visits, the authorities of Evin Prison are trying to ramp up pressure on political prisoner Zahra Safaei and her two children, both in prison.

In the past, when Zahra Safaei was detained in Qarchak Prison, prison officials collaborated with the Intelligence Ministry to prevent her family visits with her son imprisoned in Evin Prison.

Now that they are in Evin prison, there is no longer any obstacle to their family visits. However, prison agents have resorted to a new excuse to harass Mrs. Safaei and her detained son and daughter.

In response to Zahra Safaei’s request to have family visits with her son, Evin authorities have demanded to see her husband’s birth certificate, an informed source reported. “They want to verify their identities and determine whether they are from the same family.”

The source added, “They could not produce a worse excuse to prevent their meeting. The three have been charged in the same case and were tried in the same court. They visited Massoud two or three weeks ago when Mrs. Safaei and Parastoo Moini were still in Qarchak. Now, they don’t understand what changed in these few days. The prison officials are making up excuses to prevent their visits. They are torturing these prisoners mentally and psychologically.”

Political prisoner Zahra Safaei was denied a visit with her son, Massoud Moini, for more than three months while still in Qarchak Prison. Zahra Safaei and her daughter, Parastoo Moini, were also denied access to weekly inter-prison calls.

Despite writing numerous letters to the Prisons Organization, the head of Qarchak Prison, the prison supervisor, and the Judiciary, political prisoner Zahra Safaei could not visit her son, Massoud Moini. He was also imprisoned in Evin Prison.

Political prisoner Zahra Safaei and her daughter could call only once to speak to Massoud.

On July 20, 2022, Mrs. Zahra Safaei and Parastoo Moini were transferred to Evin Prison among 16 other political prisoners previously detained in Qarchak, violating the principle of separation of crimes.

Their condition in Evin Prison is more deplorable than in Qarchak Prison.

Her life is in grave danger as this political prisoner is being detained among prisoners convicted of violent crimes violating the principle of separating different categories of crimes.