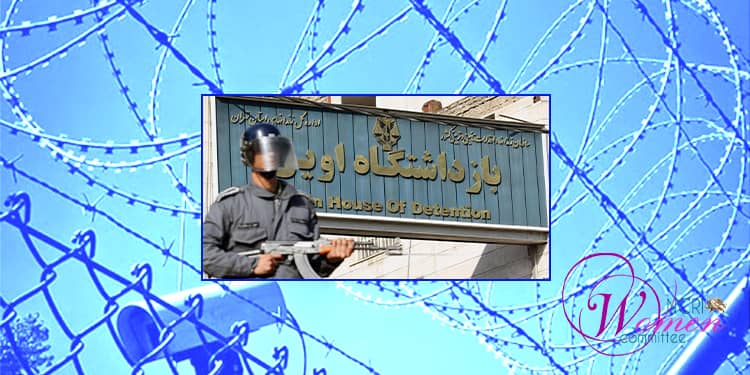 “Incarcerated women face many problems such as limited phone time and denial of phone calls on weekends, as well as lack of enough space to rest and study, lack of hygiene and detergents, problems with food, etc.”

These problems have increased in step with a new Coronavirus outbreak in prison. Lack of hygiene and detergent is a severe problem for women prisoners.

Political prisoners in the women’s ward of Evin

Political prisoners in the women’s ward of Evin have deplorable conditions. They have been denied face-to-face visitations due to the Coronavirus outbreak, and the prison authorities forced them to have cabin visits. In contrast, the windows of the cabins are filthy and covered with bars. These bars were previously made for dangerous prisoners, and political prisoners used the section without bars. Most of the phones in the visitation room are broken. The prisoners can neither see their relatives nor hear their voices.

Eighteen female political prisoners detained in Qarchak Prison were transferred to Evin Prison on July 20, 2022. Prison conditions in Evin are much worse than in Qarchak, and they face much harsher conditions.

The quarantine ward of Evin

Prisoners in the quarantine ward are deprived of basic sanitary facilities, a refrigerator, and a television. This place is more like a torture chamber.

According to the regulations of the Prisons Organization, fruits, vegetables, dairy products, and meat should be distributed among the prisoners for free, but the prison authorities steal this budget.

The prison store brings fruits, vegetables, and dairy with long delays. The prison mafia first takes the good items for themselves when it gets new items. The poor quality items go to deprived women prisoners and political prisoners.

Due to the overcrowding of the women’s ward of Evin Prison, the Coronavirus has spread widely in this ward, and many political prisoners have contracted this disease. However, the prison officials do not take any measures to isolate the prisoners and have deliberately prepared the ground for spreading the disease. This situation is while women prisoners are deprived of minimum medical facilities and necessary treatment.

The women’s ward of Khoy prison

The women’s ward of Khoy Prison also has deplorable conditions. Inmates in this prison suffer from hunger. Red meat is not included in the prisoners’ diet. Poultry is rarely used in food; one chicken is the food quota of 38 prisoners.

The women’s ward of Khoy Prison is located next to the facility building and the labor ward. This place is in a very abnormal situation, and there is no news about it.

Political prisoner Zeinab Jalalian was imprisoned in this terrible place for many years, where intelligence agents constantly harassed her. They continually pressured Zainab Jalalian to make televised confessions.