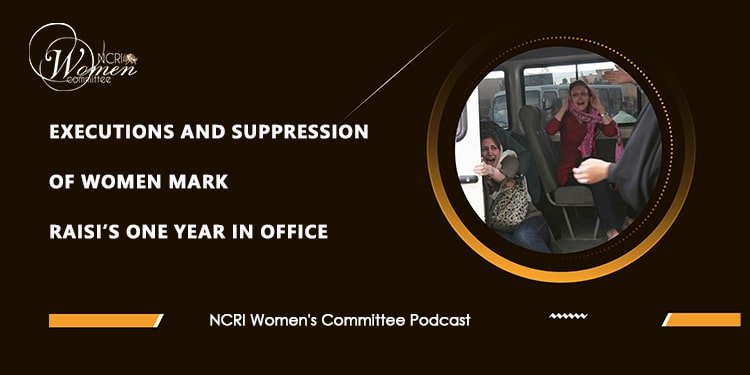 Executions and suppression of women mark Raisi’s one year in office.

August 3 marked the first anniversary of Ebrahim Raisi taking office in Iran after a rigged election engineered by the mullahs’ supreme leader.

The past year in Iran saw a staggering rise in executions and the clampdown on Iranian women. That’s in addition to a bankrupt economy with people becoming poorer every day, and a growing army of the unemployed and hungry.

We’re going to discuss the impact of Raisi’s presidency in Iran especially as it relates to women’s rights and conditions.

Who is Raisi and why did Khamenei pick him as his president?

Raisi is a mass murderer and one of the key perpetrators of the massacre of 30,000 political prisoners in 1988.

In short, Raisi earned his credentials in the regime as a stonehearted killer who moved up the hierarchy of power after the 1979 Revolution with a 40-year track record for execution and repression.

Raisi was Khamenei’s preferred choice for president because he needed such a criminal as head of the Executive Branch to confront the growing discontent and widespread protests.

And we can see that executions and suppression of women have seen an unprecedented new surge under Raisi.

Raisi is implicated in ongoing crimes

Yes, during the time, he headed the Judiciary, Raisi carried out direct orders from Khamenei and was personally involved in the clampdown on the nationwide protests and uprising of November 2019, where the forces under his command killed 1,500 demonstrators, which included 400 women. They also arrested and detained more than 12,000 protesters.

Many of these protesters were either killed under torture, or were forced to make false confessions against themselves, and then executed.

Of course, the Iranian regime has failed to acknowledge the existence of the mass graves of the victims of the 1988 massacre, publicly and officially. They’ve concealed their locations, causing immeasurable suffering to the families who are still seeking answers about their missing loved ones.

So, according to international law, this crime against humanity, the crime of enforced disappearance, persists until the state reveals the fate or whereabouts of the victim, if the disappeared person is dead, the state must return the remains of the victim to his/her family.

And Raisi is implicated in all these crimes against humanity.

The number of executions saw unprecedented surge under Raisi

Twenty-two of those executed this year were women. Again, compare that to the average of 15 women executed per year since August 2013.

On August 1, the state media in Iran reported that the blinding verdicts for two men and a woman would be implemented.

The situation is so horrible Amnesty International issued a press release pointing out that “the Iranian authorities have embarked on an execution spree.” It warned that if executions continue at this horrifying pace, they would soon surpass the total of executions recorded for the whole of 2021. Amnesty also underlined that the executions are systematically carried out after grossly unfair trials.

Amnesty International added and I quote “The state machinery is carrying out killings on a mass scale across the country in an abhorrent assault on the right to life. Iran’s staggering execution toll for the first half of this year has chilling echoes of 2015 when there was another shocking spike.”

A remarkable escalation in the suppression of women

That’s true. The scale of harassment of Iranian women and their arrest and detention this year has been more horrendous, reminding one of the early years of the mullahs’ regime.

On July 5, Raisi ordered the re-implementation of a plan adopted in 2005 to enforce the compulsory veil. So, the clampdown on women took an unprecedented height in early July, affecting all areas of the life of Iran’s freedom-loving women.

For example, two new IRGC bases which started their work in May to monitor women and impose more restrictions on them at work and in public.

The regime unleashed its plainclothes and official guidance patrols in the streets who are very violent in dealing with women whom they consider improperly veiled.

Ebrahim Raisi’s only achievement after one year has been the enforcement of the Hijab and Chastity Law against women. That’s in addition to a staggering increase in the wave of executions.

However, these repressive measures only fuel the people’s anger and discontent.

Iranian women are at the forefront of protests and uprisings. By forming resistance units and participating in their activities, they play a valuable role in the uprisings to overthrow the mullahs’ regime.

Iranian women and youth will undoubtedly overthrow the clerical regime.

In the meantime, the international community must not recognize Raisi as president.

The families and survivors of the victims of the 1988 massacre, the November 2019 protests and other victims of the clerical regime, urge the UN not to grant visa to this mass murderer and the killer of the Iranian people.

Instead, the UN needs to arrange for an international tribunal to prosecute Ebrahim Raisi for his crimes against humanity especially in the summer of 1988.