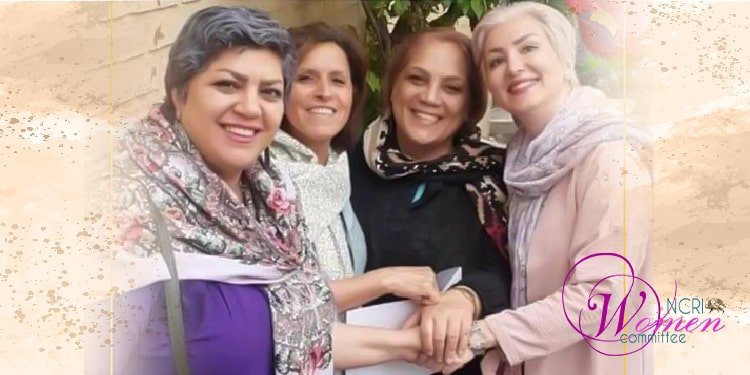 No prison can silence the voice of women wanting equality

Four members of the Voice of Iranian Women Association (Neda-ye Zanan-e Iran) were summoned to the Prosecutor’s Office of Evin Prison on August 18, 2022, to begin serving their prison sentences.

The charges against the four women include “promoting corruption and prostitution,” “association and collusion against national security,” and “propaganda against the state.”

The four women’s rights activists and members of the Voice of Iranian Women Association (Nahid Shaqaqi, Akram Nasirian, Maryam Mohammadi, and Esrin Derkaleh) wrote on their Instagram pages, “In the past few days, the Evin Prison Prosecutor’s Office has summoned us to prison on charges of forming the Iranian Women Association. The Judiciary is pressuring the bail-holder to confiscate our bail and put us in jail. They are sending us to prison on charges of association and collusion against national security, while the mafia thieves and embezzlers have endangered the lives of millions of people, yet they remain free.”

The Iranian Women Association’s members continued, “We have only tried to be the voice of protests against discrimination and inequality for Iranian women. But the swindlers’ glossary considers this act of defense a crime. The walls of no prison can silence the call for women’s equality.”

The Neda-ye Zanan-e Iran Women Association is a non-governmental group that focuses its activities on communicating the suffering, frustrations, and successes of Iranian women in society. According to its members, the association is trying to empower women to achieve a better life from the cyclone of discrimination and struggles.

Background on the arrests of the Voice of Iranian Women members

Mmes Nasirian and Shaqaqi had been summoned to the 2nd Branch of the Prosecutor’s Office of Evin Prison on September 4, 2019. On September 8, 2019, both women activists reported finding out that their bail bonds had increased. They gained their temporary freedom by paying the bail. They were again arrested in April 2019 and detained for a month before being released on bail.

Another member of the Voice of Iranian Women Association, Maryam Mohammadi, was arrested on July 8, 2019, in Garmsar. She was taken to solitary confinement in the Intelligence Ministry Ward 209 in Evin Prison. She was confined for a month in solitary and subsequently transferred to the Women’s Ward. Ms. Mohammadi was a political prisoner in the 1980s. She was arrested in 1981 at the age of 14 and remained in detention until 1989. She has two daughters, 18 and 28 years old.

Esrin Derkaleh, another member of the Voice of Iranian Women Association, was arrested in Garmsar on July 28, 2019, and taken to Ward 209 of Evin Prison. She was born in 1983 and is the mother of a 20-year-old.