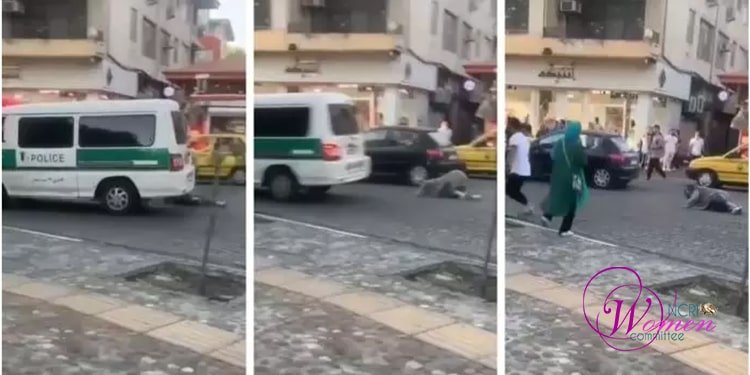 A video clip posted on social media on Saturday, August 20, 2022, shows a woman being thrown out of the Guidance Patrol van in Rasht, north Iran.

Hours after the video was released, the State Security Forces (SSF) claimed that the news of throwing a woman out of a van was “a false rumor.” The SSF made this claim to counter popular outrage and protests against the act.

Hossein Hassanpour, the second-in-command of Gilan Province’s SSF, said, “The female citizen hanged herself from the police vehicle’s window while it was on the move. Claims of throwing her from the security patrol vehicle are purely false and immoral.” (The state-run Khabarfoori News Agency – August 20, 2022)

Khamenei, the supreme leader of the mullahs’ regime, said on July 27, 2022, while in a crowd, one person asked me, what is your line of defense towards the West in the case of women? I said I do not have a defense, I will attack!

Mohammad Saleh Hashemi Golpayegani also spoke of the new Hijab Plan on August 20, 2022, stating, “In the new Hijab Plan, we have discounted the crime of removing the hijab to a violation degree. But it is, however, efficient and effective, and can be implemented.”

Golpayegani defined the Guidance Patrol’s standards regarding women’s hijab. He said, “according to religious criteria, a woman with one strand of hair exposed is a criminal. She should be arrested. When a person without a hijab enters a shop and the shop owner does not warn her and provides service to the person, the Guidance Patrol will charge the shop owner.” (The state-run Mizan News Agency – August 20, 2022)

Repression and harassing women in Iran with the excuse of improper hijab is one of the main tools of religious fascism to silence all of society and distract Iranians from demanding the regime’s overthrow.

Enforcing the compulsory hijab was one of Khomeini’s first acts that took place just a few days after the 1979 Revolution against the Iranian monarchy. He championed the slogan, “Either the veil or a hit on the head.”

This law has existed for the past 40 years by the clerical rule, but as dissatisfaction in society increases, we see an increase in arrests and executions, as well as a new wave of attacks against and harassing women in Iran under the pretext of protecting the compulsory hijab law.

In the summer, when people are in greater need of lighter clothing – and especially this year as extreme heat, water shortages, and economic problems have overwhelmed people – government agencies and plainclothes agents, who are permitted to fire at will, have more excuses to commit acts of violence against women.

Reports and public images on social media have shown guidance patrols deployed in various parts of the city as they violently grab women and girls, shoving them into patrol vehicles before taking them away. Government-affiliated plainclothes agents are also free to insult women and abuse them.