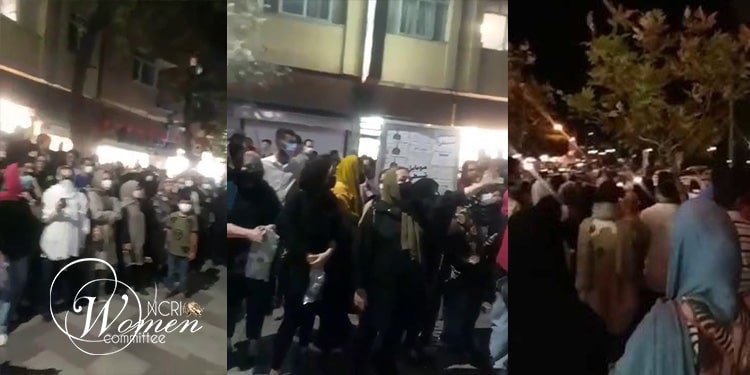 Protests in Hamedan, west Iran, on August 25, 2022, reached the third night of consecutive strikes to demand running water. The ruling mullahs in Iran have denied Iranians the right to access water and freedom.

Thirsty women in Hamadan are the first victims of the recent water crisis. But brave women, like those in Hamadan, are at the forefront of protests in Shahr-e Kord SW Iran, and Isfahan. Thirsty women in Hamedan chanted slogans blaming the clerical regime for this situation. Some of the slogans were as follows:

On the third night of the water protest thirsty women and youth came to Bu-Ali Sina St. in Hamedan and shouted the following slogans:

Don’t be afraid, we are all together.

The mullah must get lost.

Iranians will die but will not give into tyranny.

The first day of the consecutive water strike by the angry people in Hamedan began Tuesday, August 23, 2022, after days of suffering thirst. Residents in Hamedan faced a serious drinking water crisis a week before protests struck. Residents and especially thirsty women who suffer intolerable conditions gathered in Bu-Ali Sina square, where the tomb of the great Iranian polymath lies, to set the first night of protests.

The water status of Ekbatan Dam, which is one of the main drinking water sources in this region, has been reported to be dire.

Mrs. Maryam Rajavi, the President-elect of the National Council of Resistance of Iran, saluted the brave women of Hamedan and said, the clerical regime massacres the Iranian nation’s generation and origins. Every city should strongly protest.

The people of Shahr-e Kord took to the streets today, Tuesday, 16 August 2022, to protest the lack of water in their city for more than a week in the heat of summer. People do not have access even to drinking water. The brave women of Shahr-e Kord were actively at the forefront of the protests.

The people and brave women of Shahr-e Kord marched to the office of the Governorate, chanting “death to Raisi” and “death to incompetent officials.” They cried out, “We are thirsty.”

“Only by taking to the streets can we earn our rights,” the people and brave women of Shahr-e Kord chanted. Young people also booed the State Security Forces as they intervened.

Shahr-e Kord is the capital of the Chaharmahal-o Bakhtiari province in southwestern Iran.