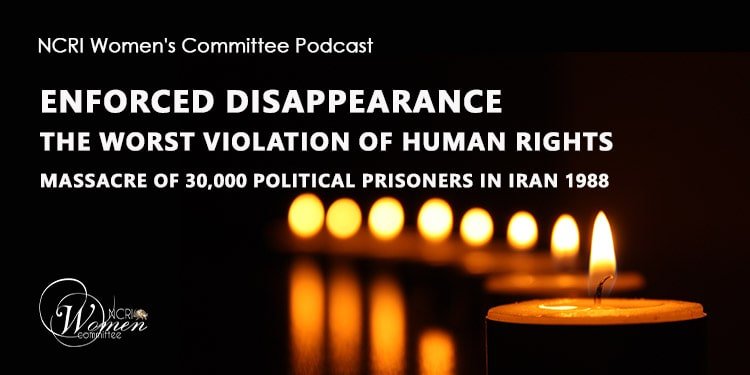 Yes, August 30 marked the International Day of the Victims of Enforced Disappearances. Amnesty International published a document in December 2018, Iran: Blood-soaked secrets, which shed light on the 1988 massacre in Iranian prisons and why they are considered ongoing crimes against humanity.

For 34 years, the Iranian authorities have refused to disclose the fate and whereabouts of thousands of political dissidents who were forcibly disappeared and extra-judicially executed in secret during Iran’s 1988 prison massacres. This chapter is among the darkest and most outrageous in the Iranian people’s history and represents a state-sponsored crime. The deaths of thousands of the victims remain unregistered and there are thousands of missing bodies buried across the country in unidentified mass graves.

The Iranian authorities have failed to acknowledge the existence of these mass graves and concealed their locations causing immeasurable suffering to families who are still seeking answers about their missing loved ones publicly and officially.

In his report to the UN General Assembly, Prof. Javaid Rehman, noted that, “Impunity and attempts to destroy evidence of past violations continued during the reporting period, including in relation to the summary executions and enforced disappearances of political dissidents in 1988.

He said in May 2022, it was reported that the authorities had put up large concrete walls and surveillance cameras in Khavaran cemetery, which contains a mass grave believed to hold the remains of victims of summary executions and enforced disappearance of 1988.

It is believed that these measures are aimed at restricting access to the site and facilitating the destruction of evidence.

Prof. Rehman said, these measures are the latest in a series of measures to interfere with the evidence of the executions, which have included bulldozing of gravesites and forcing members of the Baha’i community to bury their dead between existing graves or at the Khavaran mass grave site,.

Through long years of research done by the Iranian Resistance, we know today that the Iranian authorities forcibly disappeared and executed thousands of imprisoned political dissidents in secret and dumped their bodies, mostly in unmarked mass graves, between July and September 1988.

The Iranian authorities have concealed the killings as state secrets, tormenting the relatives by refusing to tell them how and why their loved ones were killed and where they are buried. No official has been brought to justice and, in some cases, those involved hold or have held positions of power in Iran. The Iranian Resistance has called on the UN to set up an independent investigation to help bring those responsible for these abhorrent crimes to justice.

One of the cases that shows the depth of the tragedy is the case of the siblings of Maryam Akbari Monfared.

The UN Special Rapporteur Javaid Rehman reported in his latest report to the UN General Assembly that Maryam Akarbi Monfared, remains imprisoned for the thirteenth year in Semnan prison for calling for accountability for the enforced disappearance of her family in 1988 and is deprived of adequate health care for liver disease. She has to date not received any furlough and her family’s several requests for transfer to Evin prison remain unanswered.

Maryam Akbari Monfared sought justice for her siblings, Abdolreza and Roghieh Akbari Monfared, executed during the 1988 massacre, and two other brothers executed in 1981 and 1984.

First, she filed her complaint with the Iranian Judiciary, but they did not respond to her case. Instead, prison authorities increased pressure on her. She was deprived of medical treatment and banished to a remote prison where her daughters cannot regularly visit her.

The judge presiding her trial said she was paying the price of her siblings who were supporters of the opposition PMOI/MEK.

Now, recently, mullah Hossein Mousavi Tabrizi, the regime’s prosecutor general in the 1980s, said, the families of those executed in the 1988 massacre could have complained, but they did not do so!

Maryam Akbari Monfared reacted by writing an open letter from behind bars.

She said in her letter, “I did file a complaint after three decades. What did you do to me except making threats, banishing me, and continuing to detain me illegally?”

So, from the case of Maryam Akbari Monfared, we can see that families are coming forward for justice, but they’re put in prison for seeking the truth.

The notorious president in Iran, Ebrahim Raisi, was one of the Death Commission members conducting the massacre. He has plans to be at the UN General Assembly in New York. Iranians across the globe are rejecting such an invite on #NoVisa4Raisi.