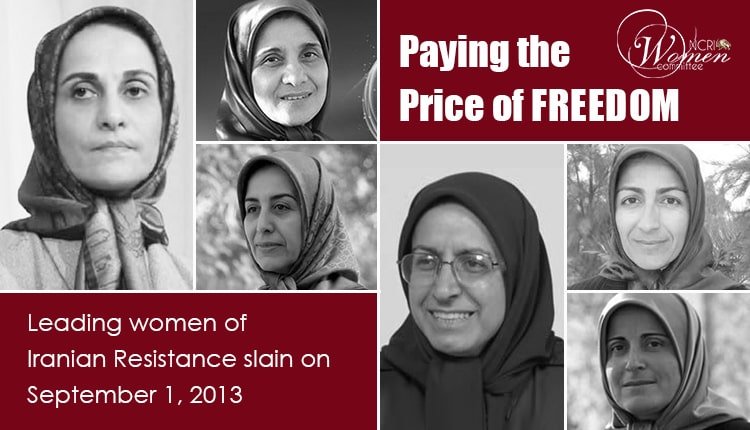 The struggle by the Iranian opposition movement is being led by selfless women who have sacrificed everything in their own lives to bring freedom and democracy to their people in Iran. Over the years, these leading women have become indispensable to the Iranian opposition in its struggle for regime change and democracy. So, at every crucial juncture, Iran’s leading women are seen playing a crucial role in the movement.

The Iranian regime sought to deal a shattering blow to its main existential threat, the PMOI/MEK, prior to the negotiations in Geneva where it had to give up its nuclear weapons program in exchange for the lifting of crippling sanctions. So, the cowardly attack on defenseless people in Ashraf was launched to overshadow the regime’s weaknesses at a crucial juncture.

Giti Givechinian, 55, Assistant Secretary General of the People’s Mojahedin Organization of Iran and Chairwoman of the Security and Counter-terrorism Committee of the National Council of Resistance of Iran. She had a B.A. in psychology and was engaged in the struggle for 34 years. She was also known for her risk-taking, patience, tolerance, strength, and qualifications in various fields.

Mitra Bagherzadeh, 54, is a senior member of the PMOI Leadership Council. She had studied management and was involved in the movement for 34 years. She was from Abadan and was known for her resolve, determination, and invincible faith in her cause. She was in charge of the team handling legal affairs of Ashraf at the time.

Fatemeh Kamyab, 52, is a former political prisoner from Rasht and a member of the PMOI Leadership Council. She was involved in the Resistance movement for 30 years. She was known for her selflessness and honesty and she was in charge of Ashraf’s logistics at the time of the massacre. Two of her brothers had been previously executed by the Iranian regime.

Maryam Hosseini, 49, is a former political prisoner for four years and a member of the Leadership Council. She was involved in the movement for 31 years. She was in charge protection of Ashraf when she was handcuffed and shot at the time of the massacre.