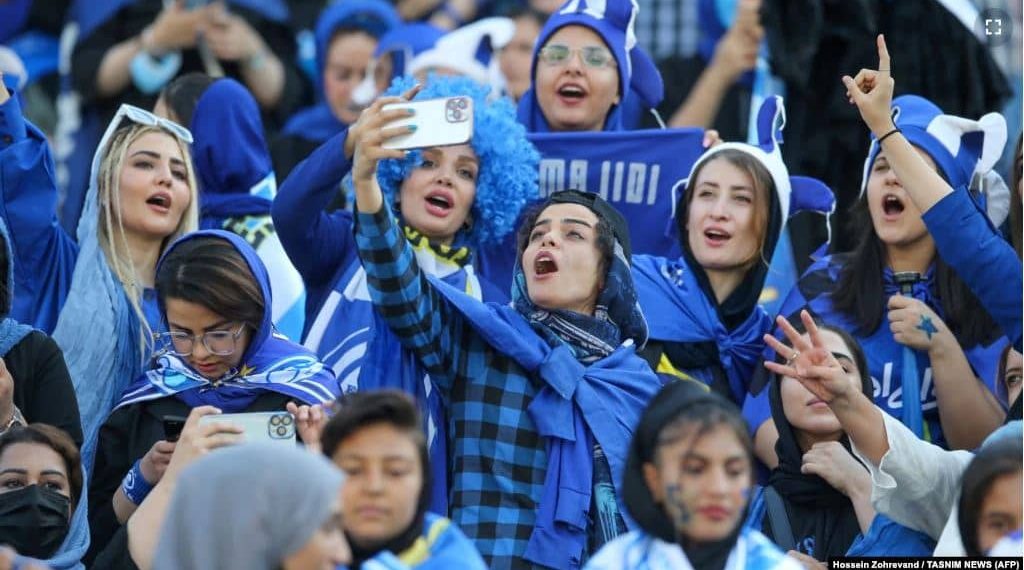 Only 500 seats given to female fans of Esteghlal team

Under pressure from FIFA, the Iranian regime allowed the entrance of a group of female football fans and other female fans of Esteghlal team to Azadi Stadium on August 25, 2022.

The league’s organization opened its official online ticket sales for women on Wednesday afternoon, August 23, 2022, for only 15 minutes. Esteghlal’s female fans and other women who gained information about such a possibility had been waiting for this moment.

Iran’s football federation announced that only 500 tickets would be sold to women. The regime’s news agency, ISNA, reported that only 500 women were present at Azadi Stadium (The state-run isna.ir – August 25, 2022).

FIFA sent a letter to the Iranian Football Federation on July 29, 2022. FIFA demanded that women, like men, enjoy the right to watch the new season’s Premier League games in all Iranian stadiums.

On August 3, 2022, reporters asked Hamid Sajjadi, the Youth and Sports Minister, “Is it likely that with FIFA’s letter, women will be allowed into the stadiums for the starting weeks of the new league?”

For more than 40 years of its rule, the clerical regime has always prevented women from entering the stadiums by claiming that the necessary infrastructure for women’s participation in stadiums is unavailable. But if pressured by the World Football Federation, it will have to retreat again in this regard.

Ironically, the regime mobilized its female supporters for a government ceremony on May 26, this year, to appear on the spectators’ platforms at Azadi Stadium, and there were no infrastructure problems!

When the door of parking lot number 21 of Azadi Stadium was opened for women, three groups of women gathered there. The first group was women who had tickets in hand and managed to purchase tickets through the ticket sales site.

The second group was the female fans of Esteghlal, who managed to enter Azadi Stadium with the club’s support. The third group was women who could buy tickets for the match from the black market around the stadium for 200 to 350 thousand tomans. But these tickets’ barcodes were not read, and they were not allowed to enter. (The state-run isna.ir – August 26, 2022)

Women who came with their husbands, brothers, or sons had to be separated at the front door.

While women and girls were entering the stadium, a woman behind the east door speaker constantly reminded women to wear hijab.

She even pointed directly at girls in some cases and said, “Cover your hair completely!”

The game started at 7 p.m. The special guards outside the stadium were trying to disperse many women who were not allowed to enter. One of the women in the crowd cried out and called on everyone to stay. She emphasized that you cannot enter the stadium if you leave the place.

One of the special guard officers shouted to the women: “Move away from the front door! Hang from those trees, but don’t stay here! You are not allowed to enter.”

Female football fans chant in memory of the ”Blue Girl!”

The state television censored the scenes of women’s presence in Azadi Stadium in the live broadcast.

The female fans of Esteghlal chanted in unison, “Blue Girl!”

These girls, who were all wearing blue clothes, brought to life the memory of Sahar Khodayari, nicknamed the Blue Girl, one of the fans of Esteghlal team. She self-immolated two years ago after she received a prison sentence for attempting to enter the stadium.

Women and youths also shouted the name of Voria Ghafouri, the former captain of the Esteghlal team. When Voria Ghafouri entered the stadium, all spectators shouted in one voice, “Voria, your words are the nation’s words.”

Voria Ghafouri was banned from working and appearing on TV or any visual broadcast because he voiced his support for widespread protests in Iran.

Women’s presence in Azadi Stadium was just a maneuver

After the Premier League match between Esteghlal and Mes-e Kerman, the game between Persepolis and Aluminum of Arak teams was held in Arak.

On August 26, more than 200 women in Arak gathered outside the hotel where they stayed and the sports stadium, chanting slogans and demanding to enter the stadium. They wanted to enter the city’s club to watch the football match between Persepolis and Aluminum of Arak. The Iranian Football Federation, however, did not allow the women to enter despite FIFA’s letter. FIFA had declared that all matches of the Iranian Premier League must be played in the presence of male and female spectators.

According to the Football Federation, no stadium except Azadi Stadium is allowed to host male and female spectators at the same time.

Ensieh Khazali, the clerical regime’s deputy for women and family affairs, made a strange comment about women entering the stadium:

“As an official, I decided to enter the stadium unofficially during the Iran-Iraq match. I saw all the parts that women had to use. Transportation and other facilities were available for women! Protection and security forces were all women. Because of the distance, no sound could reach the women’s section from the men’s. And the parking lot and entrances were separate. I didn’t see a single man during my journey!”

Khazali added, “This provided peace of mind for us whose daughters enter such environments.”

Judging from her remarks, it is unclear whether Ensieh Khazali wants to take women to prison or the stadium! Even when she takes the gesture of supporting women, Khazali cannot distance herself from the ruling misogynist thoughts and preaches gender segregation. While publicly, she should be defending women’s freedoms.