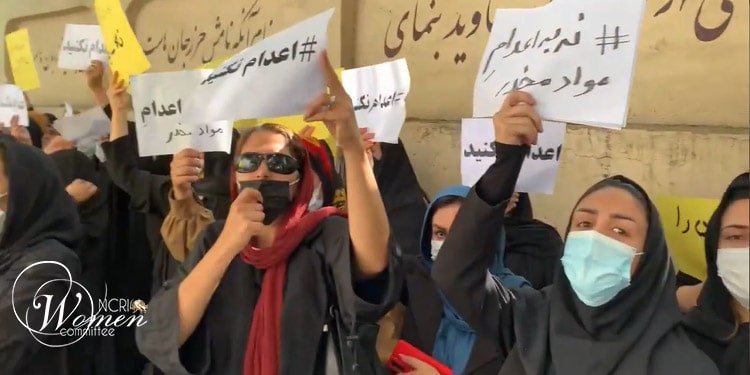 The families of death row prisoners in Iran continued their protests against the death penalty and the execution of their loved ones for the fifth consecutive day on Sunday, September 11, 2022.

With chants of “Don’t Execute,” the death row prisoners’ wives, elderly mothers, children, and relatives have been holding protest rallies in Karaj and Tehran. They demand the Iranian Judicial authorities stop executions.

Many death row prisoners, including 1,000 in the Central Prison of Karaj, face imminent execution. The Judiciary’s order to expedite the implementation of death sentences has made the families of death-row prisoners increasingly concerned.

The families of death row prisoners in Karaj and Qezel Hesar prisons gathered outside the Revolutionary Court of Karaj on Tuesday, September 6, 2022. They want to stop the execution of their loved ones and save their lives.

Iraj Fattahi, the head of the Central Prison of Karaj, told the families, “We are only carrying orders! The Judiciary has issued the execution order.”

On Wednesday, September 7, the families of death row prisoners went to Tehran and gathered outside the office of the Judiciary. They protested the vicious implementation of executions in Iranian prisons, including in Karaj and Qezel Hesar.

More than 300 persons have been protesting outside the Judiciary office in Tehran since Wednesday, calling for a moratorium on implementing the death penalty. However, none of the Judiciary officials came to listen to the protesters’ demands or talk to them.

On the third day, one protester wailed, “Whatever they killed is enough. How much longer should we mourn our loved ones? How much longer will they kill us, and we should say nothing? Do we deserve to be poor? Does anyone have any sense of our poverty? No one wants to understand what it means when you don’t have anything. We mourn the best children of our homeland. We are mournful. Our clothes are black. We don’t want them to kill anyone else after this.”

On Sunday, September 11, the families of death row prisoners initially gathered outside the mullahs’ parliament. But the State Security Force (SSF) clashed and dispersed them. So, the families continued their protest outside the headquarters of the Judiciary. The SSF arrested several of the protesting youths.

In response to the arrests, families cried out, “We are here to save the lives of our loved ones. Detaining us is not the correct answer. We demand a reduction in the death sentences!”

The families of death row prisoners chanted, “Do not execute!”

Ebrahim Raisi’s first year of the presidency has seen a significant increase in executions, including of women, throughout Iran.

At least 23 women have been executed under Ebrahim Raisi since he took office on August 3, 2021.

The Iranian Resistance urges the international community to take action to stop the executions in Iran.