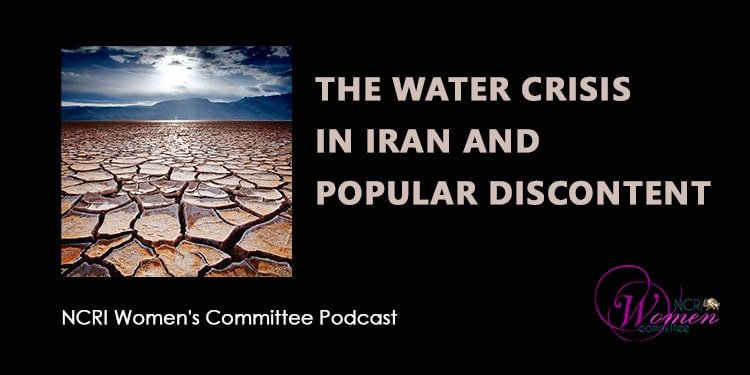 Water is the most essential element of life but do you know why millions of Iranians are deprived of decent access to clean water despite the country’s wealth of resources? The water crisis in Iran is what we discuss and find out how deep in crisis Iran is, regarding SDG6.

SDG6 aims to ‘ensure availability and sustainable management of water and sanitation for all.’ With water protests continuing for days in Hamedan, it’s evident the situation is dire for Iranians.

The reports from the city of Hamedan in western Iran say that residents didn’t have a single drop of potable water for five days. The only water coming from the pipes was dirty and not suitable even for washing. In fact, the lake behind the local Ekbatan Dam in Hamedan has dried, leaving nothing but a muddy wetland.

The city’s population of over half a million has been promised water supply from 12 wells! Which in turn is predicted to endanger farmers. But again the regime is only concerned about its own survival. It wants to prevent the “water crisis” from evolving into a “security crisis.”

We saw the same pattern in Shahre-Kord in southwest of the country where thirsty Iranians reached their limits after several weeks of water shortage and cut offs.

The regime tries to cover up the water crisis and the big reality that with such a devastating trend, Iran’s water resources will diminish within the next 50 years.

But that is too big of a reality to cover up. The local population in Isfahan has started to clear out its neighbourhood ever since the regime opened fire on protesting farmers angry over their water quota and the drying up of Iran’s largest river, the Zayandeh Rud.

Many protesters, including women and teenagers, were shot in the eye on that day. And they’ve been scarred for life by the repressive state security forces and the IRGC.

The drying up of Lake Urmia, the largest lake in Iran, and other rivers, lakes, wetlands and marshes are there for all to see. And people are experiencing the water crisis and shortage every day.

Iranians describe these phenomena as “Land Death” and a “silent earthquake” in the making.

Now why is this happening? Because the mullahs do not care about the people and the nature. They just focus on filling their own pockets and push forward the IRGC’s unpopular strategies.

By its disastrous water policy and by failing to meet the country’s water needs, the Iranian regime is creating waves of migration from villages and small cities and towns to the major metropolises where people would have to live in the outskirts and slums.

The drying of Lake Urmia

Other countries in the Persian Gulf, with drier deserts, are achieving higher water technologies compared to Iran. And when the United Nations’ SDG6 referes to water efficiency and water-related ecosystems, the national crisis at Lake Urmia is symbolic of the water crisis in Iran.

Lake Urmia in northwestern Iran is 140 km from north to south and 80 km from east to west. It was the largest saltwater lake in the world after the Caspian Sea until two decades ago. Sadly, 95% of the lake has dried up and disappeared. In 1978, UNESCO  registered Lake Urmia and its ecosystem among the world’s natural and protected monuments. The construction of 35 dams on 21 rivers pouring into Lake Urmia has had a significant impact on the drying up of the once flourishing lake. The regime is also killing the lake by pouring in polluted industrial wastes.

There is a huge void of modern water supply networks in Iran. The management is politicized and unwise, which has worsened the ecological and water crisis to the point of no return.

By current destruction of natural resources, Iran’s authorities have shown that they are against the preservation of the water environment.