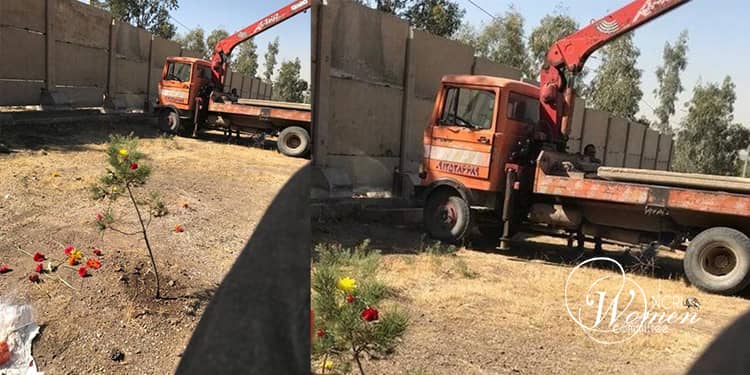 Amnesty International (AI) announced on September 13, 2022, that in recent months the Iranian authorities have erected 2-meter-high concrete walls around the Khavaran cemetery. The Khavaran cemetery is where, according to eyewitnesses, lay mass graves of several hundred political dissidents. They were associated with the Mujahedin-e-Khalq (PMOI/MEK), executed in secret in 1988.

AI has told states engaged at the UN Human Rights Council to call on the Iranian authorities to stop concealing the mass graves of victims of the 1988 “prison massacres” and immediately open an international investigation into the extrajudicial execution and enforced disappearance of thousands of dissidents amounting to ongoing crimes against humanity.

“The Iranian authorities cannot simply build a wall around a crime scene and think that all their crimes will be erased and forgotten. For 34 years, the authorities have systematically and deliberately concealed and destroyed key evidence that could be used to establish the truth about the scale of the extrajudicial executions carried out in 1988 and obtain justice and reparations for the victims and their families,” said Diana Eltahawy, Deputy Director for the Middle East and North Africa at Amnesty International.

The Khavaran cemetery is a piece of land located outside Tehran. It is considered one of the biggest graveyards that contain graves of thousands of PMOI and other political dissidents executed in the summer of 1988.

There were thousands of young women and girls among the executed. They were students and educated women, including doctors and engineers. Several others were athletes and nurses, too.

Five security cameras have also been erected both inside the Khavaran mass grave site and in the street outside to intimidate mourning families and deter members of the public from visiting the site to pay their respects.

Amnesty International has reviewed photographs and video footage of the new walls and security cameras to corroborate the accounts of family members who have visited the Khavaran mass grave site since late May 2022.

Many mothers, wives, and sisters of these martyrs still do not know the exact burial spot of their loved ones. They only know that their child is buried in the Khavaran cemetery.

To further conceal the fate and whereabouts of the victims, the authorities have also refused to issue death certificates and removed victims’ names from burial records.

Destruction of Khavaran cemetery in 2021

The families and mothers of the victims of the 1988 massacre gathered in Khavaran Cemetery on Thursday, May 13, 2021, to express their condemnation of the regime’s destruction of the site of the mass graves of their loved ones.

They held up signs which read: “Khavaran is the enduring document of crime against humanity in Iran and the 1988 massacre.”

The families who visited Khavaran on April 23, 2021, reported that they saw eight freshly dug empty graves and two new graves marked by a sign indicating the name of the deceased.

The bereaved mothers of the 1988 massacre reiterated, “We will neither forgive, nor forget until the prosecution and accountability for the criminals.” They remain firm on bringing president Ebrahim Raisi to justice.

Prior to this in 2017, the graves of martyrs in Behesht-e Reza Cemetery in Mashhad and Vadi-e Rahmat in Tabriz were destroyed. In late July 2018, the regime destroyed the graves of the victims of the 1988 massacre in Ahvaz under the pretext of building a boulevard.

Some mass grave sites have even been turned into rubbish dumps.

“More than 33 years on, these crimes against humanity remain an open wound in Iran amid a crisis of systematic impunity. Those against whom there is evidence of direct involvement with these crimes continue to hold top positions of power. They include the current head of the judiciary and minister of justice, whose roles are vital for the pursuit of justice,” said Diana Eltahawy, Amnesty International’s Deputy Director for the Middle East and North Africa, in a statement on April 29, 2021.

Political prisoner Maryam Akbari Monfared wrote, that this fact cannot be hidden and that the martyrs will not be forgotten. The massacre of political prisoners continues by the oppression machine of Islamic rule.

Maryam’s sister and younger brother were executed in the summer of 1988, in the massacre of 30,000 political prisoners.

Stop talking to the regime in Iran

In the statement issued September 13, 2022, AI refers to UNHRC’s state members who, “have a moral obligation to stand with families, victims, and survivors of atrocities in Iran including the 1988 prison massacres and heed the calls of UN experts for the establishment of an international investigative mechanism.”

AI writes, “Members of the international community, including those involved in nuclear talks with Iran, must not shy away from speaking up for political gains. They should take concrete measures to tackle the ongoing crisis of systemic impunity in a country which has seen the rise to presidency of Ebrahim Raisi, who must be investigated for crimes against humanity.”

Not a single official has been brought to justice in Iran for the past and ongoing crimes against humanity linked to the 1988 “prison massacres”; and some of those involved hold or have held high positions of power in Iran. Iran’s current president and former head of the judiciary Ebrahim Raisi was a member of the “death commission” which carried out the enforced disappearance and extrajudicial execution of several thousand political dissidents in Evin and Gohardasht prisons near Tehran between late July and early September 1988.

Other members of the so-called “death commissions” who must be investigated for crimes against humanity include Alireza Avaei, who was the minister of justice from 2017 to 2021; Hossein Ali Nayyeri, who is the head of the Supreme Disciplinary Court for Judges; Mohammad Hossein Ahmadi, who is a current member of a key constitutional body; and Mostafa Pour Mohammadi, who was the minister of justice between 2013 and 2017 and is currently a senior advisor to the head of the judiciary.

Murder of Mahsa Amini, 22, by the mullahs’ repressive forces