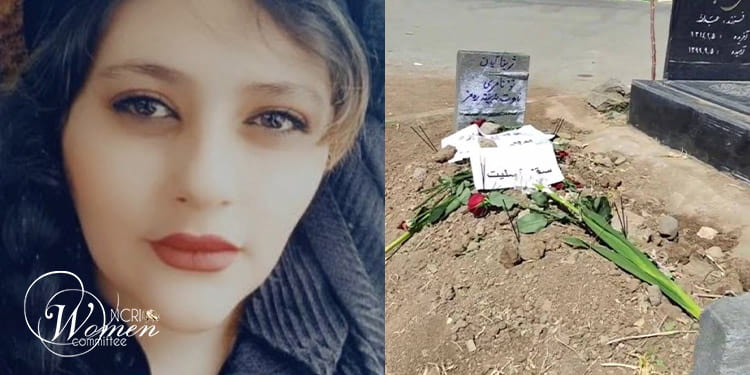 Wake up Zhina! People have come for you! – Mahsa Amini’s grieving mother

From the early hours of Saturday morning, September 17, 2022, throngs of the people of Saqqez gathered at the city’s main cemetery, Aichi, to attend the funeral of Mahsa Amini (Zhina).

The funeral turned into a massive protest against the regime, and its supreme leader, Ali Khamenei, despite the heavy presence of the Intelligence Ministry agents and the State Security Force. They had blocked the entrances of Saqqez to prevent people from participating in the funeral, with no success.

The angry women and people of Saqqez chanted, “Death to the dictator”, “Shame on Ali Khamenei”, “Death to Khamenei”, and “Regime of execution! Stop your crimes!”

Security forces had planned to bury Mahsa Amini overnight to prevent large crowds of people from attending her funeral. However, the Amini family insisted to conduct the burial and the funeral at 10 a.m. as promised to the people.

Mahsa Amini’s father attended the funeral in unstable conditions. Her grandfather and uncle were also there and vowed to pursue her case to the end.

Her mother kissed her grave and said, “Rise up Zhina! People have come for you!”

After the funeral, people marched to the Governor’s Office of Saqqez, where they were confronted by the State Security Force and the riot police. They chanted, “I will kill whoever killed my sister!” Security forces fired tear gas and pellets, wounding at least 5 protesters, one of them in critical condition.

Also, in Sanandaj, the capital of Kurdistan Province, people took to the streets, held extensive protests, and chanted anti-regime slogans. They hurled stones at the portraits of Khamenei and Qassem Soleimani and set fire to them.

The protests in Saqqez and Sanandaj followed angry protests in Tehran the night before near and around Kasra Hospital, where Mahsa Amini passed the last days and moments of her life.

Many people in Tehran honked their car horns to protest the mullahs’ crime. On the rooftops in Tehran, people chanted “Death to the dictator.”

Mrs. Maryam Rajavi, the President-elect of the National Council of Resistance of Iran (NCRI), offered her deepest sympathies to Mahsa Amini’s family yesterday and called for public mourning.

She urged Iranian women to hold nationwide protests against the mullahs’ misogynous and evil regime and called for the dismantling of the Guidance Patrol. “The resistant and resilient women of Iran will stand up to the tyranny and oppression of the mullahs and the IRGC and defeat them. Iranian people and women will fight back with all their might,” she added.

The young Kurdish woman, Mahsa Amini, was arrested on Tuesday evening, September 13, as she and her brother were exiting the Haqqani metro station.

Women who had also been arrested and were riding the same van as Mahsa Amini said that she had been beaten in the car. When they arrived at the Vozara detention center she was in poor condition but still conscious. The agents at the detention center, however, ignored her condition. The protest of other detainees demanding attention for Mahsa was met with violence.

The doctors and staff of Kasra Hospital said Mahsa Amini had no sign of life and was brain dead when she arrived in the hospital.

International reactions to the arbitrary arrest and death of Mahsa Amini

Reacting to the cold-blooded murder of Mahsa Amini, Amnesty International tweeted, “The circumstances leading to the suspicious death in custody of 22-year-old young woman Mahsa Amini, which include allegations of torture and other ill-treatment in custody, must be criminally investigated.

“The so-called morality police in Tehran arbitrarily arrested her 3 days before her death while enforcing the country’s abusive, degrading, and discriminatory forced veiling laws. All agents and officials responsible must face justice.”

On Friday, Professor Javaid Rehman, the UN Special Rapporteur on Human Rights Situation in Iran, expressed deep regret and sadness over the behavior of the regime with Mahsa Amini and added that this incident is a sign of widespread human rights violations in Iran.

Jake Sullivan, the White House National Security Advisor, tweeted, “We are deeply concerned by the death of 22-year-old Mahsa Amini, who was reportedly beaten in custody by Iran’s morality police. Her death is unforgivable. We will continue to hold Iranian officials accountable for such human right abuses.”