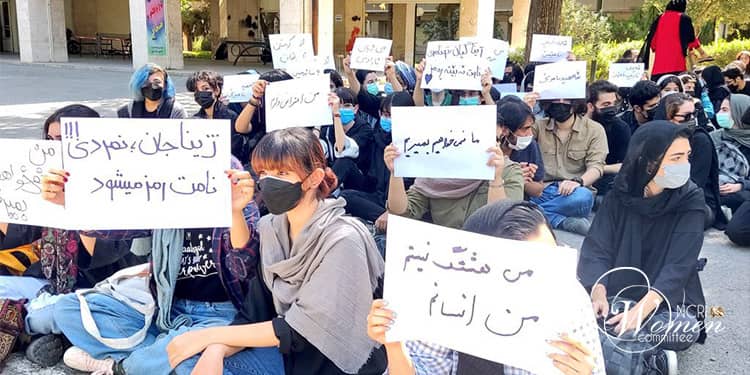 Women widely participate in protests in all cities

Students at Tehran University marched to protest the cold-hearted murder of Mahsa Amini by state agents of the so-called Guidance Patrol. Girl students widely participated in the frontline of the protest on the campus of Tehran University.

The protests against the murder of Mahsa Amini continued for the second day in Saqqez and Sanandaj with chants of “Death to Khamenei” and “Death to the dictator.”

People have also taken to the streets of Karaj, Gohardasht, and Mahabad with chants of “death to the dictator” after the murder of Mahsa Amini in Tehran by state security forces.

Security forces have opened fire on unarmed civilians in Sanandaj, and the confrontations continue as this report is published.

On Saturday, September 17, the people of Saqqez, Mahsa Amini’s hometown, started their protests in the early morning and continued until late at night.

The State Security Force blocked all the city’s entrances and exits. The forces riding motorcycles attacked the people of Saqqez. They were also equipped with anti-riot gears.

They opened fire on the people and used tear gas against them. Several protesters were arrested, and at least ten were wounded.

The widespread presence of brave women in these protests was remarkable.

Protesters hurled stones at Khamenei’s protests and set them on fire. They chanted “death to the dictator,” “martyrs never die,” and “I will kill the one who killed my sister.”

On Saturday evening, the people of Sanandaj took to the streets chanting, “Saqqez is not alone, Sanandaj is a supporter,” “Sanandaj is the supporter of Saqqez,” “Death to Khamenei,” “Death to the dictator,” “I will kill whoever killed my sister.” Security forces responded with tear gas and bullets.

The people of Sanandaj confronted the State Security Force by blocking the road, throwing stones, and tearing government banners and the picture of Qassem Soleimani.

Several demonstrators were injured, and a group of people was arrested. The uprising of the people of Sanandaj continued throughout the night despite severe repression.

The clerical regime blocked the internet in Saqqez and Sanandaj and disrupted it in some areas in a bid to prevent the spread of protests.

Mahsa Amini, the young Kurdish woman who was violently arrested on Tuesday, September 13, died this afternoon, at 3.40 p.m. Friday, September 16, 2022. Mahsa (Zhina) Amini, 22, from Saqqez, Iranian Kurdistan, had traveled to Tehran to visit her relatives in the capital.

Only two hours after the arrest, she went into a coma. She was taken to Kasra Hospital, where doctors said she had suffered a heart stroke and brain hemorrhage. The heavy blows to her head fractured her skull. She finally died this afternoon.

The Women’s Committee of the National Council of Resistance of Iran strongly condemns the murder of Mahsa Amini, 22, at the hands of the repressive forces of the misogynous clerical regime.

Mrs. Maryam Rajavi, the President-elect of the National Council of Resistance of Iran, extended her deepest sympathies to the family and parents of Mahsa (Zhina) Amini.

She called for public mourning for Mahsa (Zhina) Amini; an innocent young woman brutally murdered at the hands of the regime’s “Guidance Patrols.”

Mrs. Rajavi also reiterated that the Guidance Patrols must be disbanded.

She called on the courageous women of Iran to hold nationwide protests against the mullahs’ evil and misogynous regime.

“The resistant and resilient women of Iran will stand up to the tyranny and oppression of the mullahs and the IRGC and defeat them. Iranian people and women will fight back with all their might,” Mrs. Rajavi reiterated.