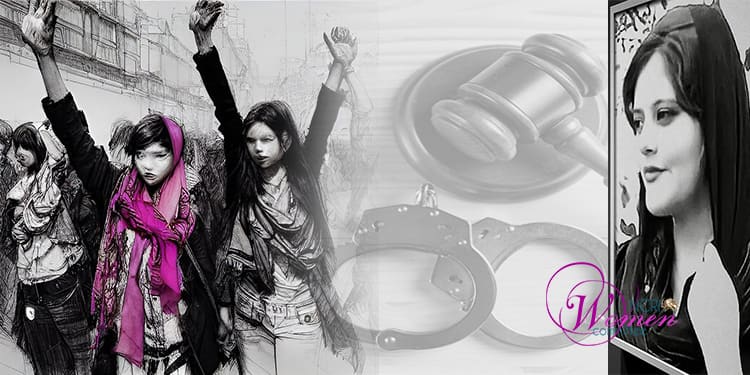 With the escalation of protests throughout Iran in the wake of Mahsa (Zhina) Amini’s murder by the Morality Police (Guidance Patrols) in Tehran, the state security forces have embarked on a wave of arbitrary arrests.

Faranak Rafii, an environmentalist and women’s rights activist, was arrested in Sanandaj on September 18, 2022, and taken to an unknown location.

On September 19, 2022, security forces in Sanandaj launched simultaneous raids on the residences of Mahrou Hedayati and Bahar Zangiband and arrested them.

Civil activist Baran Saedi from Sanandaj was arrested by security forces at her home on September 20, 2022, without providing any judicial warrant.

Azadeh Jamaati, another civil activist, was detained at the Intelligence Department of Sanandaj after being summoned. Security forces attacked Azadeh Jamaati’s home on September 19, 2022, in an attempt to arrest her, but she was not home.

Avin Rasti, a women’s rights activist, was arrested on September 20, 2022, for participating in protests over the death of Mahsa (Zhina) Amini in the city of Marivan.

Other reports indicate that Nazanin Jalil and Neda Mousavi in ​​Yasuj and Golareh Moradi in Paveh are also among the women captured over the past few days.

The fate and whereabouts of these female activists are yet unknown.

Special security forces of the mullahs’ parliament arrested Nazanin Hajizadeh, a writer and translator, in Tehran on September 18, 2022.

Nazanin Hajizadeh is 33 years old and resides in Tehran. She has been taken to an unknown place after protesting the death of Mahsa (Zhina) Amini outside of the parliament, i.e., Majlis. The gathering on September 18 turned violent, and several people were arrested.

Another writer in Tehran, Mahnaz Mohammadi, was arrested by security forces on September 18 for participating in the protests over Mahsa (Zhina) Amini’s murder. Mahnaz Mohammadi, a documentary movie director, is being held in an unknown place with numerous other women’s rights activists, according to informed sources.

Ms. Mohammadi has formerly been arrested and convicted.

Security forces in Mashhad arrested writer and sociologist Mansoureh Mousavi on September 20, 2022. She has been unheard of since. At the same time, the intelligence services ransacked Ms. Mousavi’s house. They confiscated her laptop along with some documents and manuscripts.

Mansoureh Mousavi, born in 1967, is a researcher and sociologist active in women’s studies. She has written books in this field. She helped translate the book “50 million women are changing the Islamic world.”

Sakineh Parvaneh, a political prisoner in the Vakilabad Central Prison of Mashhad, went on a two-day hunger strike on September 18, 2022. The reason, she said, was to express solidarity with the Iranian people’s nationwide uprising against the murder of Mahsa (Zhina) Amini.

As a Kurdish citizen, she wanted to give her full support to the uprising in Kurdistan.

Sakineh Parvaneh announced that she would also hold a memorial ceremony forMahsa (Zhina) Amini in the Central Prison Mashhad.

Sakineh Parvaneh was among the women interrogated and tortured in Qarchak and Evin prisons. She was detained in solitary confinement many times and sent to Aminabad Psychiatric Hospital in Shahr-e Rey to spend time among mentally-ill patients as a form of torture. She has spent time in Evin, Qarchak Varamin, Quchan, and Mashhad prisons.

Zeinab Hamrang, a retired teacher and a political prisoner in Evin, has been on medicine and hunger strike since September 14, 2022.

The 46-year-old imprisoned teacher has fluctuating blood pressure and kidney stones. The medicine and hunger strike has brought severe physical consequences for her.

Despite such conditions, six male and female guards brutalized and transferred her to the quarantine ward of Evin.

According to an informed source, the prison’s quarantine is a contaminated place where sick or new prisoners are usually kept and is devoid of the most basic facilities.”

Melika Gharagozlu, a journalism student at Tehran’s Allameh Tabatabai University, has been sentenced to 4 years and four months of jail time. Melika has also been fined and restricted from social activities. Previous reports about the student indicated her physical and psychological conditions to be poor.