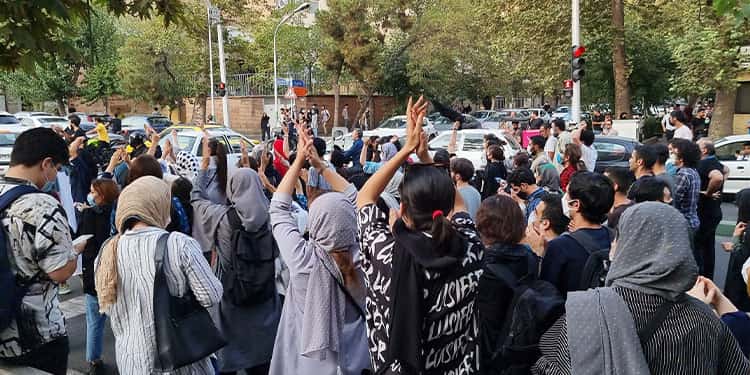 Following is a report published by Amnesty International on September 30, 2022:

Iran’s highest military body instructed the commanders of armed forces in all provinces to “severely confront” protesters who took to the streets following the death in custody of Mahsa Amini at the hands of Iran’s morality police, Amnesty International said today after obtaining leaked official documents which revealed the authorities’ plan to systematically crush the protests at any cost. The crackdown has left at least 52 identified victims dead and hundreds injured to date.

In a detailed analysis issued today, Amnesty International divulges evidence of the Iranian authorities’ plot to brutally crush the demonstrations by deploying the Revolutionary Guards, the Basij paramilitary force, the Law Enforcement Command of the Islamic Republic of Iran, riot police, and plainclothes security agents. The organization also shares evidence of the widespread use of lethal force and firearms by Iranian security forces who either intended to kill protesters or should have known with a reasonable degree of certainty that their use of firearms would result in deaths.

“The Iranian authorities knowingly decided to harm or kill people who took to the streets to express their anger at decades of repression and injustice. Amid an epidemic of systemic impunity that has long prevailed in Iran, dozens of men, women and children have been unlawfully killed in the latest round of bloodshed,” said Agnes Callamard, Amnesty International’s Secretary General.

“Without determined collective action by the international community, which needs to go beyond mere statements of condemnation, countless more face being killed, maimed, tortured, sexually assaulted or thrown behind bars solely for their participation in protests. Leaked documents obtained by Amnesty International bring into sharp focus the need for an international independent investigative and accountability mechanism.”

Based on eyewitness accounts and audio-visual evidence reviewed by Amnesty International, none of the 52 identified victims posed any imminent threat of death or serious injury that could warrant the use of firearms against them.

State denial and coverup after a week of unlawful killings

Amnesty International has obtained a leaked copy of an official document which states that, on 21 September 2022, the General Headquarters of Armed Forces issued an order to commanders in all provinces instructing them to “severely confront troublemakers and anti-revolutionaries”. Later that evening, the use of lethal force across the country escalated with dozens of men, women and children killed that night alone.

Another leaked document shows that, on 23 September, the commander of the armed forces in Mazandaran province ordered security forces in all towns and cities in the province to “confront mercilessly, going as far as causing deaths, any unrest by rioters and anti-Revolutionaries”.

Amnesty International has so far recorded the names of 52 people, including five women and at least five children, killed by Iran’s security forces between 19 September and 25 September. Two-thirds of the recorded deaths (at least 34) are from 21 September. The organization believes the real death toll is far higher and is continuing its efforts to identify victims.

In an attempt to absolve themselves of responsibility for the deaths, the Iranian authorities have shared false narratives about victims, attempting to portray them as “dangerous”, “violent individuals” or claiming that they had been killed by “rioters”. The authorities have been also intimidating and harassing victims’ families into silence or promising them financial compensation if they recorded videos attributing responsibility of their loved ones’ deaths to “rioters” working for “enemies” of the Islamic Republic of Iran.

Amnesty International has documented widespread patterns of torture and other ill-treatment by security forces, including severe beatings of protesters and bystanders. The organization has also documented sexual assault and other forms of gender-based and sexual violence, including cases where security forces grabbed women’s breasts or violently pulled their hair after they removed their headscarves in protest.

On 28 September, a protester from Esfahan told Amnesty International: “I have seen protesters beaten. The night before, my friends recounted how they saw one woman [protester] was yanked from her hair along the ground. Her clothes were coming off her body and the security forces kept pulling her by the hair…”

“Two nights ago”, the protester added, “several of my friends were beaten with batons. One of them, who has now got bruises on her forearm and legs, told me that security forces cornered them in an alley and beat them with batons. One member of the security forces then said, ‘let’s also shoot them in the leg’ and another security agent said, ‘no, let’s go’. They are so brutal”.

According to international human rights law and standards, even if some protesters engage in violence, law enforcement officials must ensure that those who remain peaceful can continue protesting without facing undue interference or intimidation by security forces. Any force used in response to such violence must at all times comply with the principles of legality, necessity and proportionality in accordance with international law. Security forces must not use firearms except to defend themselves or others against an imminent threat of death or serious injury, and only when less extreme and harmful means are insufficient to protect life.