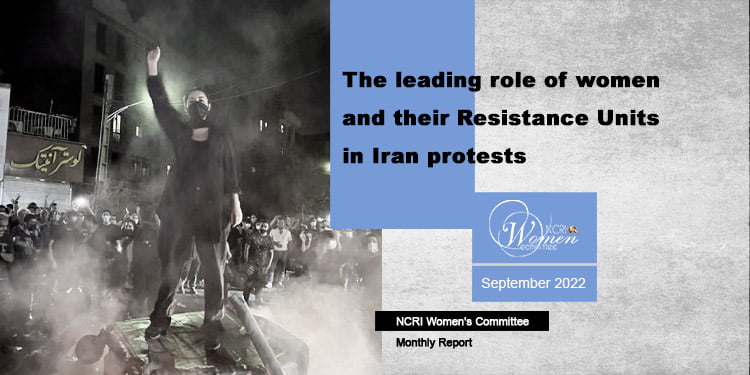 Women are the force for change, which the world witnessed and admired over the past three weeks during the Iran protests, calling for regime change in Iran.

Iranian women paid a heavy price with their children and lives to keep the flames of resistance alight for 44 years. They also paid a dear price for overhauling the relations within the movement to accept women’s political leadership in their long fight against a misogynous regime.

Now, the day has come for all Iranian women to show their power in the streets and lead the quest for regime change in Iran. The world watched and admired young women in hundreds of cities and dozens of universities running agile, inspiring, and leading the protests.

In addition to the universal chants of “Death to the dictator” and “Death to Khamenei” (the mullahs’ supreme leader), they cried out, “This is no longer a protest; it is a revolution!”

So, the protests sparked on September 16 by the death of an innocent young woman, Mahsa Amini, at the hands of the so-called “morality police” turned into a massive uprising spread across Iran in all cities, universities, and high schools. Women have the leading role everywhere.

Raisi and Khamenei have been outright stressing the maximum use of brute force to clamp down on protesters and stop the revolt at whatever cost. However, no amount of brutality has contained the pent-up anger of Iranian women and youths unleashed after 44 years.

On June 20, 1995, in a rally in London, the NCRI President-elect Maryam Rajavi addressed the mullahs and said, “You have used all possible forms of humiliation, oppression, repression, torture, and murder against Iranian women. But be sure you will receive the fatal blow from those you never count. Be sure that your oppressive rule will be swept away by Iran’s conscious and free women. Today’s oppressed (women) are the victors of tomorrow.”

Mahsa (Zhina) Amini, 22, from Saqqez, Iranian Kurdistan, had traveled to Tehran to visit her relatives in the capital.

She was violently arrested on September 13, 2022. Eyewitnesses said the state agents brutalized her in the State Security Force vehicle and the Moral Police station.

Only two hours after the arrest, she went into a coma. Doctors said she had suffered a heart stroke and brain hemorrhage. The heavy blows to her head fractured her skull. She finally died on September 16, 2022.

Mahsa’s cold-blooded murder at the hands of the morality police sparked public outrage in Iran and around the world.

The President-elect of the National Council of Resistance of Iran, Maryam Rajavi, called for a public mourning for Mahsa Amini. She also reiterated that the Guidance Patrols must be disbanded.

She called on the courageous women of Iran to hold nationwide protests against the mullahs’ misogynous regime.

“The resistant and resilient women of Iran will stand up to the tyranny and oppression of the mullahs and the IRGC and defeat them. Iranian people and women will fight back with all their might,” Mrs. Rajavi reiterated.

In universities and high schools, young women and girls rise for freedom

Young women were especially outspoken in the universities and high schools, denouncing the murders of Mahsa Amini and a dozen other young women by the regime’s security forces and calling for an end to the religious dictatorship.

On September 18, a Tehran University student protest followed angry protests in Kurdistan. Girl students widely participated in the frontline of the protest on the campus of Tehran University.

The following days, other universities in Tehran and other cities followed suit.

High school girls held anti-regime protests in dozens of schools across Iran. Some even took to the streets and chanted slogans against Ali Khamenei, the mullahs’ supreme leader. Others chanted, “This year, the regime is overthrown.”

In Shiraz, high school girls chanted, “Death to the dictator.”

Laying down her life for freedom

Tens of thousands of young women and girls of the opposition PMOI/MEK and other freedom-loving forces were executed by the clerical regime in the 1980s, for opposing the mullahs’ tyranny and oppression and refusing to renounce their beliefs in freedom and equality.

Again, during Iran protests in 2022, women are seen in large numbers at the forefront braving the security forces and standing up for their rights.

Of course, these brave women and the women of Resistance Units, do so at the cost of their lives and liberty.

Hajar Abbasi, 60, was the first woman killed when security forces in Mahabad, Kurdistan, shot her with pellet guns on September 19.

Aysan Madan Pasand died in Tabriz due to a beating by security forces on September 19.

An unknown woman was killed in Kerman on September 20.

Minoo Majidi, 62, the mother of three children, was shot in the head and killed by anti-riot forces in Kermanshah on September 20.

Hannaneh Kia, 23, was shot by security forces in Nowshahr on September 20.

Hadiss Najafi, 20, was shot six times in the chest and abdomen in Mehrshahr of Karaj on September 20.

Nika Shakarami, 17, was arrested during the Tehran protests on September 20. She was tortured for 10 days, and her lifeless body was handed over to her family on September 30.

Mahsa Mogouii, 16, was shot by security forces in Fuldshahr, Isfahan, on September 20.

Ghazaleh Chalavi, 33, was killed during protests in Amol on September 21.

Hediyeh Naimani, 25, was shot and wounded by security forces on Hafez Street in Nowshahr on September 22. She died in the hospital due to the severity of her injuries.

Sarina Esmailzadeh, 16, was caught by security forces during the protests in Karaj on September 23. She was viciously beaten on the head many times by batons, leading to her death.

The state-run Mehr News Agency published an interview on September 21, 2022, with IRGC Col. Heydari, commander of the Women’s Special Units of the State Security Force.

Heydari pointed out that for the first time, the SSF Special Units were deploying female forces to rein in the unrest. “For the first time, we witnessed the presence of women among the crowd of individuals who disrupt the public order and security. Some of these women are leaders. In addition to publicity, they chanted slogans that broke the norms. It was agreed that we deploy the women’s unit to arrest the women who disrupt the public order and security.”

Heydari added, “We have so far arrested eight female leaders.”

Those arrested are detained under inhuman conditions in Qarchak Prison or ward 209 of Evin Prison. Some 40 activists are detained in the Central Prison of Sanandaj.

The following women were among those arrested during Iran protests:

Maedeh Amir Siafi, student of the economy at Tehran University, September 30 in Tehran

Sara Naderi, student of the economy at Tehran University, September 30 in Tehran

Iranian women resolved to bring down the regime

But the Iranian regime’s clampdown will not work. The power of solidarity among the people is a thousand times more potent than repression and terror.

From Mahsa Amini to Minoo Majidi, Ghazaleh Chalavi, Hannaneh Kia, Nika Shakarami, and Sarina Esmailzadeh, who laid down their lives for freedom in recent days, and all of those who have been arrested for resisting for freedom, all of them are witnesses to the unwavering resolve of Iranian women and girls, and the courageous youths to bring down this misogynistic tyranny.

In their final leap to freedom, the brave women of Iran need the support of their sisters from around the world.