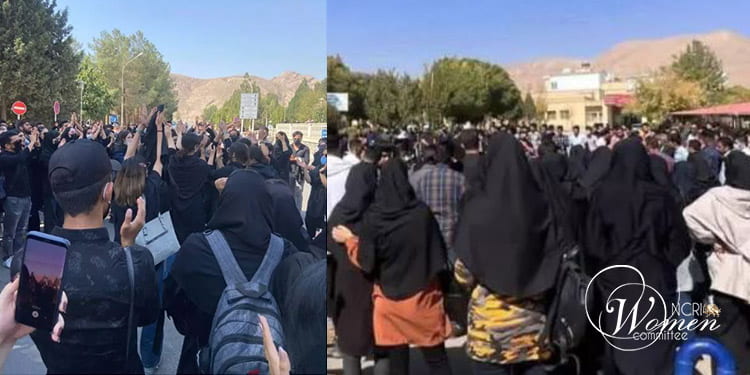 Iran protests continue on Day 32, despite vicious brutality against protesters and prisoners

The last resort efforts of a regime on its last leg

Iran protests marked the 32nd day on Monday, October 17, 2022. The clerical regime committed a horrific crime in the Evin Prison in Tehran against defenseless prisoners, including many political prisoners and the young protesters detained recently.

Ward 7 of Evin Prison where the detained protesters were held has burned down.

A 21-year-old protester, Hossein Jazzi, was among those killed in Evin. The regime has admitted that 60 prisoners have been wounded in the incident. Those wounded in the attack by special guards, have been abandoned despite heavy bleeding.

All indications are that the fire at Evin Prison on Saturday, October 15, was a premeditated plan on the part of the authorities to get rid of their opponents. The female political prisoners in the women’s ward of Evin are reportedly unharmed. Political prisoners say they do not have food, water, or gas.

Some political prisoners have been moved out from Evin and relocated to other prisons, but their numbers are not known. Prisoners calling from wards 4 and 8 say between 40-50 prisoners are missing from each ward.

However, the atrocity in Evin just fuelled more protests in cities across the country. More than 190 cities have seen anti-regime protests over the past month.

Dozens of universities held protests on Monday, comparing the fire in Evin to the incident in the Rex Movie Theatre in Abadan, where some 600 people were killed due to arson in the final months of the Shah’s reign.

More women among those slain

The names of more people killed during the Iran protests have been determined. The total number of the victims reaches 224, at least. Among them are more women. They include:

The clerical regime has been brutalizing women on the streets, even sexually assaulting them. The regime is trying in the way to terrify women and force them to back off from leading the protests.

They are doing the same thing to young men, making very violent arrests on the streets. The regime has also stationed tanks in some cities and used helicopters to confront the protests.

Such measures are only the last resort efforts of a regime on its last leg.

Asra Panahi, 15, lost her life when beaten by plainclothes agents