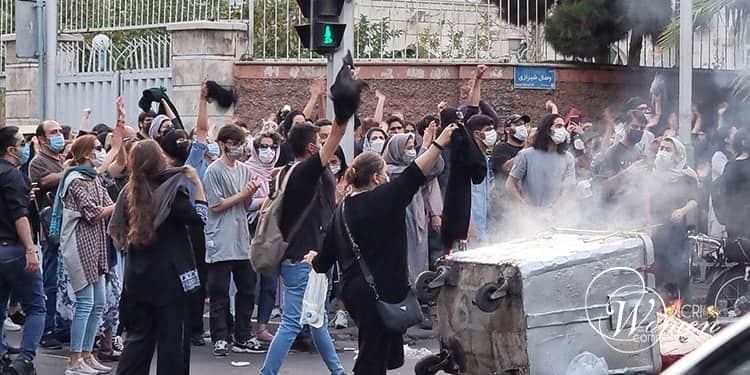 A member of the mullahs’ parliament, Ahmad Alireza Beigi, in an interview with the semi-official Asriran.com website, acknowledged that 3,000 protesters arrested during the protests in Tehran province are detained in the Greater Tehran Penitentiary. They include 360 women and 200 high school students.

Beigi said he and other members of the Councils and Internal Affairs Committee had visited the Greater Tehran Penitentiary (GTP), also known as Fashafuyeh Prison, on Tuesday, October 18.  He said: 3,000 of those arrested during the recent incidents in Tehran Province have been transferred to this prison.

Noting that they had not visited the women’s ward, Beigi said 360 women were among the detainees in Fashafuyeh. Another 200 are high school students and 200 are college students.

In another part of his interview, Beigi touching on the inhuman conditions of the jail, he revealed that some 1,300 prisoners from Evin Prison had been transferred to the GTP. “Naturally,” he said, “the addition of this number of inmates to the Fashafuyeh Prison is something that they did not expect and were not ready for. For this reason, they are not able to respond to the needs prisoners and there are shortages with regards to hygiene, nutrition, and access to telephones.”

Beigi admitted, “The conditions of inmates is unconventional.”

New names of women in the list of martyrs

The National Council of Resistance of Iran announced a new list of freedom-loving youths slain during the protests by the regime’s security forces.

Day 34 of the Iran uprising

Students at the Razi University in Kermanshah held a rally calling out the mullahs and blaming the paramilitary IRGC Bassij for having blood on their hands yet praying to God!

And the students at the Medical Sciences University in Zahedan chanted, “From Zahedan to Tehran, I give my life for my country, Iran!”

In Bukan and Sanandaj, high school students marched in the streets and chanted, “Death to the dictator!” and “We will fight and take back Iran.”

Youths in Mashhad and Babolsar widely wrote graffiti on the walls.

Shop owners in Divandarreh, Bukan, and Mahabad in Kurdistan continued their strike in solidarity with the uprising.

Young people also continued their protests in various districts of Tehran including the Shariati Ave., Zafar, Narmak, and Tehranpars districts with chants of “Death to the dictator.” In Ekbatan district, young people held a rally and engaged in hit and run battles with the suppressive forces.

Iran: The clerical regime's killing of children, students is a clear violation of international laws and treaties