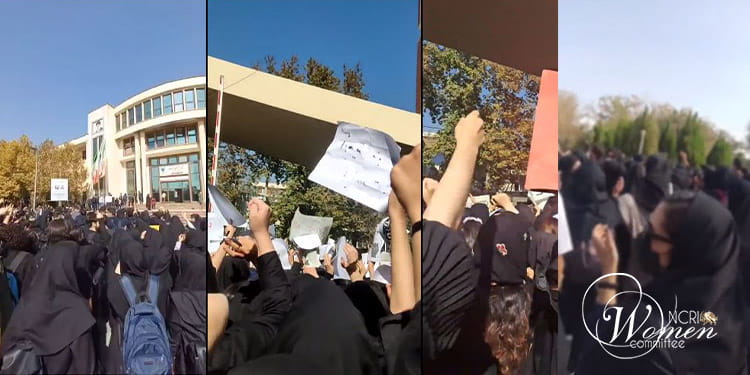 Student protests on Day 41, from left, Azad University in Tehran, Az-Zahra University, and the University of Arak

On the 40th day after the death of Mahsa Amini, Iranians marched and held protests in a show of solidarity across the country

Voices of women were loud and clear on Day 41 of Iran uprising.

Protests and strikes began in the morning of October 26, 2022, in Tehran and various parts of Iran.

Voices of women were loud and clear on Day 41 of the Iran uprising as they chanted the slogan of the day, “Death to the oppressor, be it the shah or the (mullahs’ supreme) leader.”

Until 5 p.m. at least 58 universities, 30 Tehran districts, and 19 cities saw anti-regime protests and clashes with security forces. Bazaar merchants held strikes in 31 cities. Workers in Abadan and Tehran oil refineries and Kerman’s Steel went on strike and high school students joined the protests in many cities.

A huge crowd gathered in Aichi Cemetery in Saqqez, to commemorate Mahsa Amini on the 40th day after her death. Tens of thousands of people paved the path on foot toward the cemetery since the security forces had blocked all roads and routes to prevent people from gathering at Mahsa Amini’s grave.

The huge crowd chanted, “Death to the dictator,” “Death to Khamenei,” “We are all Mahsa, fight and we will fight back,” “From Kurdistan to Tehran, I sacrifice my life for Iran,” etc.

Protests continued in Saqqez throughout the day.

Some student demonstrations in Tehran flowed into the streets of the capital e.g. on Kargar street. The security forces opened fire on the students with pellet guns.