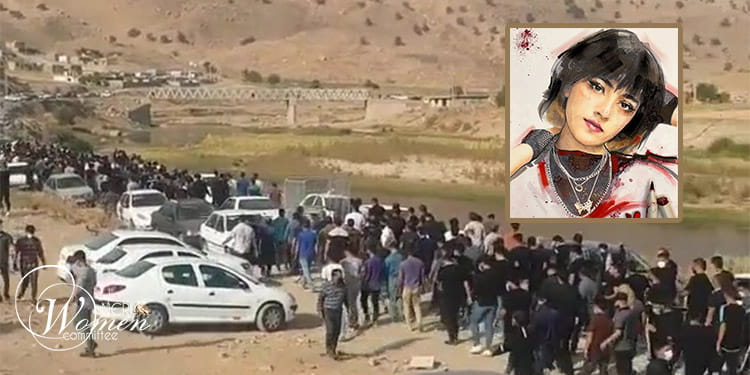 Mourners walking to the village where Nika rests in peace

‘All of us are Nika, fight and we’ll fight back,’ chanted protesters

12 women foreign ministers express solidarity with the women of Iran

On Thursday, October 27, the people of Khorramabad gathered to pay tribute to Nika Shakarami with anti-regime slogans. They vowed to take her revenge and topple the regime.

Security forces had blocked the bridge in Veysian, which is the only route to Hayat-ol Ghaib village where Nika is buried. However, the people and youths fought back, pushed back the regime’s forces, and made it to the cemetery.

At the cemetery, Nika Shakarami’s mother expressed her grief over the loss of her brilliant and lively daughter who was supposed to have a bright future. But she said she was proud that her martyrdom had turned into a driving force for the rising of the country’s youths.

The crowd also sang the traditional song of Lorestan, Dayah dayah vaght-e jangah (O’ motherland! It’s time to fight!), attesting to the truth the names of Mahsa, Nika, Hadiss, Sarina, and all the young women who were killed in cold blood by the regime’s security forces have now turned into a code and a driving force for freedom-loving youths to rise up and fight.

Khorramabad, the hometown of Nika Shakarami, is the capital of Lorestan Province in western Iran.

Nika Shakarami is one of the young women, only 17 years old, to be abducted in the early days of the Iran uprising on September 20, tortured, and killed by the Iranian regime’s security forces.

Nika’s body was handed over to the family, 10 days later, on September 30. They were allowed to see only her face with a smashed nose.

Tehran’s municipality initially indicated that Nika Shakarami had died because of heavy blows dealt to her head. But the state TV broadcast a forged video claiming that she had thrown herself from a building and committed suicide. The intelligence services also extracted false confessions from her aunt and uncle against their will.

The regime snatched Nika’s body from her family on the night of burial and buried her in the distant village of Hayat-ol Ghaib.

New names of women among 280 slain in Iran uprising

The National Council of Resistance of Iran announced 20 new names of protesters killed at the hands of security forces during the Iran uprising.

The list includes the names of the following women some of them killed today and last night:

Thursday, October 27, day 42 of the Iran uprising also saw a massive protest in Mahabad, West Azerbaijan Province, in the wake of the murder last night of a young man, Esmael Moloudi, by the IRGC guards.

The IRGC forces attempted to snatch away Esmael’s body and secretly bury him, but his family resisted and held a massive funeral for him, in the morning.

On the 42nd day of the Iran uprising, protesters including freedom-loving doctors, staged protests in Tehran, Karaj, Tabriz, Isfahan, Borujen, and Shiraz calling for the overthrow of the clerical regime.

The day before, Wednesday, October 26, on the 40th day of martyrdom of Mahsa Amini, throngs of people attended at her gravesite in Saqqez despite heightened security measures.

Anger flared at her funeral last month and quickly sparked the biggest wave of protests to rock the Iranian regime in almost three years, wrote the Associated Press.

The women foreign ministers expressed “solidarity with the courageous Iranian women engaging in their right of peaceful assembly and advocating for their human rights.”

They also condemned the “violent enforcement” of Iran’s hijab and chastity law and the “ongoing crackdown against protesters,” including women and students.

Professor Javaid Rehman, the UN Special Rapporteur on the situation of human rights in Iran, addressed the Third Committee session at the United Nations deliberating a resolution censuring the Iranian regime for gross violations of human rights.

In his remarks to the Third Committee, Prof. Javaid Rehman said the Iranian authorities responded with brutal oppression to protests that started five weeks ago, and that at least 215 people had died, and thousands of people arrested, including human rights defenders, students, lawyers and journalists.

He expressed alarm over the conditions of women and called for the establishment of an international investigation into Iran’s human rights abuses leading up to and following the death of Mahsa Amini, which triggered a wave of popular protests.

In the absence of any domestic accountability channels, Dr. Rehman stressed that the international community has a responsibility to take action and address impunity for human rights abuses perpetrated in the country.