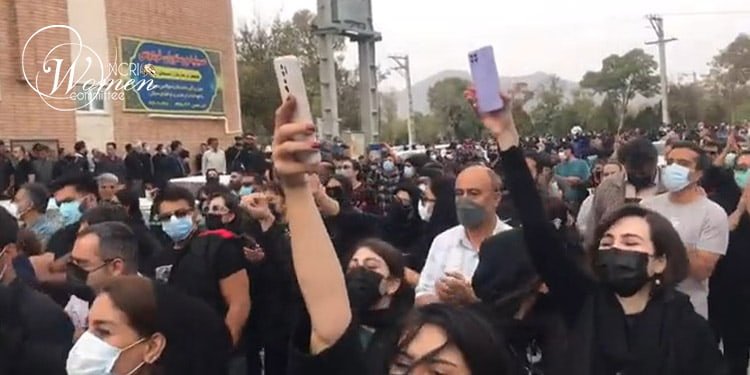 Protesters in Arak on November 3

Iran uprising forges ahead despite massive crackdown and spree of arrests

Karaj, west of Tehran, was a hotbed of protests. Thousands of youths walked to Behesht-e Sakineh cemetery where Hadis Najafi, Sarina Esmailzadeh, Ruzbeh Khademian and Reza Parsadoust are resting in peace.

Security forces had blocked the highway and the old Karaj Road leading to Behesht-e Sakineh, but people marched to the cemetery despite successive use of tear gas against them.

Chanting anti-regime slogans, angry protesters clashed with security forces, overcoming their force. They forced the repressive forces to flee and set their kiosks and cars on fire.

In Fuladshahr, Isfahan, thousands of Iranians gathered and commemorated Mahsa Mogoui, 19, killed by the Iranian regime’s security forces on September 22. They chanted, “Death to Khamenei,” “I will kill those who killed my sister” and “This is the year of (Khamenei’s) overthrow!”

Security forces fired tear gas at the crowd and clashes broke out between protesters and riot forces. Security forces shot a middle-aged woman in the head and killed her.

In Amol, Mazandaran (northern Iran), thousands of Iranians marched in the streets and commemorated the 40th day of Ghazaleh Chalavi.

The people of Mahabad and her family also gathered on the 7th day of martyrdom of Fereshteh Ahmadi and paid tribute to her.

More protests on Day 48 throughout Iran

The people of Tehran held nightly protests in Chitgar, Amirabad, Tehranpars, S. Jannatabad, Salsabil and in several metro stations with chants of “Death to the dictator” and “We will fight and die to take back Iran,” among others.

Thousands of Iranians gathered in a cemetery in Noshahr to commemorate the 40th day of martyrdom of Hannaneh Kia.

Iran uprising is forging ahead with widespread and massive protests despite the clerical regime’s brutal crackdown on protesters, activists, and their lawyers.

Three female lawyers have been arrested in Shiraz and detained by security forces in recent days.

Asetareh (Maryam) Ansari, a lawyer in Shiraz, was arrested by security forces on Wednesday, November 2, 2022, and transferred to an unknown location. Her arrest took place as she was leaving the Bar Association of Shiraz.‎ It is not clear why and on what charges Ms. Ansari has been arrested.

‎Nazanin Salari and Bahar Sahrayian were also ‎‎arrested in Shiraz ‎‎on November 1, 2022. Ms. Salari is the head of the Human Rights Commission at the Fars District’s Bar Association. She was detained at her office. These lawyers accepted free representation of students and activists in Fars Province.

Negar Azimi, a 24-year-old digital painter and a streamer, was arrested on October 26, 2022, in Tehran. Negar has lost both her parents and lived with her relatives. There is no word on her condition. However much her relatives have tried to send her medications, the authorities tell them that only her father is allowed to intervene.

Ghazal Masoum Shahi was arrested at her husband’s office in Tehran on November 1, 2022. She is a master’s student at the prestigious Amir Kabir University.

‎Heliya Barkhi, 18 years old from Islamabad-e Gharb, was abducted by security forces in Pakdasht, Tehran Province, in late September. She was transferred to Qarchak Prison in Varamin.

Banafsheh Kamali, a poetess in Yazd, was arrested on September 24 without any clear reasons. The authorities remain silent on her case.

Sanaz Jahan Tigh went on strike on Monday, October 31, 2022, to protest the continuation of her detention in Qaemshahr Prison without standing trial. Sanaz was arrested by security forces some 40 days ago during the nationwide protests.

‎Mina Qalandari was arrested in Mashhad on Thursday, October 27, 2022, at her home by intelligence agents.

‎Zoha Abdi, a pharmacy student at Isfahan University of Medical Sciences was arrested and taken to an unknown location. ‎An informed source said that Zoha Abdi had been arrested by plainclothes agents at the pharmacy of Khanevadeh Hospital in Isfahan on Wednesday, October 26, 2022, for helping a student protester who was injured during the protests.

‎Behjat Mardani and Maryam Abbasi, both residents of Behbahan, were arrested by security forces and transferred to an unknown location on ‎October 26‎, 2022.

A source close to Ms.‎‎ Mardani explained that she ‎‎is a nurse and mother of two children. She has donated one of her kidneys and is currently unable to endure imprisonment due to her physical condition.‎

Yalda Aghafazli, 19, was arrested in Tehran on October 26, 2022, and transferred to Qarchak Prison in Varamin. She has been on strike since her arrest.

Nasibeh Nami, an Iranian poetess, was arrested October 20, 2022. She had sent up a balloon with a protest slogan written on it. For this, she was flogged on the soles of her feet with cables such that she is unable to walk properly. She has been taken to Yasuj Prison without her family being informed of her conditions.

Maryam Derisi, a graduate student at Saveh University, was arrested by security forces in Shiraz on October 15, 2022. She was recently transferred from the Intelligence Department’s detention center to Adel Abad Prison in Shiraz.‎