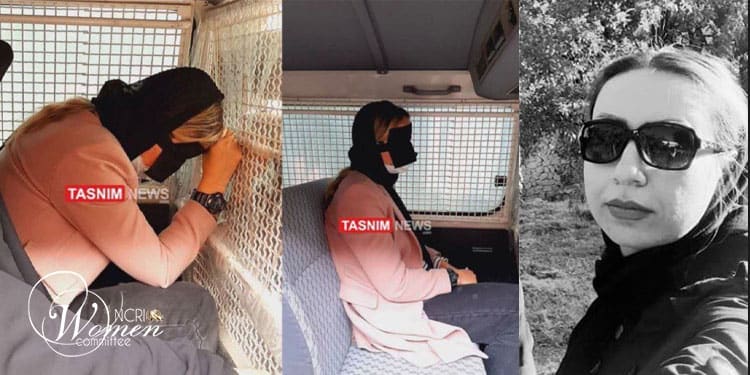 Elham Afkari was arrested - Left, the photos published by the state-run media in Iran

Elham Afkari is the sister of Iran’s slain hero, Navid Afkari who was hanged in September 2020 for participating in a protest in Kazerun.

Her husband and three-year-old daughter, Liana, were also taken into custody, but released two hours later, as announced by the Prosecutor of Shiraz.

Elham’s parents went to the Intelligence Department to inquire about Elham’s condition, but they did not open the door.

The state-run media have falsely reported that they arrested Elham Afkari as she was crossing the border. They accuse her of working for a Farsi language TV abroad.

The clerical regime has been cracking down on activists during 56 days of Iran uprising with 550 protesters killed and more than 30,000 arrested.

Elham Afkari was outspoken in seeking justice for her slain brother, and another brother who is still in solitary confinement in jail.

Elham Afkari is reportedly detained in No. 100, the notorious detention center of the Intelligence Department of Shiraz.

The Afkari family have been constantly under pressure and harassed by the Intelligence department of Shiraz.

Navid Afkari, a wrestling champion, was hanged on September 12, 2020, in Adelabad Prison of Shiraz, despite international outcries.

He was arrested on September 17, 2018, and falsely accused of killing a Bassij agent during a protest in Shiraz in August 2018.

Navid Afkari had filed a complaint with the Judiciary on September 13, 2019, detailing how he was forced to give false confessions while subjected to “the most severe physical and psychological torture” during 50 days of detention.

In an open letter, he wrote, “They put a plastic bag over my head and almost suffocated me. Using batons and other hard objects, they beat hard on my hands, abdomen, and legs. They used foul language and insulted me frequently. They tied me tight and poured alcohol down my nostrils.”