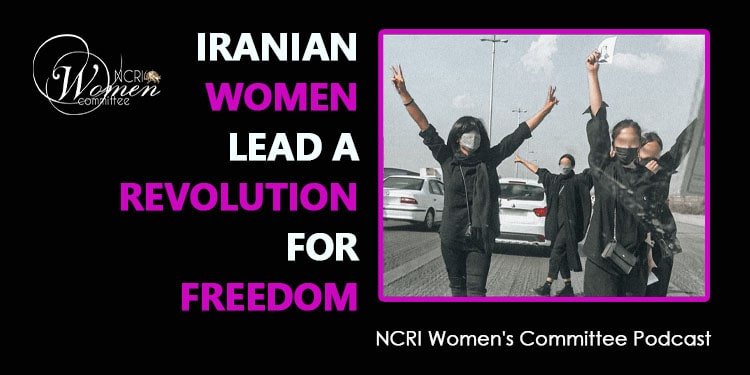 In today’s episode, as the people in Iran are taking to the streets on the anniversary of the November 2019, we will focus on the goals and desires of the courageous women of Iran and the role they play in what’s indeed a Revolution.

The answer to this question is very simple. The goal of these protests and this revolution can be summarized in one word, “freedom.” Something that the people of Iran and especially Iranian women, are deprived of.

Indeed, the goal of the previous revolution in 1979 was also freedom, but Khomeini hijacked the leadership of that revolution and diverted its goal.

Actually, our people in Iran have a long history of over 120 years of struggle for freedom. And it seems that we’re finally getting there.

The Iranian people rose up many times over the past years under the mullahs. In 1999, in 2009, in 2017, 2018, and 2019. Every time these upheavals were suppressed with massive crackdowns and utmost brutality.

This time, however, the organized network of Resistance Units is at work with a new generation that’s incredibly brave, enlightened, and determined. As they chant in all their acts of protest, they want “freedom, freedom, freedom!”

Women are leading a revolution for freedom

Of course, women are leading the revolution in Iran. The world are seeing that truth with their own eyes. But this did not come about overnight.

Women have been leading the Iranian opposition for some 40 years. They have endured inconceivable torture, and laid down their lives to bring freedom to their nation. They’ve been through numerous tests and tribulations.

And there is an obvious reason for that. Because the ruling regime in Iran is a misogynous one. I’m sure everyone remembers or at least knows that soon after the 1979 revolution, that is less than one month, Khomeini announced that women who worked at government offices must cover their hair and those who didn’t were expelled from their jobs.

The mullahs are inherently misogynous and they have always relied on suppression of women to impose their dictates on the society in general.

So you can see that women were the first victims of the regime’s repression, who were deprived of their rights and freedoms one after the other.

And it’s all but natural that women lead the protests in Iran. They’ve been the most oppressed under the mullahs, deprived of all their human rights and degraded to second class citizens.

However, as I mentioned earlier, this is not a women’s revolution or a feminist revolution, concerning only women’s rights and their right to remove their veil. The goal is freedom for everyone, for all the nation, women and men, and in all areas of life.

And that’s why the movement is so extensive, nationwide, and involves people from all walks of life.

The spark to a powder keg

And I must emphasize that this was not the only case where women died because of the state security forces’ brutality. The difference was that a journalist followed up on this case and reported it, for which she is in jail right now.

So Mahsa Amini’s death was widely reported and people found out about it on a vast scale.

Imagine you have a powder keg of a deeply disgruntled public who’re fed up with the regime’s oppression over the years in every sense. All they needed was a spark to explode.

Now, the protests started with the unfortunate death of Mahsa Amini but they did not die down after the regime’s crackdown.

As I mentioned earlier, the key point was that this time there are thousands of Resistance Units in Iran to start the protests and keep them going. And they continue to do so at a high cost of getting arrested, imprisoned, tortured, and executed.

They know the cost, but they also know that this is the price of freedom.

As we in the NCRI Women’s Committee have stressed for years, the enforcement of the mandatory Hijab is a state-sponsored and the most common form of violence against women in Iran. By common, I mean that women from all ages and all walks of life are subjected to this violence throughout the country.

In September 2016, the Commander of the State Security Force admitted that they arrest 2,000 women every day for failing to observe the regime’s dress code.

But this is a figure from six years ago. When Raisi took office, he stepped up the efforts to impose the compulsory veil, restricting women from entering hospitals, shopping malls, government offices, metro stations, etc. and depriving them of public services.

Brutal crackdown on women on the streets was also the main part of such intensified efforts. And you can imagine what the numbers are today.

Even those people, who cover their hair out of their religious belief and not by force, also oppose the regime’s coercion in this regard. Because this is not Islam and this is sheer dictatorship. It is a pretext under which, the regime has restricted all other social and individual freedoms in Iran since 1979.

Let me add here, that a parliamentary research in 2018 revealed that more than 70% of Iranian women oppose the mandatory Hijab. This is a paper done by the research committee of the mullahs’ parliament.

This is the most common grievance among all Iranian women and of course, their families, that make up all the Iranian population.

But women’s freedom of choice regarding their attire is just one out of hundreds of other freedoms the Iranian people are deprived of. And that’s the subject and the goal of this ongoing revolution. That’s why people from all walks of life are involved in this uprising.

From teachers, professors, doctors, nurses, business and shop owners, and farmers to university and high school students who spearhead the protests. Everyone is opposed to this regime, because they know that their basic rights and even minimum economic rights could not be realized unless the clerical regime is overthrown and there is a regime change and a democratic republic in Iran.

You’re right. As I mentioned even those who wear the scarf or Hijab, they oppose the regime’s compulsory veiling policy. These days university students chant, “With or without Hijab, let’s all go for a revolution.”

In other words, true democracy is to let women choose on their own, not to dictate to them what to wear as the Shah’s father removed women’s Hijab by force, or the mullahs who made it mandatory for everyone, even women of other faiths. This is an outright gender discrimination. Does anyone dictate to men what to wear? No. The same must be true for women.

In the future democratic Iran, we want a democratically elected republic, based on gender equality, separation of religion and state, and autonomy of ethnic groups. This is the desire of all the people of Iran and women are leading the way.

The people of Iran need the solidarity and support of all people from around the world.

Most of all, they need all governments’ official recognition of the Iranian people’s right to overthrow the clerical regime and the young people’s right to fight the IRGC, the Revolutionary Guards who are the main force of oppression in Iran. Everyone can help in this cause by asking their governments to recognize those rights and to severe relations with the current Iranian regime.

On Day 61, Iran women lead protests on the anniversary of Nov 2019 uprising