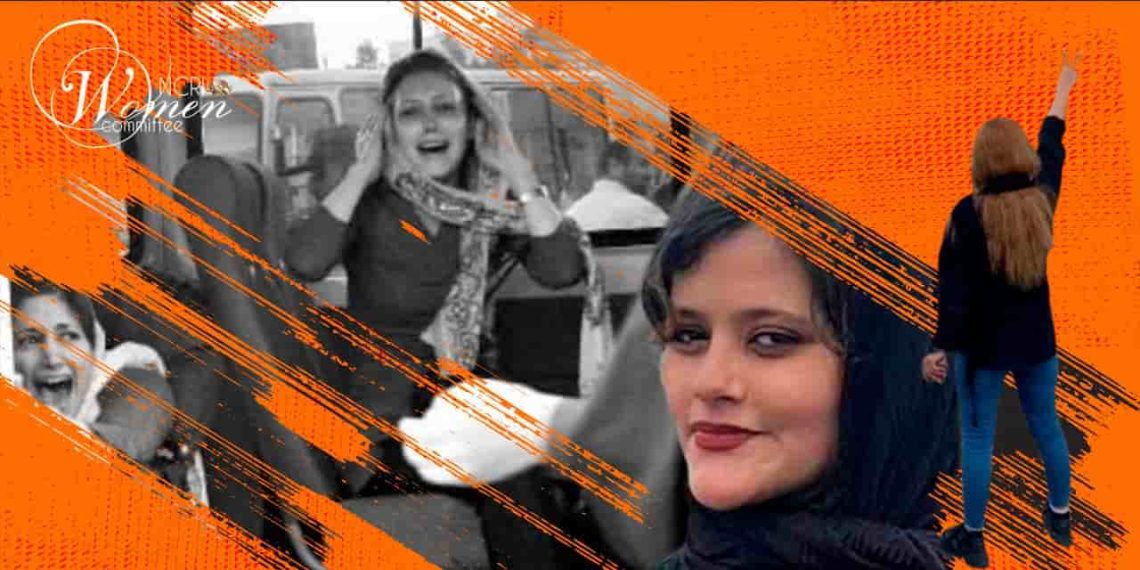 Women arrested by Morality Police, Mahsa was in a similar situation

Violence against Iranian women to enforce the compulsory Hijab on them has been a pillar of the mullahs’ rule since the outset. By doing so, they had enchained the entire society, quashing all opposition and protests.

The inhuman policy, however, finally backfired this September after Mahsa Amini died in the custody of Morality Police. Today, Iran is on the brink of change, and women are leading a revolution for freedom and equality for themselves and the nation.

On the eve of International Day for the Elimination of Violence Against Women, we glance over what has happened to women in Iran over the past year since November 25, 2021.

A growing tide of honor killings and femicides

The clerical regime is the world record holder in domestic violence against women and the world’s top executioner of women.

Iranian women’s life was studded with rising brutality since November 25, 2021.

In addition to child marriages, which were already rampant in Iran, the country saw a rising tide of honor killings and femicides. The horrific murder of Mona Heydari on February 5, 2022, caught international attention to the injustice and violence against Iranian women.

It also drew attention to the fact that Iran’s catastrophic rise in honor killings is rooted in misogyny and the patriarchal culture institutionalized in the laws and, consequently, in society. Although the father, brother, or husband holds the knife, sickle, or rifle, the murders are rooted in the clerical regime’s medieval laws that denote women as second-class citizens owned by men.

You can check out the honor killings tag on our website to review this issue.

The state-sponsored, most common form of violence against Iranian women

For years on the International Day for the Elimination of Violence Against Women, we have talked about the state-sponsored, most common form of violence against Iranian women, i.e., the enforcement of the mandatory Hijab.

Here are a few out of hundreds of articles we have published over the past few years:

The drastic rise in violence against women in Iran

Ramping up repressive efforts to enforce the mandatory Hijab

This year, however, thanks to the public uproar and protests that followed the arbitrary murder of Mahsa Amini by vice patrols, the world is getting a sense of the state-sponsored violence against Iranian women and what it really means.

In addition to the spree of executions, the main hallmark of Raisi’s presidency was the suppression of women.

On July 5, 2022, Raisi ordered the re-implementation of a plan adopted in 2005 to enforce the compulsory veil. The clampdown on women thus took an unprecedented height in early July, affecting all areas of women’s life.

On July 27, Ali Khamenei held a meeting with Friday prayer leaders. He said women should wear the head-to-toe chador (veil) in all scientific, social, political, administrative, economic, and cultural arenas.

The number of visible and invisible (plainclothes) vice patrols also increased with the establishment of military bases. Troops were granted permission to “fire at will” to impose the compulsory Hijab.

The regime announced punishments for employers, hospital directors, office managers, and business owners if their female employees did not observe the official mandatory dress code. Their shops would be closed, and they would be expelled from their jobs.

The semi-official Hamshahri newspaper wrote that at least 15 million and at most 20 million women should receive verbal warnings. These figures mean that the regime’s so-called guidance patrols target 60 to 80 percent of women in the cities. (The state-run eghtesadnews.com, July 27, 2022)

One of the incidents, emblematic of social defiance of the mandatory Hijab rules, was a gathering of teenage boys and girls in Shiraz, where the girls had removed their head coverings. The authorities arrested ten teenagers and vowed to take “judicial action.” (The state-run Mashregh News – June 23, 2022).

In the final days of July, the vice patrols in Tehran committed an inhuman act that outraged Iranian society. They took away a young woman whose mother said she was sick. As the mother tried to prevent the van from moving, she sobbed and said, “My daughter is ill!” She tried to stop the van by standing in front of it.

Later, it was revealed that the young woman had died after being released from the Morality Police’s detention center.

Sepideh Rashno, 28, an artist, writer, and editor, was also arrested on July 18 for removing her Hijab on a Rapid Transit Bus. She was transferred to solitary confinement in Evin Prison and interrogated without having access to a lawyer or contacting her family. Sepideh was reportedly taken to a Tehran hospital on July 21 due to internal bleeding. Witnesses saw her trembling and unable to walk.

The Iranian state television aired Rashno’s “confession” on July 31. She appeared to be in a poor physical state, and bruises were evident around her eyes. The obvious conclusion was that she had been tortured to make false televised confessions.

The above examples are a few out of hundreds that preceded Mahsa Amini’s arrest and death. As young women defied the patrol’s warnings, the patrols became increasingly brutal in dealing with the young women and girls who stood up to them and did not accept being humiliated.

On September 13, 2022, vice patrols stopped Mahsa Amini and her brother on the street in Tehran.

Mahsa resisted the Morality Police warning and did not cooperate. The patrols called their boss, and they pushed her into a van by brute force.

Some say the police chief slapped her so strong that she fell to the ground and her head hit the curbstone. Others say she was brutalized in the van by repeated blows of batons to her head.

Two hours later, she was in a coma and taken to Kasra Hospital. The CT scans later exposed by the hospital staff showed that her skull had fractured and she had suffered a brain hemorrhage.

Tragically, Mahsa died on September 16, 2022. However, her name became a code for Iranian women and youths to call for overthrowing the misogynistic regime.

The women who resist the mullahs’ repressive regime and lead the protests on the streets of Iran face even greater brutality. Dozens of young women have been killed by the blows of batons during the demonstrations. This issue will be the subject of one of our future articles in the days of activism to eliminate violence against women.

Stand by Iranian women by supporting their struggle

Meanwhile, you can support Iranian women in their fight for equal rights and freedoms by supporting the revolution they lead in Iran.

Stand by the Iranian people by calling on your government to remove the Iranian regime from the UN Commission on the Status of Women (CSW). Such a misogynous regime that kills women and children does not deserve to sit in the CSW.

Also, urge your governments to push for an independent fact-finding mission to travel to Iran.

Urge your government to compel the Iranian regime, through all possible means, to release the imprisoned protesters, especially the young women and girls, and drop the charges against them.