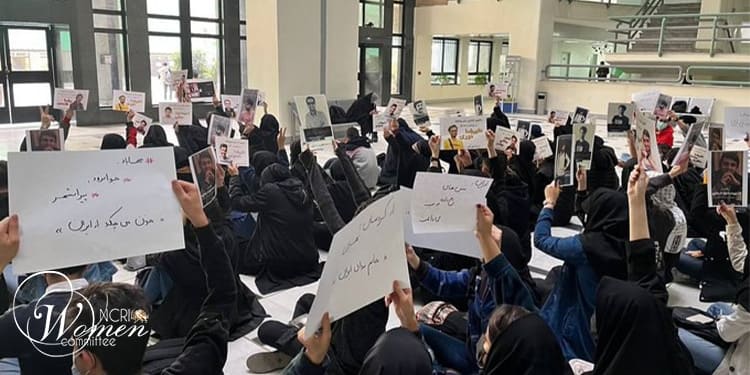 21 years for 5 protesters, a lawyer, and a student activist arrested

The Iranian people’s uprising continued Sunday, November 27, 2022, for the 73rd day with expressions of solidarity with Kurdistan and Zahedan. Young women and girls were at the forefront of all university protests, nightly protests in the streets and everywhere.

High school girls in Sanandaj also held a memorial ceremony for those killed during the uprising by security forces.

Expressions of solidarity with Kurdistan and Zahedan

On November 26, the protests were loaded with expressions of solidarity with Kurdistan and Zahedan.

The clerical regime attacked Kurdish cities on November 21 and the following days. The people of these cities put up a courageous resistance, but many were killed and wounded, and others were arrested.

In Golshahr, Karaj, protesters, including many women, were chanting, “From Kurdistan to Tehran, my life for Iran!” “Zahedan, Kurdistan, the pride of Iran!”

Protesters in the Fardis district of Karaj chanted, “Mahabad, Kurdistan! My life for Iran!”

Students at various universities boycotted their classes on the uprising’s 72nd day, including Amir Kabir, Sharif, and Melli universities. The students at Tehran University chanted, “We’re the students of Tehran and the voice of Kurdistan.”

Students at the Isfahan University of Technology also boycotted their classes and held a big march on campus.

On Friday, November 25, 2022, women also marched in the streets of Zahedan, chanting, “Death to the dictator,” “Khamenei, shame on you, let go of the country!”

Security forces, many dressed in local Baluchi garbs, opened fire on protesters in Zahedan and Khash. They arrested many youths. They even stopped the ambulances and took away the wounded protesters.

They also arrested many protesters in Khash. They attacked and surrounded the Al-Khalil Mosque, arresting anyone who walked out.

Families of detained protesters gathered outside the regime’s notorious Evin Prison on November 27, demanding answers about their loved ones’ conditions and whereabouts.

Families of recently arrested protesters gathered outside the Judiciary of Abdanan on November 26, demanding the unconditional release of their loved ones. Abdanan is a city in the south of Ilam Province, western Iran.

4,000 workers at the Steel Mill of Isfahan, the workers of home appliances manufacturer in the Alborz Industrial Complex in Alvand, Qazvin, went on strike.

The third branch of the Revolutionary Court of Urmia handed down 21 years of jail time for five protesters, including four young women, arrested in Urmia, the capital of West Azerbaijan Province.

The protesters were accused of “propaganda against the state,” and “assembly and collusion to disrupt national security.”

Najafzadeh, the judge presiding over the case, informed them of their sentences verbally.

Sarina Gherabat and Faezeh Javadi were sentenced to five years each. Ms. Gherabat is from Oshnavieh and is a member of the national shooting team. She was violently arrested some 50 days ago.

Shiva Kianfar and Parsa Dastmalchi each received four years, and Sonia Sotoudeh was sentenced to three years in jail.

Shiva Kianfar was arrested at home in Urmia on September 24.

The verdicts can be appealed and revised by the Revision Court of West Azerbaijan Province.

Considering the short time since the arrest of these protesters, it is believed that the legal procedures have not been carried out properly. The case was originally undertaken by the second branch but subsequently handed over to the third branch, which issues heavy sentences. Both these issues have caused concern for the families and human rights activists in Azerbaijan.

Zahra Nazari, a lawyer, practicing in Sari, the capital of Mazandaran Province in northern Iran, was arrested at her office on November 21, 2022, and her electronic devices confiscated.

Originally from Neka, Ms. Nazari has been practicing for 12 years and is the mother of a 5-year-old girl.

Student activist Soha Mortezaii was also arrested on November 21 and taken to jail to serve her time in prison. Ms. Mortezaii was badly brutalized at the time of the arrest. She was a Ph.D. student of political sciences when she was arrested and jailed in 2019. She was later deprived of continuing her education. She had been temporarily released on bail.