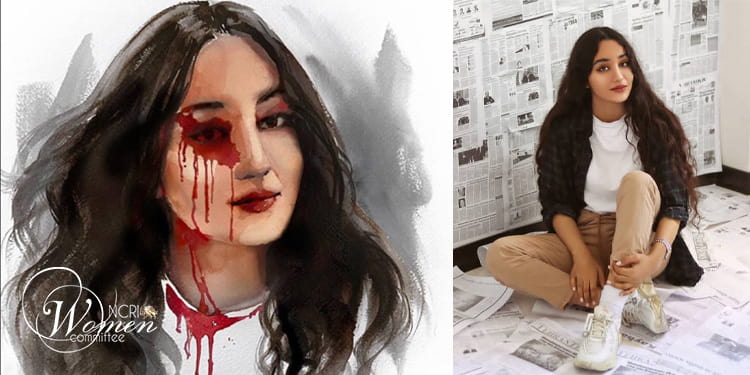 Ghazal Ranjkesh (right) before being shot and blinded. Left, the graphic posted on social media in solidarity

Today, on Day 74 of the Iran uprising, Iranian students and protesters held symbolic acts of solidarity with a young woman blinded by security forces in Bandar Abbas, southern Iran. The young woman was Ghazal Ranjkesh, #GhazalRanjkesh, a law student. She was shot in the eye when returning home with her mother on November 15, 2022.

Some hours after being operated on, she explains her story on Instagram: “I was returning home to rest after 4 hours of class and 9 hours of work. The last image my right eye recorded was the smile of the man shooting at me.

“He didn’t know I was bulletproof. He didn’t know that my body and soul were greater than to tremble before his rifle and withdraw. Just when I couldn’t breathe from the pain in my eye, the first question I asked was, ‘Mom, are you OK? Were you shot?’ That’s me, Ghazal.”

Numerous pellets destroyed the eyeball, her eyelid, and part of her face. In the postscript to her story, she wrote, “After a 3-hour operation, doctors removed the pellets from my eye. My eyelid was repaired by plastic surgery. There are 52 stitches in my right eye, with which I can no longer see. The retina has been totally damaged, and there is no possibility of grafting the cornea.”

Social media users have expressed their sympathy, solidarity, and support for Ghazal Ranjkesh, who braved the pellets to protect her mother.

Students at the Art University of Tehran and metro passengers engaged in symbolic acts of solidarity with Ghazal Ranjkesh, as pictured below:

Hundreds of protesters have lost their eyes

Ghazal is one of the hundreds of protesters turned blind by security forces.

On Friday, November 25, 2022, a group of 140 ophthalmologists in Iran wrote a letter to the president of the Medical System. The doctors warned that many people treated by medical centers had lost their sight in one or two eyes due to being shot in the eye by bullets and paintballs.

Niloufar Aghaii, a midwife, was shot in the eye last month during the doctors’ protests outside the Medical Organization building.

The New York Times wrote on November 19, 2022, hundreds of victims have suffered severe eye injuries inflicted by Iranian security forces since mid-September, according to doctors and medical facilities. “Among the most irreversible effects of the government’s efforts to crush the uprising has been the blinding of people taking part in them. Across Iran, scores of protesters have gone to hospitals with eyes ruptured by the metal pellets and rubber bullets that security forces fire to disperse crowds.

“The full scope of the injuries in Iran has been largely concealed by an internet blackout there. But medical evidence given to The Times by doctors, protesters, family members of patients and rights groups revealed that ophthalmology wards in hospitals have been inundated with hundreds of eye wound victims. Eyewitness accounts and more than 80 pages of medical records from several hospitals and clinics showed that the range of injuries have included mutilated retinas, severed optic nerves, and punctured irises.”

During the 16 days of activism to Eliminate Violence Against Women, the NCRI Women’s Committee hereby draws attention to the violation of the rights of hundreds of Iranian protesters who have sustained eye trauma. Their right to physical integrity has been violated by the excessive actions of security forces in Iran.

Eye trauma has consequences on the lives of those injured because of multiple negative effects on victims’ physical and psychological health, work situation, and family environment.

We urge the UN Human Rights Council and the fact-finding mission to investigate these cases and bring to justice their perpetrators.