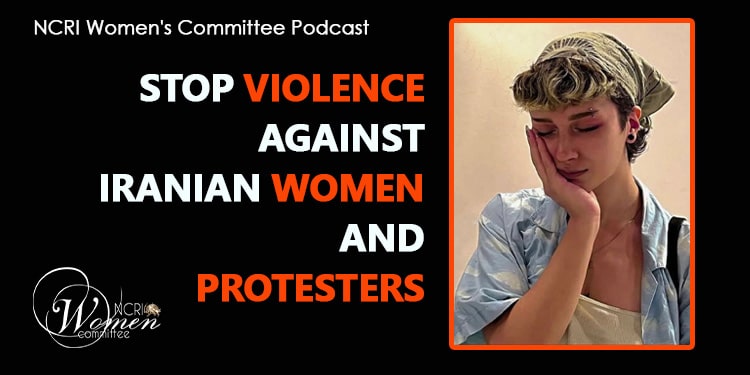 The world marked the International Day for the Elimination of Violence against Women on November 25.

Just the day before, the UN Human Rights Council held a Special Session that approved a resolution to form a fact-finding mission to investigate human rights violations in Iran. Virtually all delegates in this special session admired the courage of Iranian women protesters in leading the protests and standing up to the brutal regime in Iran.

These are the days of unity and activism worldwide to end violence against women and girls by calling for global action to increase awareness, promote advocacy, and create opportunities for discussion on challenges and solutions.

In this episode, we want to increase awareness of the state-sponsored violence against women in Iran and the escalated brutal repression of women in the heat of protests that have been going on for 76 days.

The first important thing to note is that violence against women has drastically increased during the days of the Iran uprising as it is directed against Iranian women protesters. The regime’s attempts to quash the protests have resulted in irreversible damage and deaths.

We’ve previously discussed how security forces beat protesters in the head. The heavy blows of batons, the butt of the rifle, or other heavy objects to the head of the protesters have led to numerous brain deaths, internal bleeding, and eventual deaths of protesters either on the spot in the streets or later in prison or in their homes.

This was the way they killed Mahsa Amini in the first place.

We have also talked about the cases of Sarina Esmailzadeh, Nika Shakarami, and Asra Panahi in one of the previous episodes. But I’ve learned of many more young women and men who were killed in this manner.

To name a few of the young women who lost their lives in this manner.

Arnika Qaem Maghami, 17 years old, fell into a coma due to the heavy blows of batons and died after 10 days.

Sadaf Movahhedi, 17 years old, was repeatedly hit in the head and chest after a protest in their high school.

Sarina Saedi, 15 years old, was shot by pellet guns during a protest in Sanandaj. Then security forces surrounded her to prevent her escape. Then they beat her in the head so much that she died on the spot.

The 16-year-old Hasti Hossein Panahi was summoned to the Department of Education for participating in an anti-regime protest at school. There, she was viciously beaten by the authorities. Then they put her on a school bus and threw her off the moving vehicle, claiming she had attempted suicide. She’s still in a coma after nearly one month.

Violence against Iranian women protesters – shot in the eye and blinded

Some protesters do not lose their lives but their eyes and can never see again. Hundreds of protesters, including Iranian women protesters, are being shot in the eye by security forces. Their pellet guns blind the protesters.

There are reports of various groups of doctors, i.e., ophthalmologists, who wrote open letters and announced that hundreds of people treated in medical centers had lost one or both eyes after being shot by pellet guns or paintballs.

A few cases have found their way to social media. One of them was a midwife, a nurse named Niloufar Aghaii, who was shot in the eye during a protest by doctors in Tehran just last month. A female doctor named Parisa Bahmani was shot and wounded in this same protest and lost her life after three days.

But more recently, there was the high-profile case of a young law student in Bandar Abbas, a Persian Gulf port city in southern Iran. Her name is Ghazal Ranjkesh. Doctors removed many pellets from her right eye and sewed it up with 52 stitches during a 3-hour operation. Ghazal lost not only one of her beautiful eyes but also a part of her face that was badly damaged by pellets.

According to a story she posted on her Instagram, she was returning home with her mother after 4 hours of class and 9 hours of work. Apparently, they got caught in the protests, and a security officer wanted to shoot her mother. So, she moved to cover her mother but was shot in the eye.

The use of sexual assault against incarcerated protesters, particularly Iranian women protesters, is so extensive that foreign media have also reported it.

CNN corroborated several reports of sexual violence against Iranian women protesters. At least one of these caused severe injury, and another involved the rape of an underage boy. In some cases, sources who spoke to the victims told CNN that the sexual assault was filmed and used to blackmail the protesters into silence.

Armita Abbassi, a young 20-year-old, was gang raped in prison many times. Her case was reported by the medical staff in a hospital. She was rushed to the hospital on October 17. Her head had been shaved, and she was shaking violently. The medical staff thought she had cancer, but later, it became clear that she was bleeding from her rectum due to repeated rape.

Plainclothes security forces ordered the doctor to report it as rape before arrest. At least four or five medics confirmed that she had been raped in custody.

This is happening to both young women and men. This is their way of breaking the detained protesters, but the victims are afraid to talk about it. The stigma attached to victims of sexual violence also adds another layer of secrecy to what’s unfolding.

Having the guts to fight such a brutal regime

These young women and men have the guts to fight this ruthless regime. They say we’ve got nothing to lose but our chains. They know that being selfless, united, and organized is key to their victory and achieving freedom. They are fighting with open eyes.

All of them know that they might not return home once they leave to participate in a protest. They know what awaits them if they get arrested. But they are determined to pay the price and topple this heinous regime, whatever the cost.

As we have repeatedly called since last year, the misogynous mullah regime is not qualified and does not deserve a seat in the CSW. Iran’s seats at the UN belong to the true representatives of the Iranian people.

Ask your governments to push for sending a delegation to visit Iranian prisons and especially talk to female political prisoners.