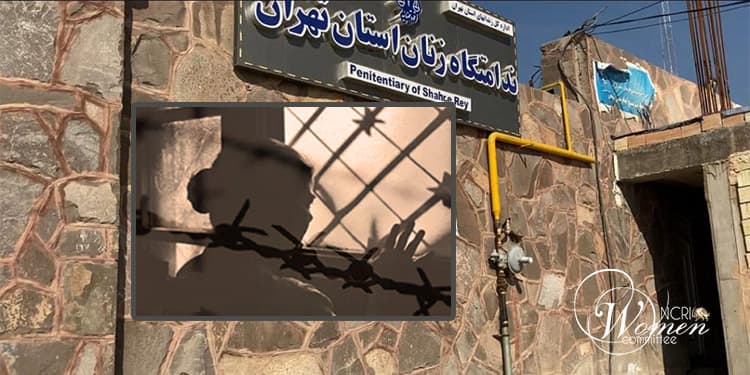 The conditions of women protesters in Qarchak Prison are catastrophic.

A woman released recently from Qarchak Prison reported on the catastrophic conditions of women protesters in Qarchak Prison. She said some women arrested during the uprising had been taken to Qarchak and detained in Ward 8.

The prisoner who spent some time in Ward 8 of Qarchak Prison said the conditions of women protesters were horrible. The prison’s warden, Soghra Khodadadi, warned the inmates that if any news of the conditions in the ward was leaked out, she would cut off all the telephone lines of Ward 8!

According to the former inmate, one of the most serious problems in Ward 8 was a food shortage. “Prisoners are always hungry.”

There are only three baths and toilets for 150 inmates detained in a ward that was made to accommodate only 50 prisoners.

The new arrivals sleep in the corridors since they do not have any place to sleep.

The prisoner released recently from Qarchak Prison added, “The sanitary conditions and hygiene were disastrous. Lice were everywhere. On the other hand, prisoners are not allowed to receive warm clothing. Some families tried to send warm clothing for their daughters, but the prison authorities returned the clothes and did not give them to the inmates.”

The prison has no potable water, and inmates must buy mineral water. Baths have warm water for only two days a week.

Soghra Khodadadi has warned the inmates that if any news of the horrible conditions in Qarchak is leaked, she will cut off all the telephone lines in Ward 8.

Those arrested in the protests are taken to Ward 8.

The NCRI Women’s Committee repeats the Iranian Resistance’s call in urging the UN to send a delegation to visit Iranian prisoners and interview the detainees, especially the female political prisoners.

The notorious Qarchak Prison in Varamin is the only all-women prison in Iran used to detain women convicted of violent offenses and as an internal exile for female political prisoners. There is no separation of crimes in this prison, and political prisoners are held along with common prisoners and dangerous criminals. In a word, the conditions of inmates in Qarchak Prison are abysmal.

Qarchak and Evin prisons are the main places where the arrested women protesters are detained.

Also known as Shahr-e Ray Prison, Qarchak Prison is a disused industrial chicken farm in a desert area of eastern Tehran, falling far below international standards. Some 2,000 prisoners are held in overcrowded and unsanitary conditions, without access to drinkable water, decent food, medicine, and fresh air.

One of the most tragic conditions is mothers with their children locked up with them.

Female protesters released from Qarchak Prison have reported that inmates were sexually abused by prison guards and authorities to the extent that some have gone into a mental state.

Prisoners are also denied proper medical treatment by doctors and other medical staff. There are concerns about the reliability of medical equipment at the prison clinic. There have also been reports that a lack of stretchers and wheelchairs has resulted in fellow detainees being forced to carry sick prisoners out of their rooms and into the clinic, leading to falls and other accidents.

Amnesty International has reported that women requesting emergency medical care in the evening or at night have been refused treatment by doctors and nurses until the following day and even berated for purportedly disturbing the medical staff’s sleep in the middle of the night.