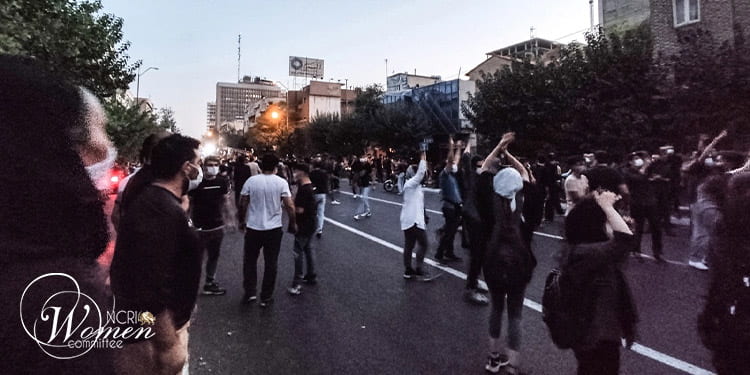 The following article, written by Mina Lotfi, a female member of Resistance Units inside Iran, was published by the British Express.

Day of the ayatollahs is over, quietly or with violence, they will be removed

I have worked for years as a tailor in Iran and have become quite good at using needles and sewing machines to sew, mend, and alter posh women’s clothes.

But since September 16, my life has totally changed, and I have become used to other tools and other skill sets. Nowadays backpacks are indispensable, and I mastered the use of things like tear gas neutralization devices, which I carry when I take part in protests.

At 25, I am one of the young Iranian women who have been battling in the streets for the past two months, trying to overthrow the theocratic regime and establish a democratic republic. What is taking place in Iran is a revolution.

As a member of the Resistance Units affiliated to the People’s Mojahedin Organization of Iran (MEK), I team up with my friends in the southern city of Shiraz during most evenings.

Depending on what we have on the agenda, we might organize and participate in rallies, promote and direct those rallies, post graffiti with slogans like “Death to Khamenei” or “Death to oppressor, be it Shah or the leader (Khamenei)” on prominent walls, or set fire to billboards bearing pictures of Khamenei or Qassem Soleimani (the notorious commander of the Islamic Revolutionary Guards Corps who was killed by the US in Iraq in January 2020).

In the mornings, whenever we have spare time, we recruit new people for the Resistance Units.

Iran has simply changed. I have been a member of MEK Resistance Units for some time now.

There was always sympathy for the Resistance, but lately the public mood has totally changed. There is an aura of solidarity and unanimity for one objective: Freedom.

People help each other. They try not to leave anyone alone. They leave the door of their houses open for the protesters to take refuge.

For years the regime has tried to divide the people based on their ethnicities. But that strategy has failed. When the regime massacred our compatriots in Zahedan in destitute Sistan and Baluchestan Province, people in other cities took to the streets and chanted, “From Zahedan to Kurdistan to Khuzestan, I will sacrifice my life for Iran.”

People are determined to liberate Iran and take back their homeland.

I am at a loss to describe the cruelty and savagery of the ayatollahs, though at times, I have felt very close to the threats against our very lives.

During a rally one evening, the IRGC and Bassij forces attacked us from all directions.

The IRGC fired pellet guns, and Bassij forces attacked with whatever they had in their possession, including batons and knives.

They started beating people – men and women, young and old – mercilessly and with all their strength.

As we were organizing the people to hold their ground, one of the Basijis was about to grab me on my arm when one of my friends courageously charged at him and gave me a split second to run away. I still cannot fathom what would have been awaiting me if I had been arrested.

People have demonstrated courage and unmatched bravery during this uprising.

That same evening, the people did not back down against the brutalities of the IRGC and Bassij. They were not intimidated; they confronted them. That is something new. Fear is fading away.

Every day that we protest, I see more people are no longer afraid of the IRGC, and they don’t run away from them. They don’t retreat but hold ground and fight back.  Simply put, the regime’s repression is not effective anymore…

There is a sense of political maturity behind this uprising, particularly among the youth. They are clear-eyed about their aspirations. They want the regime to be overthrown.

They don’t want a supreme leader or the mullahs. And they do not want the Shah either. They simply don’t want any form of dictatorship. They want genuine freedoms, in a democratic republic. Iran is like a fire and wants to burn the roots of all oppression – a united nation determined and ready to embrace democracy and freedom.

It is freedom that we will earn with our toil and our blood. This is our conviction. But at this moment, it seems like the West wants to just be a bystander and watch.

Up to this point, the West has been listening to the regime and trying to reach a compromise with it, but this has not come to pass. This regime is not willing or able to negotiate. And now the people are in the streets, making history. The West should stand by the Iranian people, not merely with words, but with actions.

The West should recognize our legitimate right to resist and defend ourselves.

All we are asking is that our legitimate rights be recognized. How do they expect people like me, with bare hands, to stand before armed IRGC and Bassij forces?

Proscribe the IRGC as a terrorist entity; close Iranian embassies; guarantee our unhindered access to the internet.

The West should take these actions, and we will overthrow the ayatollahs ourselves. It is not a dream anymore. We feel it and we will continue to strive for it.