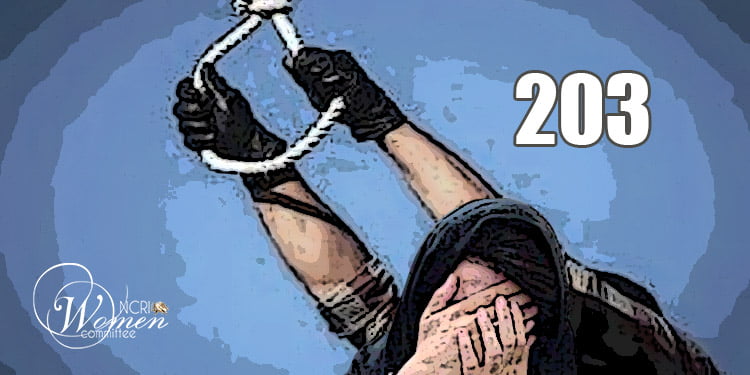 The clerical regime hanged another woman in Isfahan.

Mowloud Mollazadeh had been detained since 2017 for murdering her father-in-law. She was transferred from Dowlatabad Prison to Dastgerd on Wednesday at noon to implement her death verdict. She was detained in solitary confinement until Saturday morning, when her sentence was carried out.

Mowloud Mollazadeh was the 203rd woman to be executed in Iran since 2007.

An unidentified woman had been hanged on October 27 in the Prison of Borujerd.

The world community and the UN human rights agencies need to take action to stop the spiraling trend of executions in Iran.

The Iranian regime is the world’s top record holder of executions of women.

The Women’s Committee of the National Council of Resistance of Iran has compiled the names of these women in a list called “List of Women Executed in Iran since 2007.”

No government in the world has executed so many women. The list does not account for the tens of thousands of women executed in Iran on political grounds.

The Iranian regime is the world’s top record holder of executions of women.

The NCRI Women’s Committee has previously mentioned that many of the women executed by the mullahs’ regime are themselves victims of domestic violence against women and have acted in self-defense.

An average of 15 women executed in Iran per year

The Iranian regime open-handedly uses the death penalty as a form of punishment. In many cases, religious and ethnic minorities, political dissidents, and women are targets of the death penalty in a discriminatory manner.

In 2019, the mullahs’ regime hanged 16 women in tandem with increasing suppression and executions in Iran. In December 2019 alone, six women were executed by the regime in various Iranian prisons.

At least 26 women have been executed in Iran since August 2021 when Raisi took office.