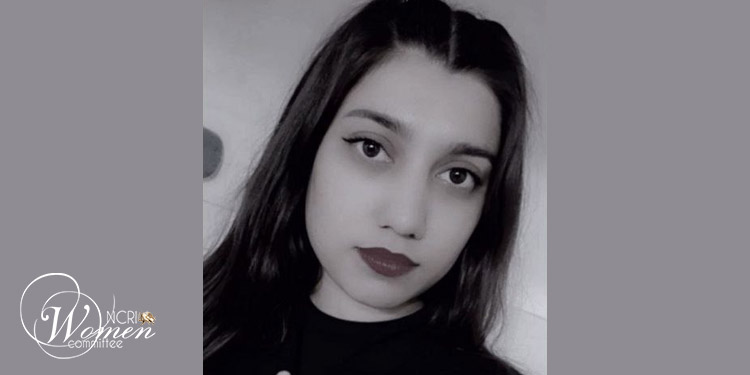 Fatemeh Gorji sentenced to one year in jail and 74 lashes.

On Day 82 of the Iranian people’s nationwide uprising, it was reported that Fatemeh Gorji, a chemical engineering student at Semnan University, had been sentenced to one year in prison and 74 lashes.

Fatemeh Gorji, 23 years old, is a master’s student in chemical engineering majoring in the environment at Semnan University. On her way to the dormitory on October 14, Semnan intelligence officers arrested her and put handcuffs and blindfolds on her. She was detained in solitary confinement, blindfolded for some time.

She was released on bail after spending some time in jail and solitary confinement. However, her trial was held on November 8 at Branch 102 of the 2nd Criminal Court of Semnan. Fatemeh Gorji was sentenced to one year in prison, 74 lashes suspended for four years, a ban on leaving the country for 2 years, and a ban on membership in political and social groups and parties on charges of “disturbing public order and peace by participating in protests.”

The second trial of Fatemeh Gorji was held on December 5. The court acquitted her of disrupting national security, insulting Khamenei, and insulting the sanctities. Still, she was sentenced to one year in prison for “propaganda against the state.” During these trials, Fatemeh Gorji was denied access to a lawyer.

Melika Gharagozlu on hunger strike in the psychiatric hospital

Melika Gharagozlu’s lawyer reported that in a call home on Saturday, December 3, she told her mother that she had been assaulted by several men. They were going to tie her hands and feet to the bed and inject her with ampoules. So, she started a hunger strike in protest.

On Saturday, October 1, ten men and one woman broke into Melika Gharagozlu’s residence and arrested her. Then 20 days ago, the regime’s judicial and security officials transferred her from Qarchak Prison to Amin Abad mental asylum without informing her family and lawyer.

Melika Gharagozlu was arrested by security officers on July 13 for removing the mandatory hijab and was imprisoned in Evin prison. She was released on bail on August 24.

Several doctors and psychiatrists have confirmed that Melika Gharagozlu is physically not fit to endure jail.  Nevertheless, she is still being held in prison in limbo.

Amin Abad Psychiatric Hospital is a place where political prisoners are taken to be tortured as much as possible. And all the staff of this place is members of the Ministry of Intelligence.

After nearly four weeks after Dena Sheibani’s arrest, her family does not have reliable information about her condition.

Dena Sheibani was arrested on November 10 on Qeshm Island, where she had traveled to visit her sister. The IRGC intelligence arrested her while she was riding a SNAP taxi. She was taken to Shiraz, where she was detained for at least some time at No. 100, the detention center of the Department of Intelligence.

One of the people released recently from No. 100 has confirmed that Dana Sheibani is under severe mental and physical torture to falsely confess that she worked for the security services of hostile countries. The witness personally heard the sound of blows hitting Dena’s body.

Dozens of girls under 18 in Adelabad prison in Shiraz

Dozens of girls under the age of 18 are facing charges of “corruption on Earth” in Adelabad prison in Shiraz.

In a call to her brother, Elham Afkari said dozens of girls under the age of 18 are incarcerated in Adelabad prison in Shiraz, and each of them faces several serious charges, including corruption on Earth and waging war on God (Moharebeh). They have been arrested for participating in protests.

Elham Afkari is the sister of Shirazi wrestler Navid Afkari. She was arrested on November 10 with her husband and 3-year-old daughter. Her husband and child were released after some time, but she is still in prison.

Elham Afkari is in the same ward with a 16-year-old girl accused of “corruption on Earth,” Moharebeh, and 4 other charges. She said she was detained with 40 other people, none of whom have committed any crime, but each has several serious charges in their case.