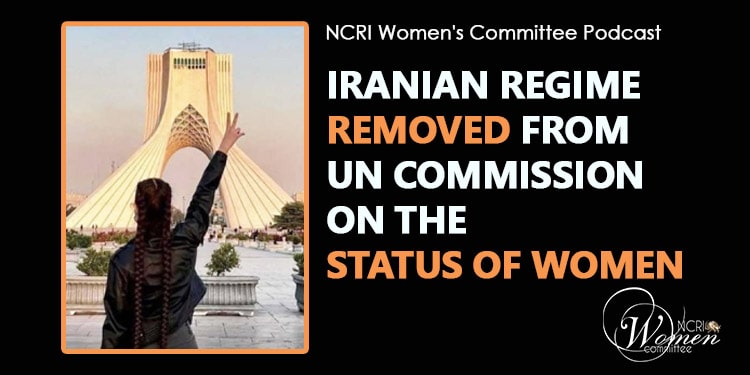 Iran regime removed from UN Commission on the Status of Women

Iran regime removed from UN Commission on the Status of Women

Congratulations to all freedom-loving women of the world, especially the courageous women and girls in Iran, on removing the Iranian regime from the UN Commission on the Status of Women (CSW).

The landmark decision was made after heated debates since it was unprecedented for the UN to expel a member state from its commissions.

The Commission on the Status of Women (CSW) is the principal global intergovernmental body exclusively dedicated to the promotion of gender equality and the empowerment of women.

The Economic and Social Council of the UN, ECOSOC, established the Commission on June 21, 1946. During the Commission’s annual two-week session, representatives of UN Member States, civil society organizations, and UN entities gather at UN headquarters in New York. They discuss progress and gaps in implementing the 1995 Beijing Declaration and Platform for Action, as well as emerging issues that affect gender equality and women’s empowerment.

The NCRI Women’s Committee denounced the Iranian regime’s membership in CSW as a step against women’s rights and human rights that encouraged further suppression of Iranian women. The committee urged the international community to condemn the CSW membership of the clerical regime, the worst enemy of Iranian women.

It said the regime’s membership in CSW insulted Iranian women who struggled to regain their rights for more than four decades against the medieval mullahs’ regime.

Since then, the Iranian Resistance and the NCRI Women’s Committee have kept calling for the removal of the Iranian regime from the Commission on the Status of Women.

After all, there is no sense in giving a seat on the UN Women’s Commission to a regime that violates all women’s human rights. However, the legitimate demand of the Iranian people and Resistance fell on deaf ears until last September.

Over the past 90 days, the world witnessed Iranian people once again rising up for their rights. They especially saw Iranian women bravely leading the protests. And they saw the regime’s brutality in responding to these calls for change.

Finally, the US decided to lead the initiative to remove the Iranian regime from the Commission on the Status of Women.

The US Ambassador Linda Thomas Greenfield.

The resolution this Economic and Social Council will consider today is important. It will reverberate across the globe. This resolution answers the call of civil society voices in Iran.

These women and activists have appealed to us, the United Nations, for support. They made their request to us loud and clear: remove Iran from the Commission on the Status of Women. The reason why is straightforward. The Commission is the premier UN body for promoting gender equality and empowering women. It cannot do its important work if it is being undermined from within. Iran’s membership at this moment is an ugly stain on the Commission’s credibility.

First, the Commission on the Status of Women is the world’s main body dedicated to the promotion of gender equality. In recent weeks, Iran has tightened its oppression of women and girls. Its actions are inconsistent with the objectives of the Commission and are incompatible with membership.

Second, the severity of Iran’s brutal and disproportionate state-sponsored use of force against protesters calling for “Woman, Life, Freedom” over the past several weeks have appalled the world. Here at the UN, we cannot sit by and allow the violence that led to the arrest and death of Mahsa Amini to continue with impunity.

Third, instead of engaging with the international community, the Iranian government has responded by deepening its violent oppression. 350 people have died, including over 60 children; 14,000 people have been arrested; and Iran has begun executing people for exercising their right to peaceful assembly.

Iran’s brazen onslaught against the human rights of its citizens, and its persecution against women and girls, is without end. From dictating what a woman should wear to how a girl must speak.

Even using sexual violence as a weapon of intimidation against peaceful protesters. Iran’s actions demonstrate it is willing to use every available tool of oppression against its own people.

It is unacceptable that Iran, a country which flagrantly disregards women’s and girls’ human rights, could continue to serve on the Commission. Iran’s actions are fundamentally incompatible with the Commission’s mandate.

Widespread calls for change have fallen on deaf ears. Words have failed. The recent actions by Iran demand action by us, the UN’s Member States.

Excerpts of the statement of the EU representative at the council:

We are witnessing the widespread, brutal and disproportionate use of force by the Iranian authorities against peaceful protesters, including women and girls who are playing a leading role in this protest movement and are demanding full and equal respect for their human rights and calling for an end to violence, oppression and discrimination. We strongly condemn the actions by the Iranian authorities and urge them to uphold their obligations and commitments under international law, including the International Covenant on Civil and Political Rights (ICCPR) and the Convention on the Rights of the Child, to both of which Iran is a party. We also call for those responsible for the death of Mahsa Jina Amini to be held accountable.

The resolution to terminate the membership of the Iranian regime was adopted by the UN Economic and Social Council on December 14, with 29 votes in favor, 16 abstentions, and 8 against.

The NCRI President-elect, the leader of the Iranian opposition, Mrs. Maryam Rajavi, welcomed the ECOSOC resolution deciding to expel the regime from the CSW with immediate effect.

She said: This illegitimate regime does not represent the people of Iran in any way. It must be shunned by the international community and expelled from the United Nations and its various agencies, especially UNICEF. The case of human rights violations by this regime must be referred to the UN Security Council, and the regime’s leaders must be prosecuted for more than 40 years of crimes against humanity and genocide.

Mrs. Rajavi added that consistent with the Universal Declaration of Human Rights, the Iranian people demand the recognition of their right to defend themselves and to overthrow the ruling dictatorship.

Reacting to the removal of the Iranian regime from the CSW, the NCRI Women’s Committee declared:

The expulsion of the mullahs’ misogynistic regime from the UN Women’s Commission was necessary, especially after dozens of women and teenage girls were killed in three months of protests in Iran. The membership of the child-killing regime of gender apartheid in the UN Commission on the Status of Women was wrong in the first place. It contradicted all the CSW goals and insulted the women of Iran and all the women of the world.

Misogyny, gender apartheid, and violence against women are institutionalized in the regime’s laws. Such a regime and its representatives are not qualified to be a UN member, let alone a member of the Commission on the Status of Women.

Never forget this victory at the UN was hard fought, tooth and nail, with the blood, sweat, and death of Iran’s women. The price should never have been so high. The world should not have allowed the Iranian regime to continue its crimes and slaughter the Iranian people with impunity.