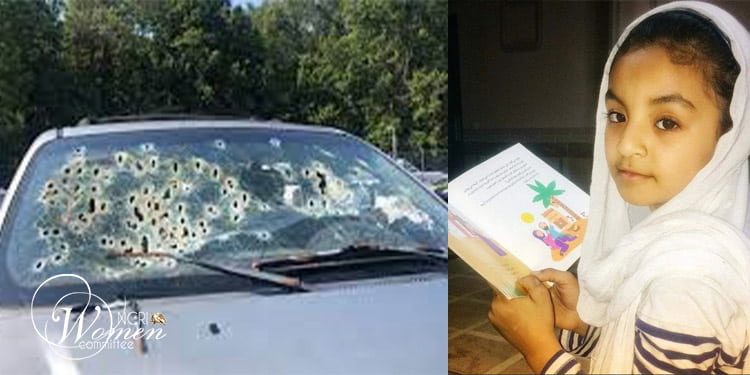 Soha Etebari, 12, killed by arbitrary shooting of the State Security Force in Hormozgan

Soha Etebari, 12, arbitrarily shot and killed inside her family’s car

Soha Etebari, 12, was shot and killed inside her family’s car by the armed forces of the clerical regime Sunday night, December 25, 2022.

Soha Etebari and her family drove on the road from Bandar Abbas, in Hormozgan province, to Ahvaz, the capital of Khuzestan, when security forces at a checkpoint in Bastak opened fire on their car. Badly injured, Soha Etebari lost her life on the way to the hospital.

Many people witnessed the incident, and it was not possible for the authorities to deny the crime. On December 26, Col. Moshavveq, the Deputy Commander of the State Security Force (SSF) of Hormozgan, tried to justify the arbitrary killing of citizens by claiming: “The SSF forces became suspicious of a Peugeot Pars vehicle with thick tinted glasses and ordered the driver to stop, but he sped away… Due to the road condition and the vehicle’s flat tire, unfortunately, one of the occupants of the car was shot and was taken to the hospital.”

The killing of the 12-year-old Soha Etebari took place on the night of the 40th day memorial of Kian Pirfalak, 9, who was killed in a similar incident in Izeh, Khuzestan, on November 16, 2022, during a vicious crackdown on protests in the city.

Kian Pirfalak commemorated on Day 102 of the Iran Uprising

Kian Pirfalak and his family were passing through in their car when they were targeted by plainclothes agents and security forces in Izeh. Kian was killed instantly, and his father was shot and injured.

On December 26, Day 102 of the Iran uprising, thousands of people participated in the 40th-day memorial of Kian Pirfalak in Izeh. They chanted, “Death to Khamenei,” “Death to the dictator,” “With Hijab or without Hijab, let’s go for a revolution,” and “From Izeh to Kurdistan, I give my life for Iran.” They thus targeted the main culprit behind killing innocent Kian and hundreds of children and youths killed during the Iran uprising since mid-September and called for the regime’s overthrow.