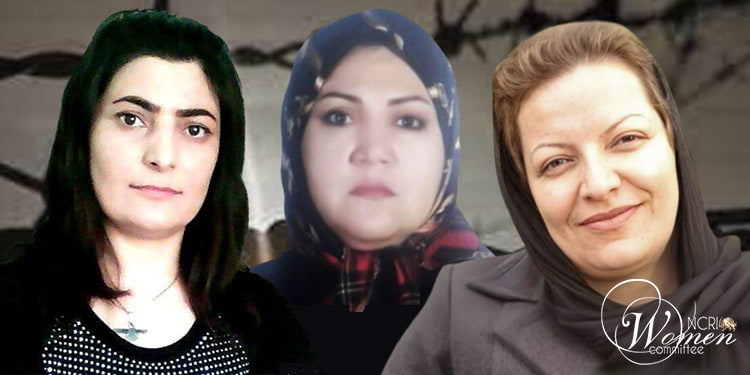 With chants of “Death to Khamenei” and “So many years of crimes, death to the supreme leader,” they renewed their vows with the slain protesters to continue their path to the end. In most protest ceremonies, women and girls actively participated and led the slogans.

With the progress of the uprising and nationwide protests, the political prisoners who were incarcerated before the recent uprising continue to remain under challenging conditions.

Kurdish political prisoner Zeinab Jalalian with a life sentence, has been incarcerated for 15 years. Zeinab Jalalian’s eye conditions have further deteriorated, and she is at risk of losing her eyesight. Zeinab Jalalian also suffers from various other illnesses. Prison authorities have deprived her of access to medical services, which is considered torture.

Kurdish sources have reported that during the recent uprising, Zeinab Jalalian was shackled and moved from the women’s ward of the Prison of Yazd to the detention center of the intelligence services. But Zeinab refused to cooperate with them. They have told Zeinab Jalalian that if she collaborates with the Intelligence Ministry, she will be released from prison. But she has continued to resist and remain firm.

On the other hand, in Evin Prison, political prisoner Fatemeh Mosanna is deprived of medical treatment and is dispatched to the hospital despite her abysmal physical conditions and her dire need for treatment.

Every time Fatemeh Mosanna refers to the dispensary, the clinic staff gives her an injection, an informed source said. But she needs special treatment and to be dispatched to the hospital. She has long been suffering from GI problems. Lack of care for her has added to her intestinal issues.

Presently, she suffers from intestinal bleeding. Mrs. Mosanna is also deprived of visiting with her husband, Hassan Sadeqi, who is incarcerated in Gohardasht Prison.

Another political prisoner is Sofia Sufi, who is incarcerated in the Central Prison of Mashhad. She is presently in dire physical condition suffering from various illnesses.

Mrs. Sufi is 49 and comes from Aligudarz, in Lorestan Province.

Political prisoner Sofia Sufi has been sentenced to five years in prison on the charge of “propaganda against the state, acting against national security, insulting Khomeini and Khamenei,” by the Revolutionary Court of Mashhad.

She has torn leg meniscus, lumbar disc, intestinal syndrome, and nervous colitis. Although her family has bought and provided her medications, the prison authorities have refused to hand her the medicines. Mrs. Sofia Sufi contracted the coronavirus, which caused a lung infection. Due to the lack of medical care, she is suffering from the effects of this disease.

Sofia Sufi is detained in ward 5 of the Prison of Mashhad. She and other political prisoners are deprived of fresh air and contact women in different prison sections.

The Penal Court No. 1 of Mahabad sentenced Golaleh Moradi, 48, to 10 years and one day in prison for “complicity in the murder” of an IRGC commander. The sentence was commuted to four years after the victim’s parents gave consent, according to paragraph A of Article 37 and paragraph A of Article 38 of the Islamic Punishment law. The four years consider the time she has already served in prison.

Golaleh Moradi was released on bail last spring. During her one year in the Central Prison of Urmia, she was deprived of access to a lawyer and not granted any leave.