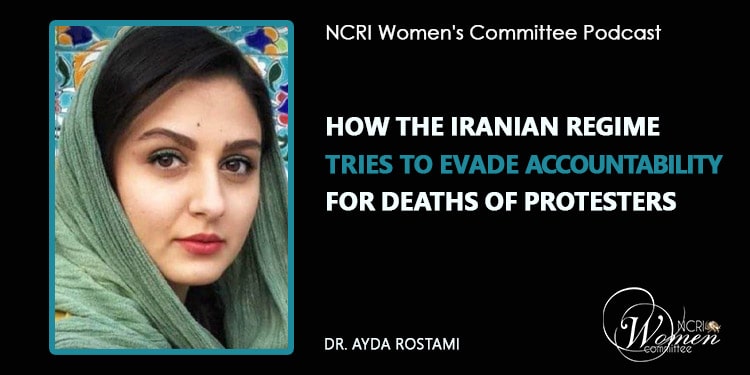 In this last episode of 2022, we will have an overview of a method the Iranian regime most commonly used in the recent uprising to evade accountability for the murder of protesters. Of course, we are going to focus on the cases of women.

During more than 100 days of the Iran uprising, we have frequently run into cases where the Iranian regime has officially attributed the deaths of protesters to accidents, suicides, chronic diseases, etc.

Behnaz Afshari was a college student killed in the protests in Pakdasht, but the Iranian regime officially announced that she was killed in an accident.

Qazaleh Qassemi, a 26-year-old woman working in an animal store, was killed by security forces with the blows of batons but officially claimed to have died in a car accident.

Fereshteh Ahmadi, the mother of two young children, was shot in the chest by security forces while standing on the balcony of her house. Still, the Iranian regime said she was shot from inside her house and pressured her father and brother to endorse this scenario.

Kobra Sheikheh was shot by the random shooting of security forces into people’s houses. Government forces subsequently broke into the house, filmed the place, and interviewed her husband. Later, however, they censored the interview and mixed it with statements by the governor, pretending that the protesters had shot Mrs. Sheikheh.

In the case of Neda Sheibani, a sports coach, they extracted forced confessions from her and aired them on TV as if she were planning a bombing plot.

The blows of batons killed Nasrin Qaderi, but the Iranian regime said she had been poisoned by drinking alcoholic beverages.

The most recent case was the case of Dr. Ayda Rostami, who, with her colleagues, went house to house and treated those wounded in the protests.

Dr. Ayda Rostami was a selfless and humanitarian doctor, only 36 years old.

Our listeners might have heard that many of those wounded in the protests do not go to a hospital for treatment because the intelligence services and plainclothes agents abduct the wounded from their hospital beds. That was the case during the November 2019 uprising and what they also did during the 1980s.

So, every protester wounded during the protests does not go to a hospital. They stay home and ask a trusted doctor to visit them at home. Dr. Ayda Rostami was a trusted doctor who saw patients in Ekbatan district, one of the hotbeds of protest in Tehran.

On Monday, December 12, she was visiting patients when she realized she had finished her bandage and gauze. So, she went out to get some from a pharmacy but never returned.

At noon on Tuesday, they called her family from the police station and informed them that Ayda had died in a car accident the night before and that they had to go to Tehran’s main cemetery, Behesht-e Zahra, to receive her body.

The Forensics Office had been ordered to write the reason for death as “being struck by a hard object” in “an accident.” They did not want to show the body to the family, but the family insisted on seeing it.

When they opened up the wrapping, the family was shocked to see Dr. Rostami with a smashed face and nose, broken arms, and an enucleated eye. Her body was also bruised in the lower part indicating the scars of a sexual assault. Obviously, she had been killed under torture.

The police, however, have yet to show the place of the accident or Ayda’s car to her family.

The circumstances of Dr. Rostami’s death outraged the public, so the Judiciary came out and gave an explanation.

The Judiciary said Dr. Ayda Rostami had thrown herself from a pedestrian bridge after arguing with a man they said was her boyfriend.

The case of Dr. Ayda Rostami is one of the latest cases of the Iranian regime’s false narratives about the deaths of protesters. Since the beginning of the protests in Iran in mid-September, the Iranian authorities have been spreading false reports to cover up their role in the deaths of young protesters.