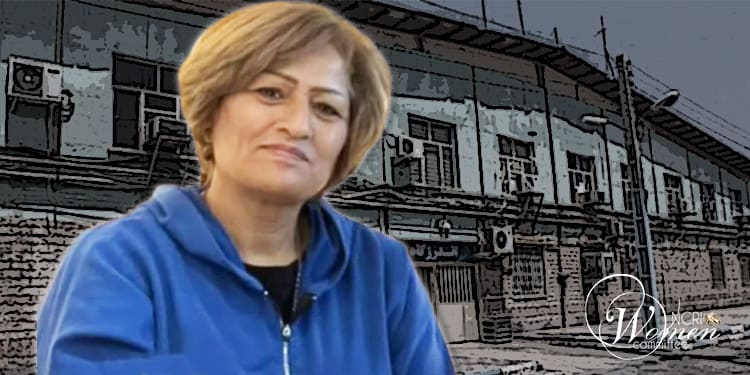 Retired paramedic Soheila Ojaghi has been sentenced to 6 years in prison in the primary court and is currently incarcerated in Qarchak prison. Due to her age, she is accused of being the leader of the Iran protests.

Soheila Ojaghi was born in 1967 in Gonbad Kavos and immigrated to Tehran with her family many years ago.

She was arrested on November 15, 2022, in Tehran’s Parand Square. She was held in temporary detention for only one day, then transferred to Qarchak prison along with more than 400 other detainees.

The security services arrested Soheila Ojaghi as a “protest leader” and accused her of having a leadership role in protest rallies, even in prison.

Soheila Ojaghi used to participate in protests in the Parand district. She was alone, and no one went with her. On November 15, she and other protesters were attacked and arrested by repressive forces in Parand Independence Square.

Security forces were sensitive to her because her age differed from other protesters. During the interrogations, she was told that all the protesters were young, but she, a retired paramedic, was in the center of the protesters. The interrogators accused her of being the leader of that group, and they chased her with a drone.

Soheila Ojaghi had not been in contact with anyone and only protested the country’s economic situation and the inability of retirees like herself to make a living. Although Ms. Ojaghi emphasized that she had no connection with other participants in the rally, she is still under the charge of being a leader and has been kept in quarantine. She is neither in solitary confinement nor can she hope for freedom like other prisoners.

Another charge of Soheila Ojaghi is organizing the protestors in the demonstration on December 30 in Tehran’s Behesht Zahra cemetery. Soheila Ojaghi was in prison that day, but the interrogators questioned her about leading those protests.

Soheila Ojaghi suffers from serious lung problems and asthma. In recent months, she lost her 37-year-old daughter. She has been in court twice, but a final verdict has not yet been issued against her.

Soheila Ojaghi has been under severe mental and emotional pressure during the interrogations. Once, she told her interrogator that all her fear until the day of her arrest was about being arrested and possible interrogations in the detention center and prison, but this last fear of her is now gone.

The clerical regime continues to harass and pressure the families of the victims of the crackdown on the November 2019 protests.

Although two weeks have passed since the arrest of Tahereh Bejervani, she is still in custody and an undecided situation. The relevant authorities refuse to post bail for her temporary release.

Tahereh Bejervani is the widow of Ali Fatouhi, one of the protesters killed by security forces during the November 2019 uprising.

On the morning of Wednesday, December 21, armed security forces attacked the workplace of Tahereh Bejervani and abducted her. The Bejervani family referred to the Quds court but did not receive an answer.