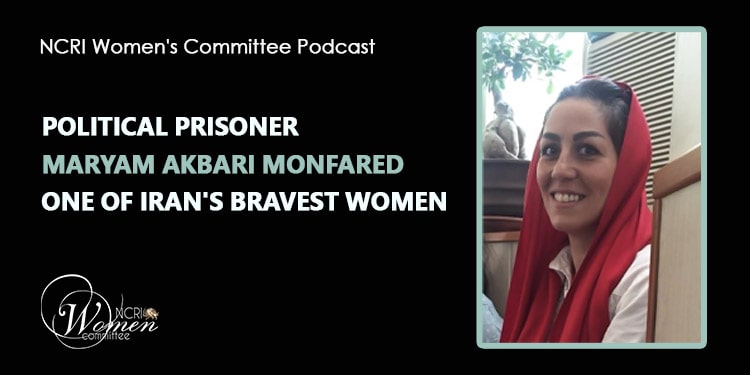 Today, we bring you the story of one of the bravest women of Iran. A mother of three girls who has been in prison for 13 years without a single day of leave.

We’re talking about political prisoner Maryam Akbari Monfared. On December 29, as the world was celebrating Christmas and the New Year, she marked the end of her 13th year in prison for seeking justice for her siblings executed by the Iranian regime in the 1980s. Maryam had been imprisoned in the women’s ward of Evin Prison until the 9th of March 2021, when she was violently brought out of her cell and banished to Semnan. She is the only political prisoner in the women’s ward of Semnan Prison that she describes as a “hell.” She sent a letter from this prison.

Born in 1975, Maryam Akbari Monfared was arrested on December 29, 2009, on the charge of being a supporter of the People’s Mojahedin Organization of Iran (PMOI/MEK). She was taken to Evin Prison in the middle of the night, without a warrant, and under the pretext of providing explanations.

In her letter, she wrote about that night:

“Without giving me a chance to say goodbye to my loved ones, they took me to Evin prison to give some explanations and made the ridiculous promise that ‘you will return to your children in the morning. As of December 29, 2022, thirteen years have passed since I was separated from my 4-year-old Sarah and my two 12-year-old daughters on that winter midnight.”

Since her arrest, Maryam has been under constant torture and pressure, including the denial of urgent medical treatment.

“This is not a story you are reading; it’s the true story of the suffering of only one out of 85 million,” Maryam wrote in her letter. “On this side of the bars, in the dark desert of torture and oppression, as far as one can see – even where one cannot see – there is just vileness and brutality.”

Maryam Akbari Monfared is one of Iran’s most resistant political prisoners.

Atena Farghadani, a cartoonist and a former political prisoner, described Maryam Akbari Monfared as “A woman whose resistance was a rainbow of hope for all the prisoners.”

In another part of a Facebook post, Atena wrote, “What makes Maryam indelible in my mind is her image as a woman who has been serving her sentence for eight years without a single day of furlough! Whenever I got mad, she came to me and whispered, “Don’t let the cameras record your anger and frustration. Smile!” Whenever it rained or snowed in the small precinct where we were supposed to breathe fresh air, she ran around and laughed passionately.

Three of Maryam’s brothers and a sister were executed by the mullahs’ regime.

Alireza Akbari, an MEK member, was executed in 1981.

Gholamreza Akbari, also a member of the MEK, was killed under torture in 1985.

MEK members Abdulreza and Roghiyeh Akbari were executed during the 1988 massacre of more than 30,000 political prisoners.

If you ask me, how did I survive in the darkness of torture and exhaustion of time? I say that the blazing flame of faith in my heart has kept me going.

Amid loneliness with empty hands, this warm and rebellious flame is what the interrogators want to steal from the prisoner from the first moment of her arrest so that her being freezes and surrenders to the yoke.

But I kept it burning for all 13 years with the sacred fury I felt over the tortures I witnessed that pierced my heart! I laughed and made others laugh so I could stand firm because resistance is our heart.

Faith in the cause that my brothers and sisters died for. Faith in the path I stepped into and faith in the clenched fists and firm steps of the young people who are now protesting in the streets against the dictatorship, with their lives.