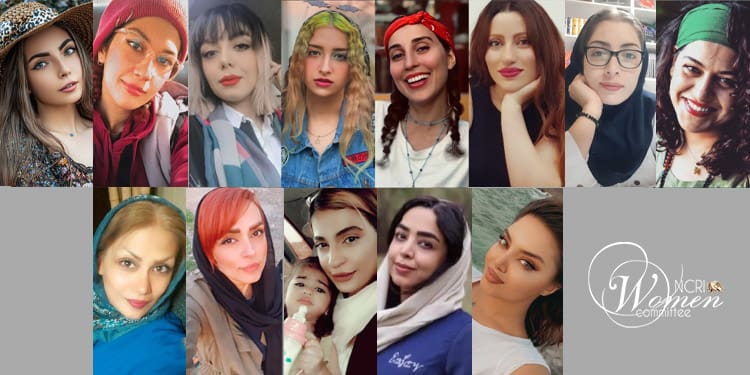 It turned a week on Monday, January 9, that 15 young women detained in Fardis Prison (Kachouii) in Karaj have started their dry hunger strike. The 15 young women are protesting the prolongation of their detention, undecided status, lack of examination of their cases, and lack of medical care. But even then, they were deprived of the right to call and visit their families.

Based on social media reports, these detained protesters objected to the unsanitary conditions of the prison but were brutalized and beaten up. So, they started a dry hunger strike on January 2, 2023.

It is noteworthy that the judge presiding over their case is Asef Al-Hosseini, the same man who issued death decrees for dozens of protesters, including Mohammad Mehdi Karami, 22, and Seyed Mohammad Hosseini, 39, who were executed early morning on Saturday, January 7.

The families of the 15 young women who held a sit-in gathering outside the prison were arrested on Sunday, January 8, and released after several hours.

Each of the 15 young women on hunger strike has a story of their own that helps us learn more about the true character of the brave Iranian heroines who lead the uprising and revolution in Iran.

The most famous of these detainees is Armita Abbasi, 21, the story of whose sexual abuse and gang rape upset every conscientious human being. We will not repeat that bitter tragedy. But imagine how resilient and robust a young woman could be and how liberated she is from the chains of taboos of centuries to dare to stand up for her rights by going on a hunger strike after going through such an ordeal. She is a role model of perseverance.

Armita Abbasi’s parents are one of the families who have gathered outside Kachouii Prison, demanding the freedom of their loved ones. Armita’s parents said Armita’s blood pressure had dropped.

A post by Armita’s mother reveals the regime’s pressures on the families of detained protesters. Addressing the judiciary officials of Karaj and Alborz province, she wrote, “I came in person but no one was available. I asked questions and I received no clear answers. I hired a lawyer, but you did not accept. I did not talk to any media so that you would not say that I breached the laws. Today, after 82 days, I decided to write my request in this manner, may it reach you… before it is too late!”

Another hunger striker is 32-year-old Elham Modarresi. She is a painter from Sanandaj who took care of her mother and sick brother. Reports indicate that Elham was subjected to severe psychological torture and abuse in prison and was interrogated with blindfolds for long hours. They told her that her sick brother was in the next room and if she did not confess, they would kill him.

Elham Modarresi was arrested on November 2 at her home in Fardis, Karaj, and transferred to Kachouii prison. During her detention, she was denied access to a lawyer. She suffers from a genetic liver and intestinal disease that can lead to death under pressure.

She has a severe drop in blood pressure and body numbness, but the interrogators have told her that they will send her to the hospital only if she cooperates with them and admits that she was the leader of the protests.

Recent reports indicate that Elham Modarresi has been beaten severely to stop her hunger strike.

Hamideh Zeraii, 37, from Rasht, is another one of the 15 young women who started a hunger strike despite being anemic.

She was a master’s student at Tehran’s Azad University, the research and sciences branch. She was arrested on November 3, in the 40-day memorial of Hadis Najafi in Karaj, and is currently imprisoned in Kachouii Prison.

Hamideh Zeraii and other arrested women were blindfolded and beaten for 15 hours.

Like most prisoners, she was denied the right to have a lawyer. Her trial was held on December 29, 2022, in Branch 1 of Tehran’s Revolutionary Court, leveling false charges such as mass murder and blocking the street against her.

Fatemeh Nazari-Nejad, 39, from Karaj, was arrested during the 40-day memorial of Hadis Najafi on November 3, 2022, and taken to Kachouii Prison. During her detention, she developed digestive diseases and is not in good condition, causing concern to her family.

Niloufar Shakeri, 29, was kidnapped from her home in Gohardasht, Karaj, at 10 p.m. on October 11, 2022. She was under interrogation and in custody until December 24. Then she was transferred to Kachouii Prison. Niloufar is suffering from anemia and has a severe physical condition. She needs to be treated for intestinal bleeding.

Niloufar Shakeri’s detention was scheduled for 30 days, but she has been in prison for two months, and they do not release her. According to Niloufar’s mother, they have brought severe charges against Niloufar, and her trial was held on January 5.

Niloufar Kardouni, 26, from Karaj, was arrested in Karaj on September 18, 2022. She is the mother of a little girl. She was sentenced to five years in prison in an online trial.

Fatemeh (Forough) Jamalpour, 37, is a single mother and the sole guardian of two children. She was violently arrested in Gohardasht, Karaj, on October 26, during the protests related to the 40-day memorial of Mahsa Amini. She is incarcerated in Ward 4 of the women’s ward in Kachouii Prison.

She has been sentenced to 5 years in prison and two years of exile in an online court of branch one of Karaj Revolutionary Court on the charge of “leading the protests.” Her family has not yet been informed about her charges.

Fatemeh Harbi is 38 years old and the mother of a teenage girl and a sick 8-year-old child. Fatemeh Harbi was arrested on October 17 for removing her scarf at her workplace in Gohardasht, Karaj. She was tried by Asef Al-Hosseini and sentenced to 5 years of imprisonment and two years of exile because her shawl dropped and her red hair was visible. Initially, a bail of 1 billion Tomans was set for Fatemeh Harbi but was rejected.

During the last call with her family, she said that during the three months, she has been in the quarantine ward in Kachouii prison, they have not been included in the prison statistics. There is only one toilet for 30 to 40 women in the quarantine ward, and all the prisoners have intestinal infections. The prison’s doctor made a diagnosis but did not give medicine to any of them. The authorities have not taken care of the ward’s sanitary condition. Their cases and objections are ignored. They were beaten several times for protesting the prison conditions.

Jasmine Haj Mirza Mohammadi, 25, is a student at Tehran’s Soura University, and a schoolteacher. She was abducted during the 40-day memorial of Hadis Najafi in Behesht-e Sakineh cemetery in Karaj on November 3. She was under the pressure of Falahati in Kachouii Karaj prison until December 10 to obtain forced confessions from her, but she did not give in. Jasmine was not allowed to get a lawyer. The case’s investigator wrote everything Jasmine had not accepted and delivered it to the Revolutionary Court of Karaj and Judge Asef Al-Hosseini.

In an online court, Jasmine Haj Mirza Mohammadi was sentenced to 5 years for “collusion with the intention of committing crimes against internal security” and “propaganda against the state through shouting slogans.” In the same verdict, Jasmine has been deprived of education for two years.

Marzieh Mir-Ghasemi, 29, has been caring for her sick mother, who is suffering from diabetes.

She was abducted from her home in Karaj on September 28 in a nightly raid by plainclothes agents (one woman and five men). Marzieh’s family searched for her for two months and did not know her whereabouts without receiving any answer from the courts and prosecutor’s offices.

Marzieh was forced under severe torture to make confessions against herself, and the sentence issued for her in a closed and online court is based on these false confessions. Marzieh has not been allowed to access a lawyer or have visitations.

Somayyeh Massoumi, 38, from Karaj, an English language teacher, and mother of a 9-year-old child, was paying her weekly visit to the tombs of her parents and brother. She is held in Kachouii prison in Karaj, and the authorities do not accept bail for her. Somayyeh Massoumi has been harassed and abused in jail.

Ensieh Moussavi was arrested along with her mother. Her charges are not known.

Fatemeh Mosleh Heydarzadeh was sentenced to 5 years in jail, two years of exile to Ardabil, and two years staying away from Tehran and Karaj on charges of blocking the road insulting the security forces, and burning her shawl.

Fatemeh Mosleh Heydarzadeh is one of the 15 female protesters on a hunger strike in Karaj’s Fardis Prison (Kachouii).

She was arrested on September 19, 2022, in Gohardasht of Karaj and transferred to Kachouii prison.

There is no photo or information about Shahrzad Derakhshan.

Maedeh Sohrabi, 23, is an artist and a young woman known for her kind heart who lives in Karaj and used to work as a model.

She has been sentenced to 5 years in prison and two years of exile, which is not final.

As you can see, some of these 15 young women on strike are mothers. Some were their family’s only breadwinners or guardians. Some have gone on hunger strikes despite suffering from dangerous diseases and being tortured. These examples show the fighting spirit of the brave women who, despite brutal repression, are leading the Iranian revolution and uprising. And they deserve the support of all women worldwide who seek equality.

Reyhaneh and Ghazal Pakzad arrested and taken to an unknown location