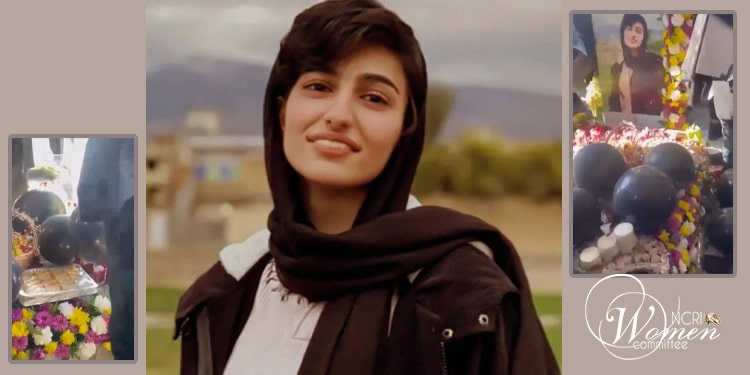 Donya Farhadi commemorated 40 days after being murdered by security forces

On the 126th day of the nationwide uprising in Iran, the people of Izeh commemorated Donya Farhadi on Thursday, January 19, 2022, forty days after her death.

Donya Farhadi, 22, was a student of architecture at Azad University of Ahvaz, the capital of Khuzestan Province, southwestern Iran.

Her family found her lifeless body on December 15, 2022, on the shores of the Karun River.

Donya Farhadi disappeared on December 7, 2022, after a quarrel with members of Basij at the university.

By tracking her mobile phone, the police reached Karun and saw traces of blood, and through tests, they found out that the blood belonged to Donya. Finally, her body, pierced by bullets, was found on December 15.

State media announced the cause of Donya Farhadi’s death as “self-inflicted jumping from the bridge and drowning in the Karun River.” (The state-run Khordad.news – December 17, 2022) But recently, it has been revealed that the fishermen of Kut Abdullah found the lifeless body of Donya Farhadi. After receiving her body, the Farhadi family realizes that she was shot three times in the chest.

The brave people of Izeh turned the 40-day memorial of Donya Farhadi into an anti-regime demonstration. They cried out, “Death to Khamenei, damned be Khomeini,” “This perished flower is dedicated to the homeland,” “They took our Donya and brought back her corpse,” and “Bakhtiaris would die but never accept humiliation.”

The Iranian people’s nationwide uprising has entered its fifth month despite a massive crackdown with widespread arrests and even the execution of four protesters.

The regime makes up false scenarios to cover up its extrajudicial executions of dissidents.

The mullahs’ Judiciary has handed down death sentences, heavy prison times, and flogging sentences to those arrested during the protests over the past four months. The protesters are tried in summary trials or five-minute online courts without having access to a lawyer of their own choosing.

The number of detained protesters is estimated at 30,000. The Judiciary uses their forced confessions extracted under torture to accuse them of bogus charges.