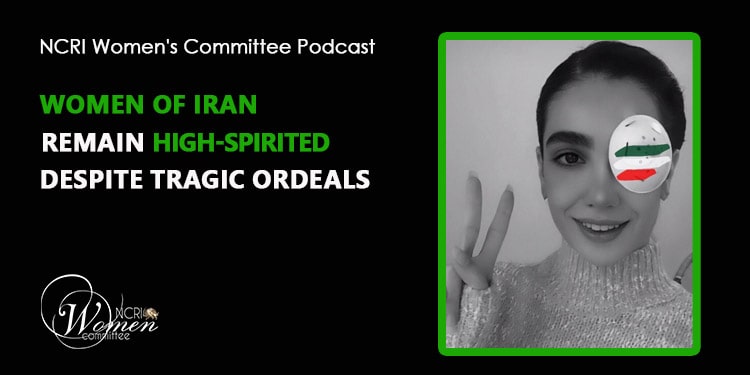 Today, we bring you the inspiring stories of a series of women who have suffered very much during the recent protests in Iran but remain high-spirited in their fight for freedom.

We begin with a young woman whose story leaked to social media first in October and then to international media in November.

Armita Abbassi, 21, was gang raped many times while under interrogation in a detention center. On October 17, the staff of a hospital in Karaj encounter this young woman in the emergency room.  Her head had been shaved, and she was shaking violently. The medical staff first thought she had cancer, but later, they found out she was bleeding from her rectum due to repeated rape.

The hospital’s medical staff were the ones to leak Armita’s case to social media.

One would imagine that any woman going through such an ordeal would be broken and crushed. But we hear that Amrita is once again standing up for her rights.

On January 2, she started a dry hunger strike in Fardis Prison of Karaj to protest the prison authorities’ beating them for objecting the unsanitary prison conditions.

14 other women joined Armita to protest their prolonged detention without standing trial.

Now each of these 14 women have their own inspiring stories.

As you might be aware, blinding the protesters has been one of the mullahs’ inhuman ways to crush the uprising. The state security forces deliberately target protesters in the eye.

Scores of protesters have suffered ruptured eyes after security forces targeted them with metal pellets and rubber bullets.

Citing doctors and medical facilities in Iran, the New York Times reported in mid-November that hundreds of protesters had suffered severe eye injuries inflicted by Iranian security forces. Ophthalmology wards in hospitals have been inundated with hundreds of eye wound victims. The range of injuries have included mutilated retinas, severed optic nerves, and punctured irises. Dozens of women are among those suffering eye injuries.

Again, put yourself in their shoes. You lose your eye or eyes just for participating in a legitimate protest to demand your freedoms. Then security forces target you in the eye. You can imagine that one’s life completely changes after becoming blind either in one or both eyes. Aside from the initial pain and suffering, you can’t see and you have to deal with this major disability for the rest of your life.

And if you’re young, you lose your beauty to the end of your life. You may even lose your job, and even your friends and family.

Now, let’s go over the stories of some the women who became blind to learn of the fighting spirit of these brave women, who are paying the price of freedom.

Ghazal Ranjkesh is a law student in Bandar Abbas. She was targeted in the eye as she was passing the street on November 15. After the first surgery, she wrote in a post: “The last image my right eye recorded; it was the smile of the man who was shooting at me.”

Numerous pellets destroyed her eyeball, eyelid, and part of her face.

On January 12, on the eve of her enucleation operation to prepare for an artificial eye transplant, she wrote in this post: I will get used to it because I survived, and I have to live;

Because I have a story that is still ongoing… Because I still haven’t seen the day that I “must” see, I know it’s close. Very close.”

Elaheh Tavakkolian is a Ph.D. student from Khorasan. She lost one eye in mid-September in the early days of the Iran uprising. Security forces shot her by pellet guns.

She wrote in an Instagram post: “Three months have passed and after three eye operations, I am still smiling. And for the last operation in the next few days, I will smile more, even if my eye no longer has light.”

In another post addressing the Iranian regime, she wrote: “You targeted my eye, but my heart still beats for Iran!”