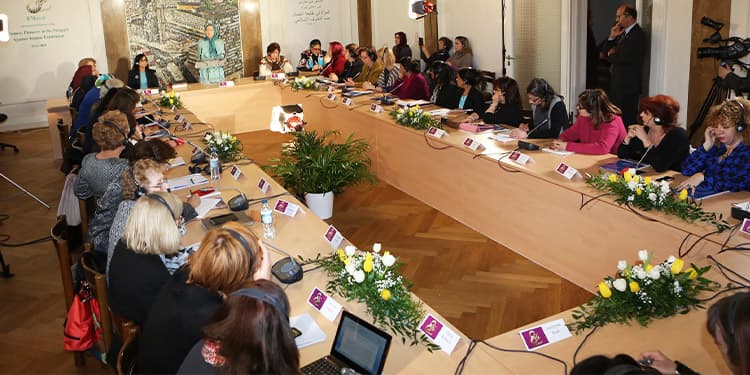 The NCRI Women’s Committee works extensively with Iranian women outside the country and maintains permanent contact with women inside Iran. The Women’s Committee is actively involved with many women’s rights organizations, NGOs, and the Iranian diaspora.

The NCRI Women’s Committee is a major source of much of the information received from inside Iran with regard to women. Attending meetings of the UN Women, the UN Commission on the Status of Women (CSW), the Human Rights Council, and other international or regional conferences on women’s issues, and engaging in a relentless battle against the Iranian regime’s misogyny are parts of the activities of members and associates of the NCRI Women’s Committee.

The NCRI Women’s Committee is one of the 25 committees of the National Council of Resistance of Iran.

The NCRI Women’s Committee believes in gender equality in political, social, and economic arenas. We are also committed to equal participation of women in political leadership.

Any form of discrimination against women will be abolished. They will enjoy the right to freely choose their clothing.

The NCRI Women’s Committee is committed to the Convention on the Elimination of All Forms of Discrimination against Women (CEDAW).

The NCRI Women’s Committee regularly reports to the UN on the plight of women under the mullahs’ regime in Iran, some of which are as the following:

Climate Change in Iran, Women are the prime victims, and the clerical regime is the main culprit (Report to CSW66), March 2022

What was the fate of the bill to prevent Violence Against Women in Iran? – February 2020

Plan for Freedoms and Rights of Iranian Women

Adopted by the National Council of Resistance of Iran, April 1987

As with other council ratifications for the post-Khomeini era, the declaration specifies the future Provisional Government’s plan of action regarding the rights and liberties of women. The articles of the declaration are as follows:

1- The right to elect and be elected in all elections and the right to suffrage in all referendums.

2- The right to employment and free selection of profession, and the right to hold any public or government position, office of the profession, including the presidency or judgeship in all judicial institutions.

3- The right to free political and social activity, social intercourse, and travel without the permission of another person.

4- The right to freely choose their clothing and covering.

5- The right to use, without discrimination, all instructional, educational, athletic, and artistic resources; and the right to participate in all athletic competitions and artistic activities.

6- Recognition of women’s associations and support for their voluptuary formation throughout the country; consideration of special privileges in various social, administrative, cultural, and particularly educational fields in order to abolish inequality and the dual oppression of women.

7- Equal pay for equal work; prohibition of discrimination in hiring and during employment; equal access to various privileges such as vacations, retirement benefits, and disability compensations; enjoyment of child and marital benefits and unemployment insurance; the right to salary and special accommodations during pregnancy, childbirth, and care of infants.

8- Absolute freedom in the choice of spouse and marriage, which can take place only with the attainment of legal age, is prohibited; in family life, any form of compulsion or coercion of the wife is prohibited.

9- Equal right to divorce; divorce must be processed by a qualified judicial court; women and men are equal in presenting grounds for divorce; child custody and support as well as financial settlements will be determined by the verdict for divorce.

10- Support for widowed and divorced women and for children in their custody; care will be provided through the National Social Welfare System.

11- Elimination of legal inequalities with regard to testimony, guardianship, custody, and inheritance.

12- Polygamy is prohibited; under special circumstances, the law would specify the appropriate arrangements.

13- Prohibition of all forms of sexual exploitation of women on any pretext and abrogation of all customs, laws, and provisions authorizing the father, mother, parent, guardian, or another to bestow a girl or a woman, on the pretext of marriage or other, for sexual gratification or exploitation.
The above declaration was unanimously ratified and signed on April 17, 1987, by all member organizations and personalities of the National Council of Resistance.