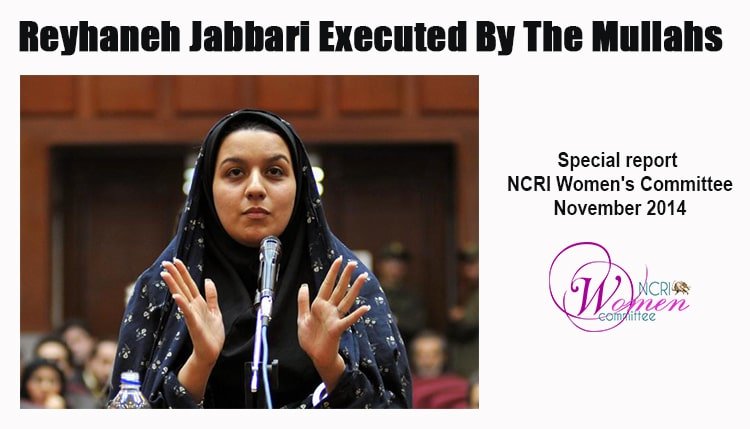 Reyhaneh Jabbari, 26, was executed at the break of dawn on Saturday, October 25, 2014 in Gohardasht Prison in Karaj, west of Tehran. She had already spent 7 years in prison.

Jabbari, a decorator, was 19-years old when charged with murdering Morteza Sarbandi, a 47-year old married doctor who had three children and was a former employee of the Ministry of Intelligence (MOIS). Jabbari, defended herself against the MOIS employee’s attempt to rape her.

Ahmad Shaheed, the United Nations Special Rapporteur on Human Rights in Iran, had at the time described her death sentences as inadmissible and unfair. He cited credible documents that proved Jabbari was innocent of premeditated murder charges. The UN Special Rapporteur emphasized if Jabbari’s claims are true she is twice a victim: once by the individual who intended to rape her; and second, by the judicial system that must protect individuals against sexual and physical aggression.

Jabbari was convicted after a deeply flawed trial process and later executed, despite international efforts to see a fair trial and halt it. Reyhaneh was also put under savage torture by the clerical regime’s henchmen to extract forced confessions.

Reyhaneh Jabbari was laid to rest on October 25, 2014 in Tehran’s Behesht-e Zahra Cemetery. This is while state authorities had dispatched over 150 armed forces to encircle the site and did not allow anyone to deliver any speeches in her memory.

Since then, brave Iranians inside Iran have protested the execution despite threats of arrests. Hundreds of people have expressed solidarity with Reyhaneh calling her a symbol of a girl who never succumbed to the misogynist laws of the mullahs’ ruling Iran. Her will has been echoed throughout the world creating more antagonism against the Iranian regime and sprouting hope that Iran will soon be freed of such tyranny.

A brief look at the history of this case:

– 13 April 2014 – Amnesty International warns: “The death sentence of Iranian woman Reyhaneh Jabbari has been sent to the Office of Implementation of Sentences in Tehran, Iran. Once death sentences have gone to this body, they may be carried out at any time. Reyhaneh Jabbari, aged 26, was arrested in 2007 for the murder of Morteza Abdolali Sarbandi, a former employee of Iran’s Ministry of Intelligence.”

– 14 April 2014: A group of people rallied outside the judiciary in Tehran to save Reyhaneh Jabbari’s life. Security agents attacked and dispersed the protesters.

– 15 April 2014: Ahmad Shaheed, UN Special Rapporteur on Human Rights in Iran, called on the regime to stop the execution of Reyhaneh Jabbari on the charges of murdering an MOIS agent.

– 30 September 2014: Amnesty International issued a statement saying: Reyhaneh Jabbari has been transferred to Gohardasht Prison to be executed, and it is possible she will be executed today, Tuesday.

– 30 September 2014: State agents in Gohardasht Prison responded to follow-ups made by Shole Pakravan, Reyhaneh’s mother and said: “She has been transferred to this prison. Reyhaneh is on death row and come tomorrow to receive her body!”

– 1 October 2014: Reyhaneh Jabbari’s lawyer said: “Currently her case has been sent for the ruling to be carried out. However, there are no orders in the case.” State-run ‘Iran’ daily said on Reyhaneh Jabbari’s execution: “A 10-day period was granted to her so her family could gain the consent of the victim’s family.”

– 8 October 2014: State-run ‘Mehr’ news agency wired a report entitled “Reyhaneh Jabbari to be executed tomorrow” reading in part: “Tomorrow, the 10-day grace period granted to Reyhaneh Jabbari comes to an end and she will be sent to the gallows if she cannot gain pardon from the victim’s parents.”

– 13 October 2014: European Parliament President Martin Schultz called for Reyhaneh Jabbari’s execution to be stopped. In a letter to Larijani, Iran’s Majlis (parliament), Schultz said, “The European Union has a strong and principled viewpoint opposing the death sentence. Cancelling this ruling is amongst this union’s concrete objective of human rights policymaking.”

– 17 October 2014: Reyhaneh Jabbari is once again on the verge of execution. Mohammad Shahriari, head of Tehran’s criminal prosecution said the victim’s parents are not willing to pardon and therefore there is a possibility that Reyhaneh Jabbari’s death sentence will be carried out.

– 25 October 2014: Reyhaneh Jabbari, a 26-year old student and designer, was executed in Gohardasht Prison at dawn.

– 25 October 2014: Mrs. Maryam Rajavi, President-elect of the Iranian Resistance, described the execution of student and decorator Reyhaneh Jabbari as yet another sign of the mullahs’ viciousness and misogynist nature. She called on all international human rights organizations to strongly condemn this young woman’s execution and take immediate binding action to stop executions, torture and massacres in Iran.

– 26 October 2014: The funeral of Reyhaneh Jabbari was held on the morning of Sunday, October 26 amid tight security measures in block 98, row 13 of Tehran’s Behesht-e Zahra Cemetery. Her family, friends and people joined the ceremony and laid flowers and expressed condolences to her family. State officials had stationed nearly 300 State Security Force agents and other security forces in all streets of this cemetery to keep a close watch on the participants in the funeral.

– 28 October 2014: Ed Royce (R-CA), Chairman of the US House of Representatives Foreign Affairs Committee, issued a statement in response to the UN’s investigation highlighting worsening human rights conditions in Iran. This text reads in part: “… Just this past weekend, the Iranian regime hanged a 26-year old woman, Reyhaneh Jabbari, whose only crime was defending herself against rape.           The regime’s response to the recent acid attacks on Iranian women is appalling but not surprising… I fear that Iran’s Basij militia will see this new law as an even more liberal license to attack Iranian women for how they are dressed. Hopefully Iranian society will step up to these acts of cowardice.”

– 29 October 2014: Rupert Colville, UNHCR spokesperson condemned Reyhaneh Jabbari’s execution. He said he was shocked from this hanging. Colville had expressed concerns about increasing executions in Iran at a press conference in Geneva held October 28, 2014.

– Amnesty International – 25 October 2014: AI condemned the execution of Reyhaneh Jabbari as “another bloody stain on Iran’s human rights record” and “an affront to justice.”

“The shocking news that Reyhaneh Jabbari has been executed is deeply disappointing in the extreme,” said Hassiba Hadj Sahraoui، Amnesty International’s Deputy Director for the Middle East and North Africa Programme. “Once again Iran has insisted on applying the death penalty despite serious concerns over the fairness of the trial.”

– US State Department Website – 25 October 2014: Jen Psaki, Department Spokesperson: “We join our voice with those who call on Iran to respect the fair trial guarantees afforded to its people under Iran’s own laws and its international obligations.”

“I am very concerned and saddened that it has been used in the case of Reyhaneh Jabbari.”

– CNN – 25 October 2014: “Reyhaneh Jabbari, 26, was sentenced to death for the 2007 killing of Morteza Abdolali Sarbandi, a former employee of Iran’s Ministry of Intelligence and Security. The United Nations has said she never received a fair trial. The U.S. State Department also said there were concerns about the trial.”

– Reuters – 25 October 2014: “Reyhaneh Jabbari walked to the gallows at dawn on Saturday in Tehran’s Evin prison after failing to secure a reprieve from the dead man’s relatives within the 10-day deadline set by sharia law in force since the 1979 Islamic Revolution.”

– Agence France Presse – 25 October 2014: “Iran executed Saturday a 26-year-old woman who had spent five years on death row for the murder of a former intelligence official, defying international pressure to spare her life”.

– The Independent – 25 October 2014: “Ms Jabbari’s mother Shole Pakravan confirmed her death. She said her 26-year-old daughter was hanged in a Tehran prison and she was due to see her daughter’s body at the cemetery today”.

– Guardian – 25 October 2014: “Iran has ignored an international campaign to spare the life of a 26-year-old woman convicted of murder by hanging her at dawn on Saturday.The UN and bodies including the European Union and Amnesty International had said that the interior designer’s confession for killing Morteza Sarbandi in 2007 was obtained under intense pressure and threats from Iranian prosecutors, and she should have had a retrial”

– Associated Press – 27 October 2014: “Ahmed Shaheed spoke Monday, a day before presenting his report on Iran to the General Assembly’s human rights committee. Shaheed says he’s never been allowed into Iran and has been banned every year since he was appointed in June 2011. Shaheed again condemned the execution on Saturday of Reyhaneh Jabbari, a woman convicted of murdering a man she said was trying to rape her.”

– The New York Times – 28 October 2014: “A United Nations investigator said on Monday, drawing attention to rights abuses just as Iran’s president is pushing for a diplomatic breakthrough with the West. Mr. Shaheed said he had been shocked by the execution on Saturday of Reyhaneh Jabbari, 26, who was convicted of killing a man she had accused of raping her.”