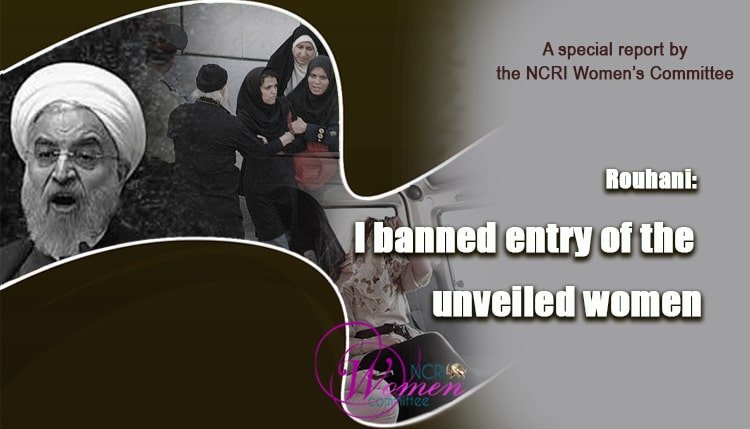 Rouhani: I was the one to ban the entry of unveiled women

Rouhani: I was the one to ban the entry of unveiled women
NCRI Women’s Committee – May 2015

Forced veiling has been one of the Iranian regime’s most basic means to suppress women in Iran. This has been the foundation of many of its repressive laws and vicious attacks by security forces, paramilitaries and plain-clothe agents against the freedom-loving women of our country.

The mullahs’ so-called moderate president, Hassan Rouhani, recently mentioned in his autobiography that one of his achievements was the implementation of mandatory veil as a basis to oppress Iranian women.

Veiling was one of the top disputed topics on women from the onset of the anti-monarchic revolution. Various persons and parties had different points of view on this matter. At that time, Hassan Rouhani was sent to the army on Khamenei’s proposal because of his background in the military. Mandatory veiling for women was one of his very first responsibilities. State-run “Afkar news” has recorded Rouhani’s memories on this issue on May 4, 2015, from the “Islamic Revolution documentary center“. The following is an excerpt:

In March of 1979, putting forward veiling for women was not easy, this matter occupied the minds of officials for a long time. The ministerial departments and offices resumed their activity after February 11 as schools opened on the early days of March. A large number of women-employees and girl-students turned up unveiled and bareheaded, veiled ladies being a minority. Some hospital nurses, female-doctors and women-teachers were also commuting to their work-places in addition to unveiled women in the streets. “Imam” [Khomeini] pointed out also that is was obligatory for women to get veiled which led to a demonstration by some unveiled women, staging a sit-in outside the Courthouse and the Prime Ministry building. Mr. Taleghani [a progressive religious dignitary] reacted with a speech saying that there is no forced veiling and women should make their own choice. Mr. Taleghani’s point of view differed with that of other scholars.

Political groups, including the People’s Mojahedin [PMOI/MEK] were releasing statements opposing forced veiling. Concisely, as I pointed out: Mr. Taleghani stated in his speech that “we cannot compel women adhering to the monotheistic religions to get veiled, but we do encourage them; anyway we should not force any one to get veiled.” We decided however in the army headquarter to declare veiling as mandatory for women as a starting point for other ministerial offices and departments.

Being entrusted with implementing the compulsory veiling plan in army related offices, I gathered all the women-employees of the joint-general-staff, about 30 persons, discussing and telling them they will have to be veiled in the workplace from now on. Except for two or three of them who wore scarves, all women protested and complained, but I stood firm asserting: the guard has received orders to prevent the entry of any unveiled woman to any premises related to the joint-general-staff as of tomorrow.

After the headquarters, it was the turn for the army’s three branches. First I went, to the Doshantappeh garrison, gathering all the women-employees who were a large number in a hall, telling them about the plan to veil. They made a lot of noise, but I decisively stressed, “This is an order and no refusal will be accepted.” Finally I also told them that we have ordered the guard to not let any unveiled women to entry the base as of tomorrow. Finally, we circulated a letter and veiling became mandatory.